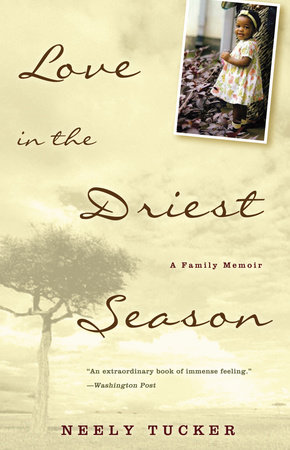 When foreign correspondent Neely Tucker and his wife,Vita, are transferred from Warsaw, Poland, to Zimbabwe in 1997, they are thrilled with the assignment and eager to put down roots in their new home. Yet not even Tucker’s hands-on experiences reporting from the most violent and lawless corners of the globe could prepare them for life at the epicenter of the worldwide AIDS epidemic. With an AIDS death approximately every twenty minutes, an average life span of thirty-eight, hundreds of thousands of babies orphaned or abandoned, and an acute, collective denial about the causes of the disease and the necessity of testing, the Zimbabwe the Tuckers encounter is a nation spiraling out of control. Tucker writes, “The scale of death, and the depths of misery it entailed, defied the imagination even for someone like me, who had chronicled some of the world’s deadliest conflicts for the better part of a decade.”

In an attempt to ground themselves and make a fraction of a difference in the unfolding political and social chaos, the Tuckers begin volunteering at Emerald Hills Children’s Home, a state-run orphanage set in an industrial slum on the south end of Harare. To their dismay, and despite their stopgap efforts at modernizing the facility, Tucker and Vita watch helplessly as thirty-five infants die there in twenty-four months. It is in this climate of despair and fear that the couple meets Chipo, the baby who will change their lives forever. Left to die in a field outside of town, Chipo is a tiny survivor in the deadly environment of the orphanage, holding on to life even as her weight plummets to just over four pounds and she wrestles with respiratory failure. For Tucker and Vita, it’s love at first sight, and they begin their maddening race to simultaneously keep Chipo alive and wade through the excruciating bureaucratic red tape of Zimbabwe’s adoption laws. Meanwhile, President Mugabe’s virulent anti-American sentiments reach a boiling point, and the Tuckers are suddenly no longer safe under a regime that labels its foreign journalists “enemies of the state.”

This unforgettable, at times shocking, story of love flourishing in the most hostile environment imaginable combines Tucker’s shrewd eye for journalistic detail and his heartfelt conviction as a new father. This guide is designed to direct your reading group’s discussion of Love in the Driest Season.

1. When the arrival of Tucker’s and Vita’s luggage in Zimbabwe precedes the granting of Tucker’s work permit, Tucker is charged by a senior officer in Zimbabwe’s Department of Immigration Control with American arrogance, and he is obliquely accused of racism: “You think little black Zimbabwe needs big white American men like you.” This assumption of American hubris becomes all too familiar later as Tucker and Vita confront Zimbabwe’s convoluted child welfare system. How much energy does Tucker put into proving the theory wrong? With whom does he succeed? Are there any points at which he inadvertently personifies the hated American stereotype?

2. Raised amid the devastating poverty and racism of rural Mississippi, Tucker escapes his surroundings and gets a sense of perspective through voracious reading. “I began to get a sense of where I was. It would eventually form one of the central lessons of my personal and professional life: I had been raised in the heart of the most racist state in America, and as a child, I had accepted the perverse as normal.” What “perversions” are he and Vita asked to accept as normal in Zimbabwe? Had they been able to stay in Zimbabwe indefinitely, as planned, do you think these perversions would have become more or less palatable to them?

3. Tucker writes: “I had the working idea that there was a higher form of truth to be found in the world’s most impoverished and violent places, a rough-hewn honesty that could not be found elsewhere. Life had a tautness to it there, a sheen that seemed to say something about the way the world was, not how anyone wanted it to be.” What do you think of Tucker’s “working idea”? What toll does living in these conditions exact from him and his colleagues, and is it worth it? How does his idea evolve after he falls in love with Chipo?

4. Tucker’s story graphically describes the horrors of the sub-Saharan AIDS epidemic, zeroing in on Zimbabwe, where AIDS has created a public health disaster on an unprecedented scale and where one in every four young adults is thought to be infected with the virus. But he touches only briefly on the social mores that have prevented most of the dying from ever being tested for HIV, as well as the Western ethical conflicts that have prevented a more aggressive anti-AIDS program from being introduced from abroad. Why do you think he keeps his opinions on these matters to a minimum? Would more political editorializing detract from Chipo’s story, in your opinion?

5. Why do the deaths of Ferai and Robert hit Tucker and Vita so hard? Are they naïve to be shocked by these fatalities? Tucker writes: “After Robert’s death, something ticked over in me, in Vita, and in our relationship . . . his death seemed to hang over us, an unseen and unmentioned influence that seeped into our lives . . .” How does it affect them?

6. When Chipo’s HIV test comes back negative, Tucker and Vita are elated: “I kept staring at the test result as if it were a winning lottery ticket.” How would Tucker’s memoir have been different if Chipo had been HIV-positive? Would their adoption process have proceeded any differently?

7. Six months before the parliamentary elections that will likely wreck havoc on all foreign journalists remaining in the country, and at the lowest point in Tucker and Vita’s seemingly endless wrangling with the welfare system, Tucker makes an uncharacteristic, almost naïve statement: “We wanted her more than the department did and, eventually, desire trumps bureaucracy.” How do you explain this burst of optimism?

8. . Tucker is forced to make a chilling decision between possibly helping thousands of unknown children and concretely rescuing one specific child. “Perhaps I could have written stories that, by their detail and close reporting, might have led nongovernmental organizations or private individuals to designate lifesaving help for any number of children. I could have demonstrated how the government’s decision to spend tens of millions of dollars to send troops to fight in another country’s civil war affected its own orphaned children. . . . But there was no point if it endangered the life of one child, one who meant more to me than all the others. I had broken the first rule of Journalism Ethics 101: Never get personally involved in a story you are assigned to cover.” Discuss the ethical implications of Tucker’s decision.

9. When the state-owned Sunday Mail runs an article stating that the Zimbabwean government has run out of resources with which to handle orphaned children, and urging families and local communities to rally and “take the burden off Government and bring an end to the anguish of these children,” Tucker is floored, not only by the government’s apparent “willingness to turn truth on its head,” but by its nonchalance in passing the buck to an already overextended public. Can you find any instances in the United States in the last fifty years, in which the federal government encouraged the privatization of matters some people consider to be the government’s responsibility?

10. “Developing a detachment from the suffering you witness and write about is a professional necessity, of course, but it can also become a job hazard of sorts,” writes Tucker. “It’s a steady erosion that diminishes your heart, drop by drop, bit by bit.” Discuss Tucker’s sudden conversion to caring. Is the switch profound and permanent, or does his previous attitude linger? How does his transformation affect his ability to process stress? How does it affect his marriage?

11. Tucker describes how, despite Mugabe’s dramatic and carefully orchestrated campaigns to “whip up anti-American rancor,” most Zimbabweans simply didn’t seem to care. How do you explain this public apathy?

12. Discuss how Tucker’s history forms his unorthodox view of what constitutes a family–“something that goes beyond bloodlines and shared last names.” Is this attitude vital to successful adoption?

Learn More About Love in the Driest Season
print

Pretty Is What Changes

The Possibility of Everything

Scattershot
Back to Top