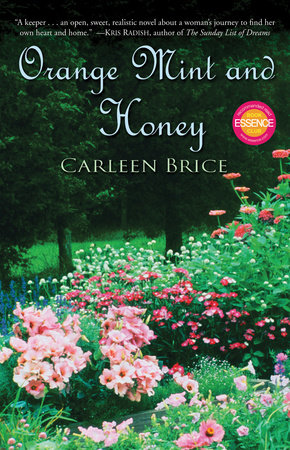 1. Forgiveness is a central theme in the novel. Explore the ways in which Shay, Nona, Stephanie, Lois, Ivy, and Oliver take steps to forgive or not forgive one another. How does each person redeem (or not) him- or herself?

3. In what ways does Shay show her love and hate for her mother? Do you feel more sympathetic toward or side with either of the two women more than the other? Why?

4. At what point in the novel does Shay stop constantly recounting her mother’s past? In what ways does Shay ﬁnally start to open up to Nona?

5. Motherhood is a pivotal theme in Carleen’s debut novel: There are many mothers and daughters, surrogate mothers, and surrogate daughters in Orange Mint and Honey. Discuss the roles of motherhood–and daughterhood–each of the main women characters play. What makes a woman a mother?

6. Throughout the novel, Shay is on the cusp of womanhood. At what point(s) does she decide and actually begin to grow up and embrace her future? Pinpoint in your own lives a moment or experience in which you started to become an adult woman.

7. There are several sisters and surrogate-sister relationships in Orange Mint and Honey: Shay and Sunny, Lois and Nona, Ivy and Shay. Explore each dynamic and how they are sisters to each other.

8. Throughout the novel, Shay is determined to make Nona “pay” for her past mistakes as a mother. At a gathering of recovering alcoholics Shay thinks: “Where were the signs of the wrong choices they had made? Years of drinking should have ravaged these women. I wanted scars.” And “It was all I could do not to run back into the kitchen and let her have it, but she wanted it too much. Silence was how I could make her pay.” Do you think Nona deserves Shay’s punishment? Why or why not? In your own life or in society as a whole, explore the various degrees of “mistakes” that mothers are allowed or not allowed to make. What are their consequences?

9. What do you think Nina Simone’s role in the story is? Why does Shay admire Nina so much? Explore the role music plays in Orange Mint and Honey.

10. Why do you think Shay pulls her hair (a condition known as trichotillomania)? In what ways does your body show its stress and overwhelming emotions?

11. Part of Nona’s recovery is working in the garden. What role does the garden play in Nona’s and Shay’s lives? In your own lives, is there a similar space that you see as healing?

12. Oliver is a powerful force in Shay’s life. What part did he play in her maturing and becoming a woman? Why do you think she decided not to continue her relationship with him? Do you think she could have–or should have–continued to be with him?

13. When Shay returns home, she sees that Stephanie’s home and her personal style are extremely different than what they used to be. What is the signiﬁcance of this? Discuss one of your close friendships that may have shifted after the two of you had been close in childhood or college. Why do you think that shift occurred?

14. After being in a relationship with Oliver and after yelling at Nona in church, Shay’s feelings had become “completely out of control” and an “emotional overﬂow.” Why do you think this happened and why is it signiﬁcant? Discuss a time in your own life when you have felt and done the same.

15. Shay tries so hard to not be like her mother. Throughout the novel, in what ways are Shay and Nona different, and in what ways do their choices and personalities become more similar? What about for you and your own mother or mother ﬁgure?

Dancing on the Edge of the Roof: A Novel (the basis for the film Juanita)

The Midwife’s Tale
Back to Top