Die for You Reader’s Guide 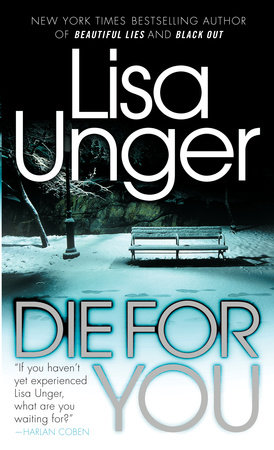 Die for You Reader’s Guide

print
Die for You Reader’s Guide

The questions, discussion topics, and suggestions for further reading that follow are designed to enhance your group’s discussion of Die for You, a spellbinding novel about love, marriage, and the secrets we keep from our families—and ourselves.

Isabel and Marcus Raine have been married for five years. She is a bestselling novelist; he’s an immigrant from the Czech Republic and the co-owner of a successful software company. One morning Marcus leaves for work, cheerfully shouting, “I love you” to Isabel as the elevator door closes. When he doesn’t come home that evening, Isabel is mildly worried; by 5:00 a.m. the next morning, she is oscillating between panic and rage. A call from Marcus’s cell phone changes everything: all she hears is a man howling in pain. Rushing to his office, she finds an FBI team corralling the employees and seizing the equipment. The next thing she knows she is in the hospital with a severe concussion. And a homicide detective is asking questions about her missing husband she herself never thought to ask.

In a desperate search for answers, Isabel looks back on the odd, sometimes painful aspects of her marriage: her beloved sister’s antipathy to Marcus; Marcus’s circumspect stories of his childhood; his brief, hurtful love affair; and his adamant objections to having a child. Defying the police and her concerned and loving family, Isabel flies to Prague and finds shocking evidence of whom her husband really is and the ugly truths that lie behind his disappearance.

1. Why does Die for You open with the scene in Prague? Does knowing how Isabel’s investigation ends affect your reactions to the decisions she makes as the novel unfolds? Does it add to or lessen the suspense and/or the power of the climatic scene that comes near the end of the book?

2. Compare Marcus’s reminiscences of falling in love with Isabel and the regrets he feels as he contemplates their marriage [p. 6] with Isabel’s memories and musings [p. 30]. To what extent do these passages reflect their individual personalities and the differences between the way men and women think about romance and marriage?

3. After their conversations about Marcus’s affair Isabel says, “Those problems we agreed existed . . . . were never actually addressed” [p. 27]. Are Isabel’s explanations of why she avoided bringing the subject up again and for keeping the affair a secret from those closest to her understandable?

4. Die for You contains numerous statements about how novelists experience the world. Isabel says, “Strictly by my estimate, the fiction writer notices approximately fifty percent more details than other people. . . . . This happens in a millisecond and I’m only barely conscious of it” [p. 59]. And Linda, thinking about her sister, says, “It was the curse of the writer, a feral hunger to understand and by understanding to control” [p. 98]. Are these observations, as well as Isabel’s description of her reaction to Marcus’s proposal [p. 66], their discussion about language [p. 131], and other comments throughout the novel, apt descriptions of the writer’s art? How do they relate to Unger’s writing techniques and style?

5. There are also insights into the photographer’s art [pp. 99, 102]. How does Linda’s work as a photographer and painter influence her perceptions of her family, her affair with Benjamin, and initial reaction to Marcus [p. 102-3]? What impact do the ways the sisters engage with people and view events have on your impressions of them? What are the strengths and the flaws of each approach?

6. Linda remembers “their father’s favorite proud refrain: ‘The Connelly sisters are lovely and smart.’ There wasn’t a brighter one or a prettier one. Linda and Isabel had never felt the urge to compete with each other in those arenas” [p. 101]. Have the choices they’ve made as adults changed their relationship, causing resentments and conflicts? What aspects of Linda’s life does Isabel envy? Do Linda’s thoughts about marriage and motherhood and her life as an artist [p. 116] suggest that she is also envious of her sister?

7. “Suicide marks you in a way that no other tragedy does—especially the suicide of a parent” [p. 107]. Is grief over a suicide different from other kinds of grief? How honestly do Isabel, Linda, and their mother, Margie, deal with the sense of abandonment, sadness, rage, and shame they feel? What explains Linda’s hostility toward her mother and her angry reaction to Margie’s announcement that she is getting remarried [p. 129-130]?  Why is Isabel more accepting of her mother’s behavior? In what ways does their father’s death shape the way his daughters think about men and marriage?

8. “She’d done the same with Erik, put her signature where her husband asked. Two smart women who knew better, who should have learned earlier, the hard way, not to surrender our power,” [p. 141]. Is this common among educated women today, and if so, why?

9. Discuss the conversation Isabel and Detective Crowe have about infidelity [p. 131-132] and Linda’s feelings about her affair [p. 147]. Whose point of view do you think is most realistic? Is Isabel right in saying that Crowe “still believed in fairy tales”? Is this also true of Linda? What do Linda’s reasons for having an affair, as well as her reaction to Erik’s “financial” infidelity [p. 220] reveal about her and her marriage?

10. Do the relationships between Linda and Erik, and Crowe and his ex-wife confirm Isabel’s reflection that “Love accepts, moves forward” [p. 133]? After she learns the full extent of Marcus’s deception, Isabel says “maybe, in my case, love accepts too much, wants to live so badly that it creates what it needs to survive” [p. 210]. Can you think of other examples in the book, in other novels, or in real life that represent this kind of love?

11. How does Unger bring to life the different aspects of Marcus’s character? What does she achieve by alternating between Isabel’s voice and a third-person narrator? Does Marcus have genuine feelings for Isabel or for other people he knows? What incidents support your answer? Do his childhood and the ties he has with his brother explain his behavior? Do they make him a more sympathetic character?

13. How is Jack different from the other men in Isabel’s life?  What is it about Jack that eventually brings them together?

14. Isabel’s quest to find and confront Marcus puts her and her family and friends in danger. Does her need to discover the truth justify the risks she takes?

Lisa Unger is the New York Times bestselling author of Beautiful Lies and Black Out. Her novels have been published in more than twenty-five countries. She lives in Florida with her husband and daughter.

Gone Without a Trace

The Lies We Told

The Boy at the Door

The Forgotten Girl
Back to Top