Everybody Was So Young Reader’s Guide 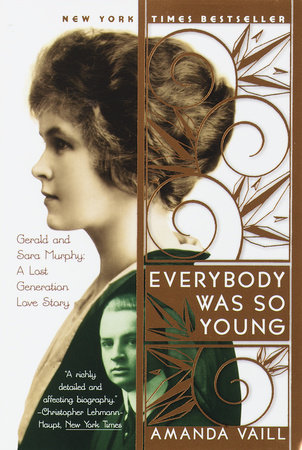 Everybody Was So Young Reader’s Guide

print
Everybody Was So Young Reader’s Guide

Reader’s Companion to Everybody Was So Young© 1999 by Broadway Books.

Gifted artist Gerald Murphy and his elegant wife, Sara, were icons of the most enchanting period of our time; handsome, talented, and wealthy expatriate Americans, they were at the very center of the literary scene in Paris in the 1920s. In Everybody Was So Young–one of the best reviewed books of 1995–Amanda Vaill brilliantly portrays both the times in which the Murphys lived and the fascinating friends who flocked around them. Whether summering with Picasso on the French Riviera or watching bullfights with Hemingway in Pamplona, Gerald and Sara inspired kindred creative spirits like Dorothy Parker, Cole Porter, and F. Scott Fitzgerald (Nicole and Dick Diver in Tender is the Night were modeled after the Murphys). Their story is both glittering and tragic, and in this sweeping and richly anecdotal portrait of a marriage and an era, Amanda Vaill "has brought them to life as never before" (Chicago Tribune).

1. Gerald and Sara Murphy were surrounded by artists and writers–from Cocteau to Dorothy Parker–who epitomized the modernist spirit of the 1920s. Was this accidental, or purposeful?

2. "The very rich are different from you and me," Scott Fitzgerald supposedly told Ernest Hemingway, to which Hemingway (who told this anecdote) replied, "Yes, they have more money." How well does each man’s statement apply to the Murphys?

3. "Only the invented part of our lives–the unreal part–has had any scheme, any beauty," wrote Gerald to Scott Fitzgerald in 1935. What parts of their lives did they "invent," and what parts were "the unrealistic things?" Do you agree with Gerald?

4. "Paris is bound to make a man either more or less American," Gerald Murphy told a newspaper interviewer in 1923. How was this statement true of Murphy, and of Cole Porter, Hemingway, MacLeish, Fitzgerald, Dos Passos, and the other expatriate artists of the period? What was it about Paris that made it happen?

5. To the Murphys, their children were "the real foundation of our future happiness." How would you evaluate the Murphys’ role as parents? Were they attentive and caring or narcissistic and irresponsible? In what ways did both Gerald and Sara act as surrogate parents for their own contemporaries?

6. The Murphys’ marriage was severely tested by five decades, but it endured. Why? What were the pressures on it? And was their relationship truly "a love story"?

7. Sara Murphy had close relationships with at least three men besides her husband: Scott Fitzgerald, Ernest Hemingway, and Pablo Picasso. Do you believe that these relationships were sexual or platonic? On what do you base your opinion?

8. "I was never happy until I started painting," said Gerald Murphy in 1956, "and I have never been thoroughly so since I was obliged to give it up." Why was he "obliged" to give up something he loved so passionately and which he did so well? Or was his statement misleading? Also, what hidden references to events or people in his life can you find in his pictures?

9. In A Moveable Feast, his posthumous memoir of 1920s Paris, Ernest Hemingway paints a cruel picture of the Murphys as the unnamed "rich" who seduced him into superficiality and infidelity. Why would he describe them in this way?

10. Are the Murphys just a footnote, or did they contribute something substantial to twentieth-century cultural history?

11. The media have often compared the 1990s to the 1920s. Judging from the social circles described in Everybody Was So Young, do you find many similarities between these decades? Are there any contemporary couples who have the Murphys’ role today?

12. Referring to Scott Fitzgerald’s Tender Is the Night, Sara Murphy said, "I hated the book when I first read it. I reject categorically any resemblance to ourselves or anyone we know–at any time." What differences and similarities do you see between the Murphys and Dick and Nicole Driver? Discuss the perceptions of the Murphys portrayed in Fitzgerald’s short story "Babylon Revisited," Ernest Hemingway’s The Sun Also Rises and "Snows of Kilimanjaro," Archibald MacLeish’s poem "Portrait of Mme G___M___" and his play J.B., and Pablo Picasso’s "Woman in White."

Amanda Vaill is a writer and critic whose work has appeared in numerous national publications. This is her first book. She lives in New York City.
Learn More About Everybody Was So Young
print

The Art of Rivalry
Sebastian Smee

The Power Broker: Volume 3 of 3
Robert A. Caro

The Lady in Gold
Anne-Marie O’Connor

In the Land of Pain
Alphonse Daudet

Is it evil not to be sure?
Lena Dunham

An African in Greenland
Tété-Michel Kpomassie