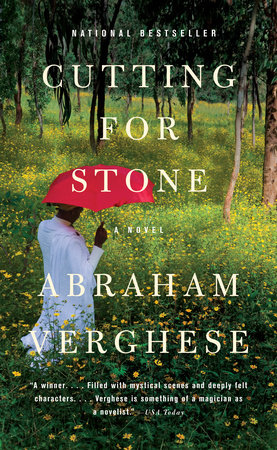 “A winner. . . . Filled with mystical scenes and deeply felt characters. . . . Verghese is something of a magician as a novelist.” —USA Today

The introduction, questions, and suggestions for further reading that follow are designed to enhance your group’s discussion of Abraham Verghese’s acclaimed novel, Cutting for Stone.

An epic novel that spans continents and generations, Cutting for Stone is an unforgettable story of love and betrayal, compassion and redemption, exile and home that unfolds across five decades in India, Ethiopia, and America.

Narrated by Marion Stone, the story begins even before Marion and his twin brother, Shiva, are born in Addis Ababa’s Missing Hospital (a mispronunciation of “Mission Hospital”), with the illicit, years-in-the-making romance between their parents, Sister Mary Joseph Praise, a beautiful Indian nun, and Thomas Stone, a brash, brilliant British surgeon. Mary and Thomas meet on a boat out of Madras in 1947; she follows him to Ethiopia and to Missing, where they work side by side for seven years as nurse and doctor. After Mary dies while giving birth to the twins—a harrowing, traumatic scene on the operating table—Thomas vanishes, and Marion and Shiva grow up with only a dim sense of who he was, and with a deep hostility toward him for what they see as an act of betrayal and cowardice.

The twins are raised by Hema and Ghosh, two Indian doctors who also work at Missing, and who shower Marion and Shiva with love and nurture their interest in medicine—part of the deep, almost preternatural connection the brothers share. They are so close that Marion, as a boy, thinks of them as a single entity: ShivaMarion.

Marion and Shiva come of age as Ethiopia hovers on the brink of revolution, and their lives become intertwined with the nation’s politics. Addis Ababa is a colorful, cosmopolitan city: the Italians have left behind cappuccino machines, Campari umbrellas, and a vibrant expat community. But they’ve also left a nation crippled by poverty, hunger, and authoritarian rule: Ethiopia in the 1960s and 1970s is both bolstered and trapped by its notorious emperor, Haile Selassie, and rocked by violence and civil war.

Yet it is not politics but love that tears the brothers apart: Shiva sleeps with Genet—the daughter of their housekeeper and the girl Marion has always loved. This second betrayal, now by the two people this sensitive young man loves most, sends Marion into a deep depression. And when Genet joins a radical political group fighting for the independence of Eritrea, Marion’s connection to her forces him into exile: he sneaks out of Ethiopia and makes his way to America.

Marion interns at a hospital in the Bronx, an underfunded, chaotic place where the patients are nearly as poor and desperate as those he had seen at Missing. It is here that Marion comes to maturity as a doctor and as a man. It is here, too, that he meets his father and takes his first steps toward reconciling with him. But when the past catches up to Marion—nearly destroying him—he must entrust his life to the two men he thought he trusted least in the world: the father who abandoned him and the brother who betrayed him. The surprising, stunning denouement both arises from and reenacts the major themes of Cutting for Stone: love and betrayal, forgiveness and self-sacrifice, and the inextricable union of life and death.

In Cutting for Stone, renowned physician Abraham Verghese has given us a remarkable reading experience that explores the lives of a memorable cast of characters, many of them doctors; the insight the novel offers into the world of medicine, along with its wealth of precise detail about how doctors work, is unparalleled in American fiction. Verghese is so attuned to the movements of the heart and of the mind, so adept at dramatizing the great themes of human existence, and he has filled this world with such richly drawn, fascinating characters, that Cutting for Stone becomes one of those rare books one wishes would never end, an alternate reality that both rivals and illuminates the real world readers must return to when the book is closed.

2. What does Cutting for Stone reveal about the emotional lives of doctors? Contrast the attitudes of Hema, Ghosh, Marion, Shiva, and Thomas Stone toward their work. What draws each of them to the practice of medicine? How are they affected, emotionally and otherwise, by the work they do?

3. Marion observes that in Ethiopia, patients assume that all illnesses are fatal and that death is expected, but in America, news of having a fatal illness “always seemed to come as a surprise, as if we took it for granted that we were immortal” [p. 486]. What other important differences does Cutting for Stone reveal about the way illness is viewed and treated in Ethiopia and in the United States? To what extent are these differences reflected in the split between poor hospitals, like the one in the Bronx where Marion works, and rich hospitals like the one in Boston where his father works?

4. In the novel, Thomas Stone asks, “What treatment in an emergency is administered by ear?” The correct answer is “Words of comfort.” How does this moment encapsulate the book’s surprising take on medicine? Have your experiences with doctors and hospitals held this to be true? Why or why not? What doesCutting for Stone tell us about the roles of compassion, faith, and hope in medicine?

5. There are a number of dramatic scenes on operating tables in Cutting for Stone: the twins’ births, Thomas Stone amputating his own finger, Ghosh untwisting Colonel Mebratu’s volvulus, the liver transplant, etc. How does Verghese use medical detail to create tension and surprise? What do his depictions of dramatic surgeries share with film and television hospital dramas—and yet how are they different?

6. Marion suffers a series of painful betrayals—by his father, by Shiva, and by Genet. To what degree is he able, by the end of the novel, to forgive them?

7. To what extent does the story of Thomas Stone’s childhood soften Marion’s judgment of him? How does Thomas’s suffering as a child, the illness of his parents, and his own illness help to explain why he abandons Shiva and Marion at their birth? How should Thomas finally be judged?

8. In what important ways does Marion come to resemble his father, although he grows up without him? How does Marion grow and change over the course of the novel?

9. A passionate, unique love affair sets Cutting for Stone in motion, and yet this romance remains a mystery—even to the key players—until the very conclusion of the novel. How does the relationship between Sister Mary Joseph Praise and Thomas Stone affect the lives of Shiva and Marion, Hema and Ghosh, Matron and everyone else at Missing? What do you think Verghese is trying to say about the nature of love and loss?

10. What do Hema, Matron, Rosina, Sister Mary Joseph Praise, Genet, and Tsige—as well as the many women who come to Missing seeking medical treatment—reveal about what life is like for women in Ethiopia?

11. Addis Ababa is at once a cosmopolitan city thrumming with life and the center of a dictatorship rife with conflict. How do the influences of Ethiopia’s various rulers—England, Italy, Emperor Selassie—reveal themselves in day-to-day life? How does growing up there affect Marion’s and Shiva’s worldviews?

12. As Ghosh nears death, Marion comments that the man who raised him had no worries or regrets, that “there was no restitution he needed to make, no moment he failed to seize” [p. 424]. What is the key to Ghosh’s contentment? What makes him such a good father, doctor, and teacher? What wisdom does he impart to Marion?

13. Although it’s also a play on the surname of the characters, the title Cutting for Stone comes from a line in the Hippocratic Oath: “I will not cut for stone, even for patients in whom the disease is manifest; I will leave this operation to be performed by practitioners, specialists in this art.” Verghese has said that this line comes from ancient times, when bladder stones were epidemic and painful: “There were itinerant stone cutters—lithologists—who could cut into either the bladder or the perineum and get the stone out, but because they cleaned the knife by wiping their blood-stiffened surgical aprons, patients usually died of infection the next day.” How does this line resonate for the doctors in the novel?

14. Almost all of the characters in Cutting for Stone are living in some sort of exile, self-imposed or forced, from their home country—Hema and Ghosh from India, Marion from Ethiopia, Thomas from India and then Ethiopia. Verghese is of Indian descent but was born and raised in Ethiopia, went to medical school in India, and has lived and worked in the United States for many years. What do you think this novel says about exile and the immigrant experience? How does exile change these characters, and what do they find themselves missing the most about home?

Abraham Verghese is Professor and Senior Associate Chair for the Theory and Practice of Medicine at the Stanford University School of Medicine. He was the founding director of the Center for Medical Humanities & Ethics at the University of Texas Health Science Center, San Antonio, where he is now an adjunct professor. He is the author of My Own Country, a 1994 NBCC Finalist and a Time Best Book of the Year, and The Tennis Partner, a New York Times Notable Book. A graduate of the Iowa Writers’ Workshop, he has published essays and short stories that have appeared in The New Yorker, The New York Times, The Atlantic Monthly, Esquire, Granta, The Wall Street Journal, and elsewhere. He lives in Palo Alto, California.

The Stars Are Fire

Snow Flower and the Secret Fan
Back to Top