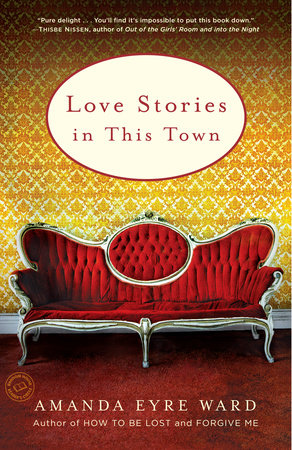 1. Though the book’s title may seem romantic, it actually comes from a moment of extreme cynicism–a bartender telling Lola after her ex-boyfriend’s wedding that “There are no love stories in this town.” Why do you think Ward chose this as the title for the collection? Did reading these stories make you see love stories in a different light?

2. If you have read Ward’s novels, did you find the tone or perspective of any of these stories familiar? How would you describe Ward’s writing style? Her characters?

3. Fertility and pregnancy play a big role in a number of these stories. How do the women in these stories approach motherhood? Is it different from how their husbands seem to be approaching fatherhood? Do you see these issues representing larger themes about identity, change, or relationships?

4. The realities of living in a post-9/11 world come up in several stories–in the narrator’s obsession with Cipro in “Should I Be Scared,” in Lola’s anxiety about living in Saudi Arabia in “Motherhood and Terrorism,” and in Casey’s grief in “The Way the Sky Changed.” How much are these stories about a specific moment in history, and how much do they speak to broader emotional issues?

5. Ward’s stories take place in a variety of “towns”– in Texas, New York, Maine, Montana–and in San Fran cisco. How important is setting to the stories? What do you think they mean, in particular, to Lola, who lives in a number of quite different places?

6. Like Lola and Emmett, the narrator of “Should I Be Scared?” and her husband have different interests–his in science, hers in the humanities. How does the clash between science and imagination factor into each story? How do you think it shapes each of their relationships? 7. Lola Wilkerson is at the center of six of the collection’s twelve stories. Why do you think Ward devotes so much of her collection to this character? What similarities do you see between the Lola stories and the preceding stories? What is different about these stories?

7. Lola Wilkerson is at the center of six of the collection’s twelve stories. Why do you think Ward devotes so much of her collection to this character? What similarities do you see between the Lola stories and the preceding stories? What is different about these stories?

9. Nan and Sissy are very different characters–and mothers. How do you see their personalities and parenting styles affecting their children? Do you think Lola is more similar to Nan, or is she influenced by both of them?

10. From the ceramic consultant in “Should I Be Scared?” to Kimberly’s fashion design, from the Internet start-up in “Shakespeare.com” to Lola’s dramatic career shift, work is a feature of many of these stories. How would you describe the role work plays in the female characters’ lives? Is it different for the men?

11. From snappy comebacks to a strong sense of the absurd, humor appears in many of Ward’s stories. How would you describe the way humor fits into her sensibility as a writer? What were some of your favorite funny lines or moments?

12. Do you have a favorite story in the collection? Which story did you find the saddest? The most surprising?

Learn More About Love Stories in This Town
print

The Day I Ate Whatever I Wanted

Mary and O’Neil
Back to Top