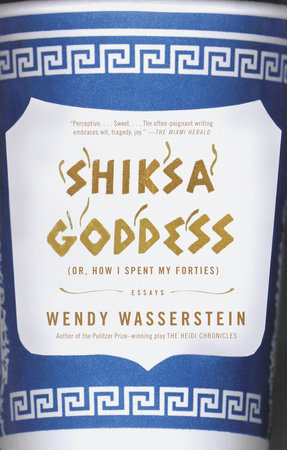 Based in part on a To Do list she composed when she turned forty, the essays in Shiksa Goddess range from the state of the arts to the state of the author’s eating habits, from a spoof on New York real estate agents to the fate of Polish Jews in the Holocaust, and from the death of a sister to the birth of a daughter. Throughout, Wendy Wasserstein brings her distinctive blend of self-deprecating humor, keen observation, satirical wit, and a profound grasp of the pathos and comedy that underlie human existence. As she writes in the preface, describing the anxiety over the birth of her premature daughter, “I realized that my day-to-day way of getting through it was partially due to the eye I developed as a comic essayist. I was able to survey the situation for every ridiculous anecdote while maintaining a nonsentimental center for what is truly important” [p. x]. In fact, that statement might serve as a description for the way she approaches all of her subjects–with a readiness to see the comic side of any experience and a sure sense of what’s significant. Whether she’s writing about her mother’s quirky advice, Chekhov’s plays, the need for American theater to cultivate new audiences, or the career of cookie maven Martha Entenmann, Wasserstein finds what is seriously funny in whatever she brings into her lens.

For fans of Wendy Wasserstein’s plays, and for anyone who enjoys the art of the essay, Shiksa Goddess provides a fascinating glimpse into the author’s way of thinking about herself, her friends and family, her forties, and her lifelong love affair with the theater.

1. Wasserstein says in the preface that most of these essays were written in response to a To Do list she’d composed when she turned forty: “lose weight, exercise, read more, improve female friendships, improve male friendships, become a better citizen . . . move, fall in love, and the enormous ‘decide about baby’” (p. ix). In what ways do these goals reflect a midlife frame of mind? How well does Wasserstein succeed in accomplishing these goals? What examples of humor and self-irony does she find in her attempts complete her list?

2. The title of this book is Shiksa Goddess, and in the opening essay Wasserstein indirectly pokes fun at gentiles like Madeline Albright and Hillary Rodham Clinton–both of whom publicly announced that they had Jewish ancestors–by revealing her own “Episcopalian” roots. In what ways does Wasserstein bring a distinctly Jewish perspective to her view of herself and the world around her?

3. What conclusions does Wasserstein draw from her experiment of taking eight high school students to see a variety of Broadway plays? How do the students respond to the plays? What do their responses suggest about both the strength of American theater and the problems it has in reaching a larger, more inclusive audience?

4. Wasserstein is a passionate advocate of funding the arts. In the essay “The State of the Arts,” she writes, “For every congressman who would say that the arts are elitist, I would answer that museums, plays, and dance are not responsible for violence in elementary schools or the tragedy at Columbine High or the hopelessness felt by many adolescents” [p. 153]. Is this an effective argument? What other reasons does she give for why the government should support the arts? What does she feel is the ultimate value of the arts for the individual and for the nation? What direction does she think future funding for the arts should take?

5. Why is Wasserstein so disappointed with Hillary Clinton? Are her criticisms just? How does her view of Hillary Clinton fit with the other statements she makes about women throughout the book?

6. Much of the charm of Wasserstein’s essays comes from the persona she presents. In “Making Nice: When Is Enough Enough?” she writes, “Whatever nice means, I’ve been it all my life” [p.143]. How is this quality revealed in her writing? What other characteristics or personality traits of Wendy Wasserstein are on display in Shiksa Goddess? How seriously does she take herself?

7. When Wasserstein visits her mother’s Poland she is reminded of the terrible fate of Polish Jews in World War II. How does her own Jewish perspective help her understand what is happening in present-day Bosnia and Herzegovina? In what ways does the ethnic cleansing in the Balkans parallel the Holocaust? Why does she feel it is so important to keep telling the stories of oppression and genocide?

8. Many of the essays in Shiksa Goddess are imbued with a deep admiration for the important people in Wasserstein’s life, from her sister and her mother to the 101-year-old director George Abbott and the Russian playwright Anton Chekhov. What does Wasserstein admire about Chekhov’s plays and Abbott’s direction? How have these two figures influenced her work?

9. In “Waif Goodbye, Hello Bulge” and “New York Theater: Isn’t It Romantic,” Wasserstein challenges prevailing views about the attractiveness of women’s bodies and the vitality of contemporary theater, suggesting that super-thin supermodels are now trying to gain weight in order to be fashionable and that actors are now spurning Hollywood movies for the New York stage. What point is she making in these satirical essays? Why is this a more effective way of revealing society’s foolishness than a more straightforward criticism would be?

10. In “Three Sisters,” after Wasserstein has just watched her play The Sisters Rosensweig, she thinks to herself that “this author must be very mature. She must believe in family and personal history. She must believe in the challenge and tradition of well-structured plays. . . . She must believe there are possibilities. Obviously, then, the author could not possibly be me” [p. 67]. Why would Wasserstein view herself in this way? Where else in Shiksa Goddess does this self-deprecating humor occur? In what ways do these essays in fact demonstrate a strong belief in family and personal history?

11. Wasserstein observes, “Chekhov got to do it all. He was funny, he was sad. He was moving, he was satirical” [p. 183]. Where does this mixture of humor, satire, sadness, and poignancy appear in Wasserstein’s own writing? How does humor help her to deal with her sister’s illness and death, and with all the painful, nerve-wracking uncertainties surrounding her daughter’s birth?

12. In “Jill’s Adventures in Real Estate,” a one-act about an aspiring writer searching for affordable housing in Manhattan, the interior designer Bario Baronial complains, “The thing about these Park Avenue apartments is they’re all really too small. That’s why the Carnegies, the Vanderbilts, and the Warburgs all built houses. The problem is they’re all museums now, and it’s very hard to get Landmarks Preservation to permit you to turn a museum into a private home” [p. 109]. What is Wasserstein suggesting here about the relationship between art and money, or between artists and real estate agents, in New York? What makes her satire of the way artists are treated in New York so biting and so effective?

13. In discussing her sister’s career, Wasserstein writes, “My sister would say that life takes its toll, male or female, period. I heartily disagree. I can’t help but wonder what difference it would have made in my sister’s personal or corporate life if she had been a man. Of course, Sandra would say that if you’re a player, gender shouldn’t be an issue. But for my generation, gender is the issue” [p. 82]. Based on these essays and on her plays, how does Wasserstein view the unique problems and possibilities women face in contemporary America?

14. Wasserstein often mentions or quotes her mother, Lola, in these essays. What kind of woman is she? How has she influenced Wasserstein’s life?

15. While many of the essays in Shiksa Goddess are quick and lighthearted, the final two, “How I Spent My Forties” and “Days of Awe: The Birth of Lucy Jane” are longer and deal with the much weightier subjects of her sister’s terminal illness and the turmoil of her daughter’s premature birth. Why would Wasserstein choose to end her book with these essays? What makes them so powerful and moving? In what ways does Wasserstein’s skill as a playwright allow her to convey all the tension and drama of these real-life events?

Wendy Wasserstein was born in Brooklyn and raised in Manhattan. She received a B. A. from Mount Holyoke College and an M.F.A. from the Yale School of Drama. She is the author of such plays as Uncommon Women and Others, Isn’t It Romantic, The Sisters Rosensweig, An American Daughter, and The Heidi Chronicles, for which she received a Tony Award and the Pulitzer Prize. Ms. Wasserstein has also been the recipient of the New York Drama Critics Circle Award, the Drama Desk Award, and the Outer Critics Circle Award. Wendy Wasserstein lives in New York City with her daughter, Lucy Jane.

Sandy Asher, ed., With All My Heart, With All My Mind: Thirteen Stories About Growing Up Jewish; Ingmar Bergman, A Life in the Theater; Anton Chekhov, Three Sisters and The Cherry Orchard; Linda N. Edelstein, The Art of Midlife: Courage and Creative Living for Women; Elizabeth Ehrlich, Miriam’s Kitchen: A Memoir; Nomi Eve, The Family Orchard; Stephanie Marston, If Not Now, When? Reclaiming Ourselves at Midlife; Cathleen Rountree, On Women Turning Forty: Coming into Our Fullness; Wendy Wasserstein, The Heidi Chronicles.
Learn More About Shiksa Goddess
print

Dog Is My Co-Pilot

A Field Guide to Awkward Silences

You Are Your Child’s First Teacher, Third Edition

Where’s Karl?
Back to Top