The Brief History of the Dead Reader’s Guide 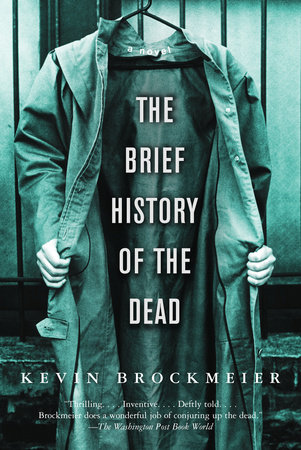 The Brief History of the Dead Reader’s Guide

print
The Brief History of the Dead Reader’s Guide

The introduction, discussion questions, and suggestions for further reading that follow are designed to enhance your group’s discussion of Kevin Brockmeier’s brilliantly imagined apocalyptic novel The Brief History of the Dead.

Kevin Brockmeier’s ambitious new novel takes readers deep into the Antarctic wilderness, to a future where the human race is devastated by a deadly virus and to a city of the dead— whose denizens will exist there only as long as they are remembered by the living.

The main story lines of The Brief History of the Dead proceed on parallel tracks in this world and the afterlife. While a deadly virus, unleashed by terrorists, is killing millions, Laura Byrd struggles to save her own life in the frozen tundra of the Antarctic, where she has been sent on a research mission for the Coca-Cola Corporation. As more people are killed by the plague, more of the dead disappear from the city, because no one is left to remember them. Soon only Laura remains, alone in a frozen world, cut off from all contact with other humans, clinging precariously to life and desperately searching for signs of others. In the afterlife, everyone she has ever known–her parents, Marion and Phillip, Luka Sims, a professor with whom she had an affair, a blind man, a religious zealot, her friends, coworkers, and acquaintances–depend on her survival for their own. It is not heaven where they live (“What kind of heaven had the blasting sound of garbage trucks in the morning, and chewing gum on the pavement, and the smell of fish rotting by the river?”), but a city that mirrors earthly cities, where people sell flowers, eat at diners, print newspapers, argue, fall in love, and consider the whys and wherefores of their predicament much as they did when alive. But as the novel’s parallel stories begin to intersect and Laura loses her grip on life, the city’s residents are hurtled toward a conclusion that is disturbingly provocative.

Exploring the intricacies of memory and the subtle threads that connect the living and the dead, The Brief History of the Dead engages some of the deepest human fears and imaginings, forcing readers to consider both the world that we are creating and the one that awaits us.

1. What makes the premise of The Brief History of the Dead–that the recently dead inhabit a necropolis very much like an earthly city but only as long as they are remembered by the living–so engaging? What basic human feelings does this idea draw upon?

2. What is the significance of the heartbeat that everyone hears during the passage into death? What happens when it can no longer be heard?

3. In what ways is the city of the dead reassuringly like our own cities? How do people feel about being there?

4. How likely is the future that Brockmeier paints in the novel–melting polar icecaps, the mass extinction of animals, a plague deliberately spread by terrorists? What aspects of our current situation point to such a possibility?

5. During Lindell Trimble’s Employee of the Year award acceptance speech, he insists that Coca-Cola must not rest on its laurels but keep its momentum going. “A body is more likely to die at sunset than at any other hour of the day–that’s a fact,” he says. “The trick, then, is to keep the sun from setting. That’s what we’re looking for at Coca-Cola, and what we in the PR division have been fighting so hard to achieve: a sun that never sets. A perpetual noon” [p. 125]. What is wrong with this kind of thinking? What are the consequences of such a philosophy of unbounded hubris and the refusal to accept natural limitation?

6. The dead are surprised by their memories. “They might go weeks and months without thinking of the houses and neighborhoods they had grown up in, their triumphs of shame and glory, the jobs, routines, and hobbies that had slowly eaten away their lives, yet the smallest, most inconsequential episode would leap into their thoughts a hundred times a day, like a fish smacking its tail on the surface of a lake” [p. 11]. Does this seem an accurate description of how memory often works? Why would the dead forget the important things and remember the trivial ones?

7. What does The Brief History of the Dead reveal about the subtle ways a single, ordinary human life is interconnected with thousands of others? Does Puckett’s claim that he can remember between fifty and seventy thousand people seem exaggerated or plausible?

8. Explore the connections between the novel’s main plotlines–Laura’s struggle to stay alive in the Antarctic and the existential predicament of the recently dead. In what ways, obvious and subtle, do these stories connect?

9. Why has Kevin Brockmeier chosen Coca-Cola as the medium that carries the deadly virus? What larger cultural, social, political point is he making through this choice? In what ways do current instances of corporate disregard for public health prefigure such an event?

10. What is the next stage of death, “that distant world where broken souls are wrenched out of their histories”? [p. 252]. Is Brockmeier pointing toward heaven or some other kind of afterlife? What will happen to these souls?

11. What are the ironies of Luka Sims running a daily newspaper for the dead and Coleman Kinzler warning the dead about the Second Coming of Christ? What other appealing peculiarities does A Brief History of the Dead provide?

12. In what ways is A Brief History of the Dead both realistic and fantastic? How does Brockmeier balance naturalistic elements from the world as we know it with an imagined future of the human race and a visionary depiction of the first stage of the afterlife?

Kevin Brockmeier is the author of The Truth About Celia and a children’s book, City of Names. He has published stories in The Georgia Review, The Carolina Quarterly, and McSweeney’s, and his story “Space” from Things That Fall from the Sky has been selected for The Best American Short Stories. He has received the Chicago Tribune’s Nelson Algren Award, an Italo Calvino Short Fiction Award, a James Michener-Paul Engle Fellowship, two O. Henry Awards (one, a first prize), and most recently, a NEA grant. He lives in Little Rock, Arkansas.

Andrew’s Brain
Back to Top