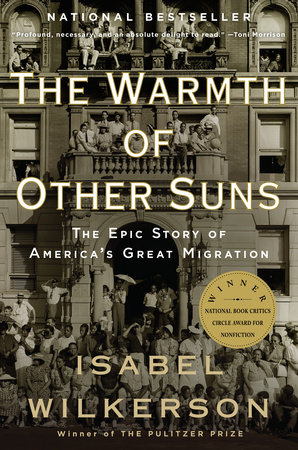 print
The Warmth of Other Suns Reader’s Guide

In The Warmth of Other Suns, Isabel Wilkerson draws on ten years of research and over 1,500 interviews to tell the remarkable story of America’s Great Migration—the mass exodus of Southern blacks to Northern cities from 1915 to 1970. It is a story whose real significance has until now been largely overlooked and poorly understood.

Unlike most migrations, the blacks who left the South were seeking full citizenship within their own country, rather than traveling to an entirely new land. The racial terror that reigned in the Jim Crow South—the daily humiliations, constant fear of violence, and the yearning to live a full and free life—drove them to make a perilous journey, risking their lives and livelihoods in the process. The dramatic nature of this migration, the dangers and sacrifice involved, and the consequences for those who made the journey—for both the North and South and American culture more generally—has never been told with this level of insight and detail.

Ida Mae Gladney left the backbreaking work of sharecropping for a quiet life in Chicago where she found contentment and helped vote Barack Obama into the state senate. George Swanson Starling escaped the orange groves of Florida and landed in Harlem, working as a porter on trains up and down the eastern seaboard. Robert Pershing Foster left Louisiana to study medicine and became a wealthy and much beloved doctor in Los Angeles, who was personal physician to Ray Charles. Despite their different circumstances and destinations, all were united by shared suffering under the illogic and cruelty of Jim Crow and by a compelling desire for freedom.

By focusing on individuals as well as census figures, archives, and other historical documents, Wilkerson captures with unprecedented vividness the lived experience of the Great Migration. Wilkerson lets readers feel the very texture of life under Jim Crow law—the constant fear and daily humiliations, both small and large: Robert Pershing Foster having to drive through three states before finding a hotel that will accept him; Ida Mae Gladney having to pick a hundred pounds of cotton a day, which was like “picking a hundred pounds of feathers,” and then getting cheated out of a fair wage; George Swanson Starling standing up to the orange grove owners and having to flee a lynch mob for doing so. The intimate portraits of The Warmth of Other Suns bring the book to life and convey the true depth of hardship and suffering of all who were swept up in the Great Migration had to endure.

The Great Migration is, finally, a testament to the courage, resilience, and dignity of the people who risked everything to gain some measure of the freedoms promised them in the Declaration of Independence and the Emancipation Proclamation—even as they faced new difficulties in the North. The book sheds new light on one of the most important demographic upheavals in American history and shows just how dramatically American culture has been changed, and continues to be changed, because of it.

1. The Warmth of Other Suns combines a sweeping historical perspective with vivid intimate portraits of three individuals: Ida Mae Gladney, George Swanson Starling, and Robert Pershing Foster. What is the value of this dual focus, of shifting between the panoramic and the close-up? In what ways are Ida Mae Gladney, George Starling, and Robert Foster representative of the millions of other migrants who journeyed from South to North?

2. In many ways The Warmth of Other Suns seeks to tell a new story—about the Great Migration of southern blacks to the north—and to set the record straight about the true significance of that migration. What are the most surprising revelations in the book? What misconceptions does Wilkerson dispel?

3. What were the major economic, social, and historical forces that sparked the Great Migration? Why did blacks leave in such great numbers from 1915 to 1970?

4. What were the most horrifying conditions of Jim Crow South? What instances of racial terrorism stand out most strongly in the book? What daily injustices and humiliations did blacks have to face there?

5. In what ways was the Great Migration of southern blacks similar to other historical migrations? In what important ways was it unique?

6. After being viciously attacked by a mob in Cicero, a suburb of Chicago, Martin Luther King, Jr. said: “I have seen many demonstrations in the South, but I have never seen anything so hostile and so hateful as I’ve seen here today” (p. 389). Why were northern working-class whites so hostile to black migrants?

7. Wilkerson quotes Black Boy in which Richard Wright wrote, on arriving in the North: “I had fled one insecurity and embraced another” (p. 242). What unique challenges did black migrants face in the North? How did these challenges affect the lives of Ida Mae Gladney, George Starling, and Robert Foster?

9. What motivated Ida Mae Gladney, George Starling, and Robert Foster to leave the South? What circumstances and inner drives prompted them to undertake such a difficult and dangerous journey? What would likely have been their fates if they had remained in the South? In what ways did living in the North free them?

10. Near the end of the book, Wilkerson asks: “With all that grew out of the mass movement of people, did the Great Migration achieve the aim of those who willed it? Were the people who left the South—and their families—better off for having done so? Was the loss of what they left behind worth what confronted them in the anonymous cities they fled to?” (p. 528). How does Wilkerson answer these questions?

11. How did the Great Migration change not only the North but also the South? How did the South respond to the mass exodus of cheap black labor?

13. At a neighborhood watch meeting in Chicago’s South Shore, Ida Mae listens to a young state senator named Barack Obama. In what ways is Obama’s presidency a indirect result of the Great Migration?

14. What is the value of Wilkerson basing her research primarily on firsthand, eyewitness accounts, gathered through extensive interviews, of this historical period?

15. Wilkerson writes of her three subjects that “Ida Mae Gladney had the humblest trappings but was perhaps the richest of them all. She had lived the hardest life, been given the least education, seen the worst the South could hurl at her people, and did not let it break her . . . . Her success was spiritual, perhaps the hardest of all to achieve. And because of that, she was the happiest and lived the longest of them all” (p. 532). What attributes allowed Ida Mae Gladney to achieve this happiness and longevity? In what sense might her life, and the lives of George Starling and Robert Foster as well, serve as models for how to persevere and overcome tremendous difficulties?

Isabel Wilkerson won the 1994 Pulitzer Prize for Feature Writing as Chicago bureau chief of The New York Times. The first black woman to win a Pulitzer Prize in journalism and the first African American to win for individual reporting, she has also won the George Polk Award and a John Simon Guggenheim Fellowship. She has lectured on narrative at the Nieman Foundation at Harvard University and has served as Ferris Professor of Journalism at Princeton University and as the James M. Cox Jr. Professor of Journalism at Emory University. She is currently Professor of Journalism and Director of Narrative Nonfiction at Boston University. During the Great Migration, her parents journeyed from Georgia and southern Virginia to Washington, D.C., where she was born and reared. This is her first book.

In the Heart of the Sea

How to Be an Antiracist

Mayflower
Back to Top