The Future of Life Reader’s Guide 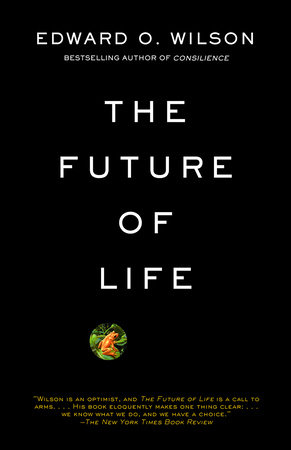 The Future of Life Reader’s Guide

“An elegant manifesto. . . . A nuanced and evocative explanation of just why biodiversity matters.” –The New Yorker

The questions, discussion topics, and author biography that follow are intended to enhance your group’s reading of Edward O. Wilson’s The Future of Life, an impassioned call for the protection of the earth’s biodiversity by one of our greatest living scientists.

Our world is far richer than previously conceived, yet so ravaged by human activity that half its species could be gone by the end of the present century. These two contrasting truths–unexpected magnificence and underestimated peril–have become compellingly clear during the past two decades of research on biological diversity.

In this timely and important new book, Wilson describes exactly what treasures of the natural world we are about to lose forever and what we can do right now to save them. Destruction of natural habitats, the rampant spread of invasive species, pollution, uncontrolled population growth, and over-harvesting are the main threats to our natural world. Wilson explains how each of these elements works to undo the web of life that supports us, and why it is in our best interest to stop it. In the process, he explores the ethical and religious base of the conservation movement and deflates the myth that environmental policy is antithetical to economic growth by illustrating how new methods of conservation can ensure long-term economic well-being.

1. In his prologue, Wilson addresses Henry David Thoreau, the nineteenth-century naturalist: “I came because of all your contemporaries you are the one I most need to understand” [pp. xi-xii]. If you have read Thoreau’s Walden, what do you think Thoreau would make of the present state of the earth as described in Wilson’s The Future of Life? Why is it important to Wilson to make personal connections between himself and Darwin, Huxley, and Thoreau [see p. xii]? Why does Wilson begin his book with this homage to Thoreau? What specifically about Thoreau’s approach to life does Wilson wish people would begin to emulate?

2. Many organisms and ecosystems unfamiliar to nonscientists are described in these pages, particularly chapter 1, “To the Ends of Earth.” What is the effect of reading about extremophiles, radiation-resistant bacteria, the deeps of the Mariana Trench, the environment of the McMurdo Dry Valleys, and the bacteria and fungi of Antarctica’s Lake Vostok? Why is it necessary for people to familiarize themselves with the complexity of the Earth’s organisms and its enormous variety of ecosystems? [See pp. 3-6, 9.]

3. What is the problem, as Wilson sees it, with the economic approach to environmental policy? What is lost if everything is translated into monetary value? What would be accomplished if governments adopted the GPI (genuine progress indicator) instead of the GNP (gross national product), which Wilson discusses on page 28? What is indicated, in terms of the American approach to environmental responsibility, by the fact that the United States refuses for economic reasons to adopt the Kyoto Climate Protocol to reduce greenhouse gases?

4. What is most troubling about the discovery that many frog and toad species are rapidly becoming extinct or are undergoing mutations and physical malformations? Why are amphibians such good indicators of environmental stresses? Is all of the damage to amphibian habitats ultimately due to human activity? [See pp. 54-56.]

5. In his projection of life on Earth in the year 2100, Wilson suggests that human beings will have become more and more homogenized, genetically speaking, through intermarriage, and that the biological differences between races will grow fainter with each generation [pp. 76-77]. What might be the social advantages of greater racial homogeneity? Might the breakdown of racial difference promote greater harmony among peoples, or are issues of genetics not the most provocative sources of ethnic and class conflict? What are the biological disadvantages of the loss of geographically based diversity in the human gene pool?

6. Is Wilson correct in assuming that the people of 2100 will be “aging and wiser” about the damage the human population has done to the Earth and to the future [p. 77]? What is the tone of the “testament” to our heirs that Wilson includes on pages 77 and 78? Is this a warning that in the future certain missing aspects of the natural world will have to be fabricated or synthesized in order to re-create what was destroyed? What does Wilson mean when he calls the heritage of the twenty-first century “the Age of Loneliness” for humanity?

7. What are the dangers and possible benefits of genetically engineered food crops? Why are people in the United States far less resistant to this idea than people in Europe, where environmental activism is more widespread? What is Wilson’s position regarding genetic engineering [see pp. 116-120]?

8. Wilson points out that most of the planet’s “hotspots”—places in which the environment is most severely threatened—are in the developing world, where populations are often extremely poor. Rich nations are more likely than poor ones to take active steps to preserve their environment. Of the conservationist strategies and political initiatives he discusses, which seem most likely to succeed in poor nations? How important is the role played by nongovernmental organizations (NGOs) in conservation [see chapter 7]?

9. The most important concern of Wilson and other environmentalists is what he calls “the wreckage of the planet by an exuberantly plentiful and ingenious humanity” [xxiii]; elsewhere he calls Homo sapiens the “serial killer of the biosphere” [p. 94]. But he suggests that humanity may be ready to begin to be more thoughtful about its impact on the Earth. On page 22 he asks, “How best can we shift to a culture of permanence, both for ourselves and for the biosphere that sustains us?” What are some of the ways that this might happen? What are some of the major forces of resistance to such a change?

10. In the developed world, where the majority of people live in urban and suburban environments, a sense of alienation from wild nature is quite common. Given that this is the case, how difficult is it for people to feel alarmed about the perilous state of the Earth and its disappearing species, encroaching oceans, and melting ice caps? What sort of leap of the imagination do people have to make to become committed environmentalists? Do most people in America think about how their consumer behaviors, for instance, affect people, animals, and nature in biologically threatened areas of the developing world?

11. In his prologue Wilson writes, “The race is now on between the technoscientific forces that are destroying the living environment and those that can be harnessed to save it. . . . If the race is won, humanity can emerge in far better condition than when it entered, and with most of the diversity of life still intact” [p. xxiii]. How does Wilson reach the mood of cautious optimism in his final chapter? Among his specific suggestions for “the solution” [chapter 7] to the impending environmental catastrophe, which seem most likely to succeed? Which solutions will be most difficult to implement, and why? Is Wilson, as he says, “an extremist” in suggesting that 50 percent of the world’s land surface should be protected from overpopulation and development?

12. Biophilia is the title of one of Wilson’s previous books; he defines the word as “the innate tendency to affiliate with, and draw deep satisfaction from, other organisms.” He has also said, “There’s no doubt anymore, from psychological tests, that people do prefer a natural environment in which to live. . . . Clearly this is something very deep and very mysterious in the human psyche, and very important for human welfare.” * What is the relationship, as Wilson sees it, between human spirituality and the natural world? Why should the human spiritual impulse play a central role in environmental thinking and policy-making?

* Both quotes from “Living in Shimmering Equilibrium,” an interview with E. O. Wilson by Fred Branfman on Salon.com.

Edward O. Wilson was born in Birmingham, Alabama, in 1929. He received a Ph.D. in biology from Harvard, where he has since taught, and where he has been the recipient of both of its college-wide teaching awards. He is the author of two Pulitzer Prize-winning books, On Human Nature (1978), and The Ants (1990, with Bert Holldobler), as well as other groundbreaking works, including Naturalist and Sociobiology. A recipient of many of the world’s leading prizes in science and conservation, he is currently Pellegrino University Research Professor and Honorary Curator in Entomology of the Museum of Comparative Zoology at Harvard University. He lives in Lexington, Massachusetts.
Learn More About The Future of Life
print

The Botany of Desire

The Songs of Trees
Back to Top