When the Soul Mends Reader’s Guide 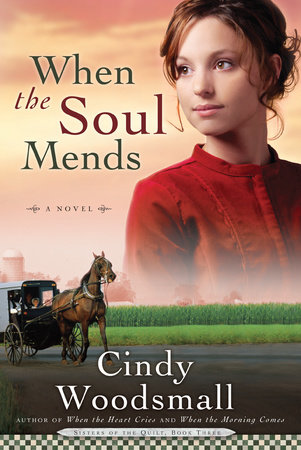 When the Soul Mends Reader’s Guide

After receiving a desperate and confusing call from her sister, Hannah Lapp reluctantly returns to the Old Order Amish community of her Pennsylvania childhood.

Having fled in disgrace more than two years earlier, she finally has settled into a satisfying role in the Englischer world. She also has found love and a new family with the wealthy Martin Palmer and the children she is helping him raise. But almost immediately after her arrival in Owl’s Perch, the disapproval of those who ostracized her, including her headstrong father, reopens old wounds.

As Hannah is thrown together with former fiancé Paul Waddell to work for her sister Sarah’s mental health, hidden truths surface about events during Hannah’s absence, and she faces an agonizing decision. Will she choose the Englischer world and the man who restored her hope, or will she heed the call to return to the Plain Life — and perhaps to her first love?

1. When the Soul Mends begins with Hannah returning to Owl’s Perch. In the When the Morning Comes, she almost died trying to avoid going back. Now her sister needs her. What does her willingness to return tell us about Hannah?

2. Once Hannah returned home, she realized that life had changed for everyone inside Owl’s Perch — an eerie and alienating feeling. Most of us have felt that way at times, whether looking back in amazement at the years that have come and gone, bonding with a new baby, or having to face a tragedy. Discuss what you do to handle your emotions during such times.

3. The first time Hannah saw Paul, she lashed out, saying hurtful things that only made her angrier and reopened hurt from deep within. Some people believe anger is an emotion we need to suppress or overcome. Others believe it’s a natural part of life that needs to be shared or released in a controlled, beneficial way. Do you think Hannah was wrong to share her negative emotions so openly?

4. Most of the characters in the novel series were Bible-believing people who wanted to honor God with their lives. Conflicting issues came in because they each understood God from a different perspective, based on their upbringing, personality, and life experiences. Most of us are pretty good at accepting the various beliefs of those around us but how would you feel if someone who believes differently than you do became your son- or daughter-in-law? That person will have a dramatic effect on your adult child, your future grandchildren, and every family gathering. Discuss how you think you’d respond to incorporating someone of different beliefs into your family. What are some steps you can take to embrace and enjoy the differences?

5. Martin and Paul are very different. From the time they were born, they were taught dissimilar world views through their parents, environments, and experiences. But both loved Hannah and did their best to walk in godly ways. Can you name a few things that you particularly liked about Martin? Paul?

6. Hannah’s mother regretted her actions toward her daughter, but healing did not begin until after she admitted her wrongs and allowed Hannah to voice her anger and hurt. Do you think it’s reasonable or right for someone to question and vent his or her anger at the person asking for forgiveness?

7. Although someone baptized into the Amish faith is required to marry a baptized member, the family doesn’t interfere with potential choices. Often they don’t even know who their loved one is seeing until they are engaged. If you’d known Matthew, would you have shared your concerns about Elle with him? Do you believe it’s right to express your opinion about who a friend or family member is dating?

8. In book one, Hannah buried her deceased baby before leaving Owl’s Perch. During the next two and a half years, Hannah’s father took care of the grave, offering a tenderness and respect he was never able to give to Hannah. He struggled with relationships and was difficult to deal with. What did you imagine is behind Zeb’s inner conflict? How do you relate with people who are caught inside themselves, reluctant to show love, constantly expressing negative thoughts, and pushing people away in the process?

9. Can you think of any ways Hannah could have made the relationship between her and her father less strained? She seemed to have insight and understanding of people that her father lacked. Did that make it her responsibility to find ways to make things work with Zeb Lapp?

10. Martin thought Hannah was perfect for him, the answer to all his years of waiting for the right person to share his life with. They had a history that bonded them, but they rarely valued or enjoyed the same things. Do you think the respect and attraction they had for each other and dedication for Kevin and Lissa are/were enough reasons for them to marry?

11. After facing and receiving help for her issues, Sarah decided she should remain single. Discuss how you feel about Sarah’s choice. Do you know anyone who has faced such challenges and picked a different path?

12. Although Paul and Hannah had strong feelings for each other, at one point they purposefully decided to walk away. Paul felt that way because he didn’t want to be the cause of Hannah destroying the life she’d built. Hannah didn’t want to hurt Martin, Kevin, or Lissa. Were these decisions as selfless as they’d hoped?

Learn More About When the Soul Mends
print

The Bridge of Peace

The Harvest of Grace

The Sound of Sleigh Bells

The Gift of Faith

Fraying at the Edge

Gathering the Threads
Back to Top