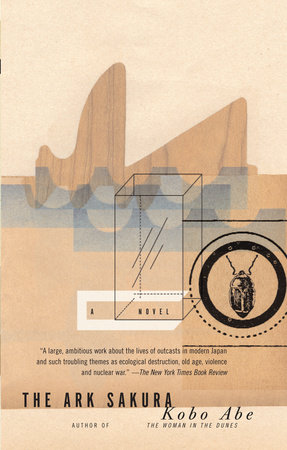 About The Ark Sakura

A classic from the renowned Japanese novelist about isolation and the threat of a nuclear holocaust, The Ark Sakura is as timely today as it was at its original publication.

In this Kafkaesque allegorical fantasy, Mole has converted a huge underground quarry into an “ark” capable of surviving the coming nuclear holocaust and is now in search of his crew. He falls victim, however, to the wiles of a con man-cum-insect dealer. In the surreal drama that ensues, the ark is invaded by a gang of youths and a sinister group of elderly people called the Broom Brigade, led by Mole’s odious father, while Mole becomes trapped in the ark’s central piece of equipment, a giant toilet powerful enough to flush almost anything, including chopped-up humans, out to sea.

Kobo Abe was born in Tokyo in 1924 and grew up in Mukden, Manchuria, during World War II. In 1948 he received a medical degree from Tokyo Imperial University, but he never practiced medicine. Considered one of Japan’s foremost novelists, his… More about Kobo Abe

“A large, ambitious work about the lives of outcasts in modern Japan and such troubling themes as ecological destruction, old age, violence and nuclear war.”
—The New York Times Book Review

“As is true of Poe and Kafka—two writers whose influence does seem apparent—Abe creates on the page an unexpected impulsion. One continues reading, on and on.”
—The New Yorker

“Abe’s depiction of the deadly game of survival is hilarious but at the same time leaves us with a chilling sense of apprehension about the brave new world that awaits us.”
—Los Angeles Times