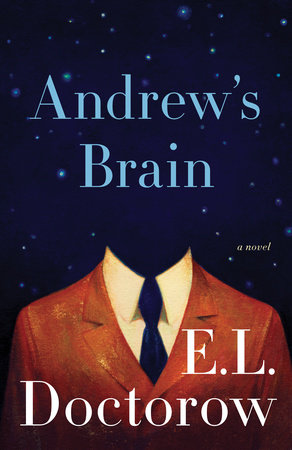 1. Near the beginning of the story, Andrew says that he is indirectly responsible for Briony’s death: “indirect—not directly causal” (page 20). How might he have reasoned that he was responsible for her death? Do you agree or disagree that Andrew ultimately had a hand in it? Why?

3. In speaking to “Doc,” Andrew says, “Your field is the mind, mine is the brain” (page 14). What do you understand to be the difference between the mind and the brain, within the context of this book? Would the meaning of the title have changed for you if the book had been called Andrew’s Mind instead of Andrew’s Brain?

4. Andrew says, “What else can we do as eaters of the fruit of knowledge but biologize ourselves” (page 7)? Does the quest to “biologize ourselves” contain pitfalls or dangers? How might it relate to the tension within the story between the biology of the brain and the more intangible aspects of the mind?

5. Andrew describes the Wasatch mountains as a “mountain bureaucracy,” town rulers that negotiated the light and colonized the townspeople (page 22). Why might Andrew have decided to describe the mountains in such specific and unusual terms? How might this connect with Andrew’s later experience with a different kind of bureaucracy in Washington, D.C.?

6. When Andrew connects Briony to the brain graph machine, he says, “I saw things more intimately Briony’s than if I had seen her undressed” (page 33). What does he mean by this? What are the implications of this “cephalic-invasive” voyeurism for Andrew and Briony’s relationship?

7. Mark Twain is a recurring motif in the book. Why do you think Andrew is so drawn to Twain? Think of when Andrew refers to the “imperial outrages annotated by MT in the last years of his life” (page 54). Twain lived through a different imperialistic era in America (the late 1800s and early 1900s), but how might this resonate with “imperial outrages” in Andrew’s own lifetime?

8. Andrew describes the possibility of humans yearning for a group brain, a larger social mind: “Perhaps we long for something like the situation these other creatures have—the ants, the bees—where the thinking is outsourced” (page 123). He mentions that this kind of thinking “brings us to politics.” What does he mean by this? How might this relate specifically to his encounters in the White House later in the book? What are other instances, in the book and in real life, when humans are drawn to this kind of “group brain” phenomenon?

9. Briony seems to transform Andrew. He speaks of how “watching her lifted me into a comparable state of happiness” (page 77). How do you think Briony manages to rescue Andrew from his “cold clear emotionless pond of silence” (page 77)? What is it about her that inspires such life in him?

10. Andrew also remarks about Briony that he finds “redemption” in “the loving attentions of this girl” (page 77). Then, at the very end of the book, he describes how Mark Twain found a different kind of redemption in the world, when his children “remember this tale and laugh with love for their father” (page 200). What is similar about their two kinds of redemption? What is different?

11. How does love transform Andrew? Is it a permanent transformation, or is it temporary? Andrew describes love as “the blunt concussion that renders us insensible to despair” (page 29). He also describes the happiness that stems from love as a feeling “possibly induced by endormorphin, the brain’s opiate” (page 104). Why do you think Andrew gravitates towards physical metaphors to describe the power of love?

12. By the end of the story, how much did you trust or believe in the literal truth of what Andrew was saying? Did your attitude toward his narrative reliability change at all over the course of the novel?

Things We Lost in the Fire

Lunar Park
Back to Top