I Am Nujood, Age 10 and Divorced Reader’s Guide 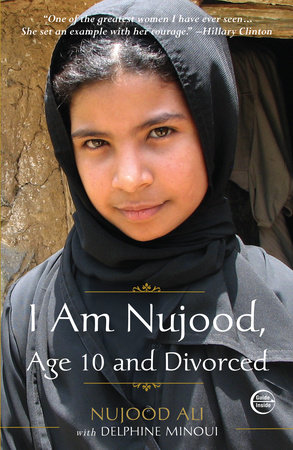 I Am Nujood, Age 10 and Divorced Reader’s Guide

print
I Am Nujood, Age 10 and Divorced Reader’s Guide

Forced by her father to marry a man three times her age, young Nujood Ali was sent away from her parents and beloved sisters and made to live with her husband and his family in an isolated village in rural Yemen. There she suffered daily from physical and emotional abuse by her mother-in-law and nightly at the rough hands of her spouse. Flouting his oath to wait to have sexual relations with Nujood until she was no longer a child, he took her virginity on their wedding night. She was only ten years old.

Unable to endure the pain and distress any longer, Nujood fled—not for home, but to the courthouse of the capital, paying for a taxi ride with a few precious coins of bread money. When a renowned Yemeni lawyer heard about the young victim, she took on Nujood’s case and fought the archaic system in a country where almost half the girls are married while still under the legal age. Since their unprecedented victory in April 2008, Nujood’s courageous defiance of both Yemeni customs and her own family has attracted a storm of international attention. Her story even incited change in Yemen and other Middle Eastern countries, where underage marriage laws are being increasingly enforced and other child brides have been granted divorces.

Recently honored alongside Hillary Clinton and Condoleezza Rice as one of Glamour magazine’s women of the year, Nujood now tells her full story for the first time. As she guides us from the magical, fragrant streets of the Old City of Sana’a to the cement-block slums and rural villages of this ancient land, her unflinching look at an injustice suffered by all too many girls around the world is at once shocking, inspiring, and utterly unforgettable.

1. Honor is obviously very important to the men of Nujood’s family. What does the notion of honor mean in rural Yemeni culture, and how does it differ from Western ideas of honor? When Nujood, Shada, and their allies go to court to seek a divorce for Nujood, what conception of honor are they defending?

2. Nujood mentions a tribal proverb that says “To guarantee a happy marriage, marry a nine-year-old girl.” How does this traditional view of a “happy marriage” differ from the Western view? Are there any ways in which they might be similar?

3. Nujood says that when her family was driven from Khardji, they lost “a small corner of paradise.” How do the injustices endured by Nujood’s father and brother, Fares, show that life in a patriarchal society can be hard not just for women, but for male Yemenis, too? Consider how the actions of Omma, Mona, Nujood’s mother- in- law, Dowla, and Shada reflect differences in their life experiences, personalities, backgrounds, and relationships with Nujood. For example:

4. What do you think Omma was thinking when Nujood told her about the abuse? Can you understand her lack of action?

5. Conversely, why was Dowla willing and able to give Nujood the help and advice that no one else was willing to provide?

6. Were you surprised when one of Nujood’s primary oppressors turned out to be a woman? Nujood’s mother-in-law is a strong personality who treats the young girl harshly and fails to come to her defense on her wedding night. How does this play, paradoxically, into the idea of Yemen as a highly patriarchal society? Do you see any similarity, for example, between the mother- in- law’s behavior and the fact that in some African societies, it is the women who enforce the practice of female circumcision?

7. How do you interpret the behavior of Mona, not only in her attempts to protect Nujood, but in her difficult relationship with her older sister, Jamila?

8. What enables Shada to take up Nujood’s cause so quickly and effectively? How does Shada, whom Nujood calls her “second mother,” open up Nujood’s world? Who else teaches Nujood about what a “real” family can be like?

9. The urban elites Nujood encounters in the courtroom and at the Yemen Times lead very different lives from those of Nujood and the country people of Yemen. How are these “enlightened” people actually disconnected from the rest of their society? For example, Nujood tells us several times that child marriage is common in Yemen, so why did the judges seem so shocked by Nujood’s tender age? Do you think they were unaware of their society’s problem with early marriage, or were they simply blind to the real-life consequences for girls like Nujood? Was there something special about Nujood that prompted the judges to help her, or was she simply the first girl who had come to them asking for a divorce?

10. Shada and Nujood chose the less “elitist” option for Nujood’s schooling. Do you think Nujood made the right decision—to stay in Yemen for her education? Do you think she will become a lawyer and help other girls like herself, as she says she hopes to do? Closer to home, Nujood talks about her protective feelings toward her sisters Mona and Haïfa, and even toward her big brother Fares. Do you think Nujood will be able to protect her siblings? What might stand in her way?

11. How has the international publicity surrounding the divorce affected Nujood’s family and community? Has it enlightened her relatives and neighbors? Or do you think it may have caused dissension within the family and alienated them from their own society?

12. Khat plays a small but sinister role in Nujood’s story. Khat is illegal in the United States, but some people in immigrant communities compare it to coffee and support its important traditional role in social situations. U.S. authorities counter that it is more like cocaine than coffee. After reading this book, what effect do you think khat has on its users and on Yemen in general? Do you feel that it contributed to Nujood’s father’s problems? If so, how? How do you think its use and effects might compare to social drugs in the United States? And most important, what does it tell us about any society that devotes so much of its valuable resources to tuning out from itself, so to speak?

NUJOOD ALI was the first child bride in Yemen to win a divorce. Named a Glamour Woman of the Year in 2008, she has been profiled in the New York Times, the Los Angeles Times, and Time magazine. She lives in Yemen.

DELPHINE MINOUI, a recipient of the Albert Loudres Prize, has been covering Iran and the Middle East since 1997. She lives in Beirut.
Learn More About I Am Nujood, Age 10 and Divorced
print

Reading Lolita in Tehran
Back to Top