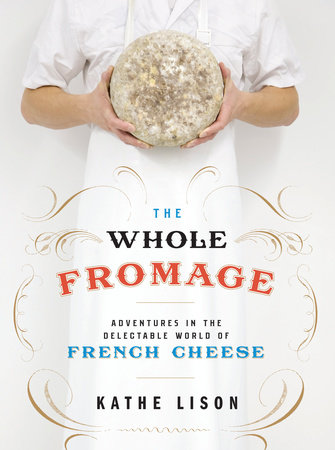 A tasting of cheeses from The Whole Fromage to enjoy with your reading group. This is additional content.

The basic advice for putting together a cheese plate is to have at least three different cheeses.  Generally, these include at least one chèvre (a goat cheese), one hard cheese, and one bleu.  It’s usually best to begin with the chèvre, move to the hard, and then finish with the bleu (you can vary that sequence, obviously, but beware of the bleu!  A bleu can be so powerful that it might crush the flavors of the other cheeses on the plate).  To spice up your menu, add some extras such as a “soft” or “stinky” fromage.  Though the list below is made up of the original French varieties, you may be able to find more locally produced versions depending upon where you live. Bon Fromage!

1. A lot of books have been written on the subject of French cheese, though none are quite like The Whole Fromage. In what ways do you think this book treats the subject differently than it has been approached in the past? What effect did this have on your reading experience?

3. Part of the history of French cheese is the battle between industrial and more artisan production. Lison suggests that industrial cheese doesn’t necessarily have to be all bad. What do you think of this idea? Should all cheese be artisan and locally produced? Or is there a place for factory-made cheese in a sustainable future?

4. Lison clearly did a tremendous amount of travel throughout France while researching the book. Were there any particular places or characters in the book that stood out for you? If you could be magically transported to one of the locales in the book, which one would it be?

5. Which of the cheeses discussed was your favorite? Why?

The Tablehopper’s Guide to Dining and Drinking in San Francisco

The Food of France

Sicilian Home Cooking
Back to Top