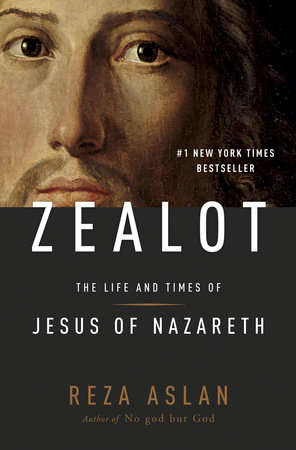 Zealot yields a fresh perspective on one of the greatest stories ever told even as it affirms the radical and transformative nature of Jesus of Nazareth’s life and mission.

In Zealot, Reza sifts through centuries of mythmaking and sheds new light on one of history’s most enigmatic characters by examining Jesus through the lens of the tumultuous era in which he lived: first-century Palestine, an age awash in apocalyptic fervor. Scores of Jewish prophets, preachers, and would-be messiahs wandered through the Holy land, bearing messages from God. This was the age of zealotry—a fervent nationalism that made resistance to the Roman occupation a religious duty.

This study guide will lead your group through the basics of an historical examination of Jesus of Nazareth that will open the minds of many . . . enjoy.

What others have said:

“This tough-minded, deeply political book does full justice to the real Jesus, and honors him in the process.” —San Francisco Chronicle

“Aslan is steeped in the history, languages and scriptural foundation of the
biblical scholar….Fascinatingly and convincingly drawn.” —The Seattle Times

If one knew nothing else about Jesus of Nazareth save that he was crucified by Rome, one would know practically all that was needed to uncover who he was, what he was, and why he ended up nailed to a cross. His offense, in the eyes of Rome, is self-evident. It was etched upon a plaque and placed above his head for all to see: Jesus of Nazareth, King of the Jews. His crime was daring to assume kingly ambitions.

Define the roles of the Jewish priestly hierarchy in Judea. How would a typical Galilean family like Jesus’ view this group?
How do the gospels portray the Temple priesthood?
How does Jesus view them?
What role do they play in the life and ministry of Jesus and his role as Messiah?

How did Jesus’ upbringing in Nazareth lead him to a deeper understanding of social justice?
Is the justice that Jesus preaches a political or religious reality?
What role does justice play in your life and must you embrace social justice to follow Jesus?
Dd the message of social justice shape the outcome of Christianity after the Resurrection?

What role did the Temple of Jerusalem play in the lives of the Jews on Jesus’ time?
Was it a political or religious center?
How much influence did the Romans have over the Temple?

With the above questions in mind, how do the words of the Gospels reflect Jesus’ relationship with both the Romans and the Jewish hierarchy and his call of social justice?
Was it the main thrust that formed Jesus’ ministry?
How should this sense of justice play itself in the life of modern day followers of Jesus?

After Jesus’ death, his followers formed two separate camps based on tow competing interpretations of his teaching. What are your thoughts on James and Paul?
Which camp do you follow?
Why did these two camps differ?
Why couldn’t they coexist or do they?

How did James’ and Paul’s differences from the Christian church we know today? Why do you think Paul’s interpretation flourished?
Where would the church be today if James’ outcome prevailed?
Would there still be a church and would it still call itself Christian?

This book is an attempt to reclaim, as much as possible, the Jesus of history, the Jesus before Christianity. There are those who consider such an endeavor to be a waste of time, believing the Jesus of history to be irrevocably los and incapable of recovery. Long gone are the heady days of “the quest for the historical Jesus,” when scholars confidently proclaimed that modern scientific tools and historical research would allow us to uncover Jesus’ true identity. The real Jesus no longer matters, these scholars argue. We should focus instead on the only Jesus that is accessible to us: Jesus the Christ.

Granted, writing a biography of Jesus of Nazareth is not like writing a biography of Napoleon Bonaparte. The task is somewhat akin to putting together a massive puzzle with only a few of the pieces in hand; one has no choice but to fill in therest of the puzzle based on the best, most educated guess of what the completed image should look like. The great Christian theologian Rudolf Bultmann liked to say that the quest for the historical Jesus is ultimately an internal quest. Scholars tend to see the Jesus they want to see. Too often they see themselves—their own reflection—in the image of Jesus the have constructed.

And yet that best, most educated guess may be enough to, at the very least, questions our most basic assumptions about Jesus of Nazareth. If we expose the claims of the gospels to the heat o historical analysis, we can purge the scriptures of their literary and theological flourishes and forge a far more accurate picture of the Jesus of history. Indeed, if we commit to placing Jesus firmly within the social, religious, and political context of the era in which he lived—an era marked by the slow burn of a revolt against Rome that would forever transform the faith and practice of Judaism—then, in some ways, his biography writes itself.

The Jesus that is uncovered in the process may not be the Jesus we expect. But in the end, he is the only Jesus that we can access by historical means.

Everything else is matter of faith.

Thomas Jefferson: The Art of Power

The Guns of August

All Quiet on the Western Front
Back to Top