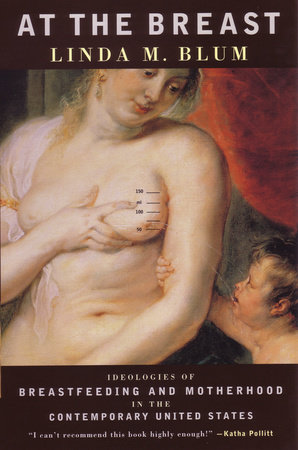 Ideologies of Breastfeeding and Motherhood in the Contemporary United States

About At the Breast

In our ironic, “postfeminist” age few experiences inspire the kind of passions that breastfeeding does. For advocates, breastfeeding is both the only way to supply babies with proper nutrition and the “bond” that cements the mother/child relationship. Mother’s milk remains “natural” in a world of genetically modified produce and corporate health care. But is it a realistic option for all women? And can a well-intentioned insistence on the necessity of breastfeeding become just another way to cast some women as bad mothers?

Linda M. Blum is author of Between Feminism and Labor: The Significance of the Comparable Worth Movement. She teaches sociology and women’s studies at the University of New Hampshire, and wrote this book while a Bunting Fellow at the Radcliffe Institute for Advanced Study.

At the Breast is feminist research of the highest order, setting a standard for how the work ought to be done. . . What is striking and admirable about [Blum’s] analysis is that in a discussion that has been almost entirely subsumed in concerns about what is best for babies, Blum focuses unwaveringly on mothers, on women as minded social beings. —Barbara Katz Rothman, American Journal of Sociology

“[Blum] discovers that in the contemporary world such an ancient and seemingly natural procedure as breastfeeding is embedded in a plethora of historical, political, racial, and economic contexts. . . . For the modern feminist, Blum concludes, the choice between the bottle or the breast should proceed from a careful assessment of the woman’s own needs and desires.” —Kirkus Reviews

“In the hands of Linda Blum, breastfeeding is a locus for conversations between women in different race and class locations about the female body, children’s needs, and the legitimizing role of fathers.” —Ellen Ross, author of Love and Toil: Motherhood in Outcast London, 1870-1918

“At the Breast is sociology at its best-we think of breastfeeding as ‘natural’ but of course it is social and cultural too. Blum’s discussion of how race and class shape women’s attitudes toward breastfeeding-and their chances of success with it-was a revelation to me.” —Katha Pollitt, columnist, The Nation