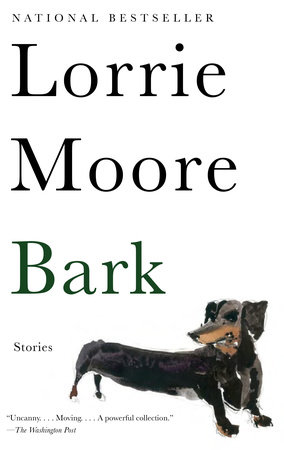 The questions, discussion topics, and reading list that follow are intended to enhance your reading group’s discussion of Bark, the first collection in fifteen years from acclaimed short-story writer Lorrie Moore.

“Fifty years from now, it may well turn out that the work of very few Americans writers has as much to say about what it means to be alive in our time as that of Lorrie Moore.”
—Harper’s Magazine

A literary event—a new collection of stories by one of America’s most beloved and admired short-story writers; her first collection in fifteen years, since Birds of America (“Fluid, cracked, mordant, colloquial . . . Will stand by itself as one of our funniest, most telling anatomies of human love and vulnerability.” —The New York Times Book Review, cover).

In these eight masterly stories, Lorrie Moore, in a perfect blend of craft and bewitched spirit, explores the passage of time, and summons up its inevitable sorrows and hilarious pitfalls to reveal her own exquisite, singular wisdom.

In “Debarking,” a newly divorced man tries to keep his wits about him as the United States prepares to invade Iraq, and against this ominous moment, we see—in all its irresistible hilarity and darkness—the perils of divorce and what can follow in its wake . . . In “Foes,” a political argument goes grotesquely awry as the events of 9/11 unexpectedly manifest at a fund-raising dinner in Georgetown . . . In “The Juniper Tree,” a teacher, visited by the ghost of her recently deceased friend, is forced to sing “The Star-Spangled Banner” in a kind of nightmare reunion . . . And in “Wings,” we watch the unraveling of two once-hopeful musicians who neither held fast to their dreams nor struck out along other paths, as Moore deftly depicts the intricacies of dead ends and the workings of regret . . .

Gimlet-eyed social observation, the public and private absurdities of American life, dramatic irony, and enduring half-cracked love wend their way through each of these narratives in a heartrending mash-up of the tragic and the laugh-out-loud—the hallmark of Lorrie Moore–land.

1. What is the metaphor of the title? How do the epigraphs help to set it up?

2. The stories share several themes, among them aging and the passage of time, parents and children, divorce and separation. What would you say is the primary theme of the collection?

3. Several of the story titles have multiple meanings. How does Moore’s wordplay keep the reader guessing?

4. The dialogue in Moore’s stories is often funny. Would you call the stories themselves humorous?

5. Real-life current events cast shadows over several of the stories. How does Moore use them to shape a deeper meaning?

6. In “Debarking,” when Zora tells Ira, “Every family is a family of alligators,” (p. 15), how does this foreshadow what’s to come?

8. Why do you think Moore titled the story following “Debarking” “The Juniper Tree”?

9. This second story has a dreamlike quality. Do you think Moore expects the reader to accept it as realistic?

10. In “Paper Losses,” Kit asserts: “A woman had to choose her own particular unhappiness carefully. That was the only happiness in life: to choose the best unhappiness” (p. 68). What do you think of this notion?

13. In “Subject to Search,” Tom says that cruelty comes naturally to everyone (p. 166). Do you agree? Does that assertion prove true in Moore’s stories?

14. “Thank You for Having Me” draws a clear connection between weddings and funerals, marriage and death. What connections have you seen in your own experience?

15. On page 184, Moore writes, “Maria was a narrative girl and the story had to be spellbinding or she lost interest in the main character, who was sometimes herself and sometimes not.” Which other characters in the collection could be described in this way?

16. Which of Moore’s characters would you most like to meet again?

Lorrie Moore, after serving as the Delmore Schwartz Professor in the Humanities at the University of Wisconsin–Madison for almost three decades, has been named the Gertrude Conaway Vanderbilt Professor of English at Vanderbilt University. She has received numerous grants and awards, including from the Lannan Foundation, the National Books Critics Circle, and the American Academy of Arts and Letters.
Learn More About Bark
print

The Love of a Good Woman
Alice Munro

Too Much Happiness
Alice Munro

The Book of Sand and Shakespeare’s Memory
Jorge Luis Borges

The Girl in the Flammable Skirt
Aimee Bender