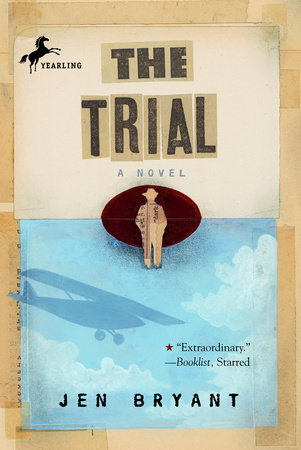 When Katie Leigh Flynn’s Uncle Jeff asks her to take notes for him during the Lindbergh kidnapping trial, not only is she allowed to miss school for six weeks, but she witnesses and records every aspect of “The Trial of the Century,” an experience that forever changes how she views life.

Charles Lindbergh achieved hero status as the first man to fly solo across the Atlantic Ocean in 1927. In 1932, his 20-month old son, Charles Jr., was taken from his crib on the second floor of the Lindbergh home. The kidnapping and the resulting trial of the accused kidnapper made headlines for years.
In The Trial, Katie help’s her uncle, a reporter for the local newspaper. She feels fortunate to be a part of the Lindbergh trial, even though it brings about much change in her life. Her mother remarries; her best friend moves away. Katie’s uncle finds a new place in her heart, and she realizes for the first time that life does not “lay out so neatly, pretty clear and straight.” But daily life goes on even though the small town of Flemington has been “invaded by Hollywood and the press.”

Jen Bryant has always loved books and views them as personal works of art. Her passion for reading led her to writing and her love for language allows her to play with the sounds of words while creating pictures. She considers writing “to be a blend of music and painting,” and her readers recognize her art when they read her work.
Ms. Bryant lives in Glenmoore, Pennsylvania with her husband, Neil; her daughter, Leigh; and their springer spaniel, Sam.

Pre-Reading Activity
Read the factual account of the Lindbergh trial to students, and then ask them to brainstorm a list of the people involved in the case. The following Web sites will be helpful: www.lindberghtrial.com/html/trial.shtml and www.lindberghtrial.com/html/players.shtml
In groups of three or four, ask students to draw a timeline beginning the night of the kidnapping and ending with the death of Bruno Richard Hauptmann, including all of the major events with the dates they occurred.

In the Classroom
Discuss current high-profile trials where the guilt of an individual was in question. Relate these trials to “The Trial of The Century,” where the Lindbergh baby was kidnapped and the world needed a scapegoat. Examine propaganda and it’s influence on justice.

Thematic Connections
Honesty–The honesty of Bruno Hauptmann and of the witnesses that changed their stories is questioned. (“Millard’s Tale,” p. 93) As the trial progresses, Katie begins to form an opinion about the guilt of Hauptmann. Reread “The Truth” on page 132 and “The Question” on page 138 and add to Katie’s doubts ones you might have about the conviction. Discuss the statement, “Do you swear to tell the truth and nothing but the truth?” How can the truth be different for different people?

Change–Many peoples’ lives, besides the Lindberghs’ and Hauptmanns’, were indelibly changed as a result of the kidnapping and the trial. Discuss the changes in Katie’s life that occurred during the trial and how her attitude toward life changed as a result of it. Was Katie accepting of the changes? Have students think about a time in their lives that change occurred, how did their attitude toward that change affected the outcome?

Propaganda–Information spread for the purpose of promoting a cause or idea is propaganda. The men reporting the trial did so from their point of view, persuading people to believe a certain way. Ask students if they think the media was biased against Hauptmann? If so, how do they think it affected the outcome of the trial? Does the news media in today’s society report the news with a personal bias? What evidence do students have to support their answer?

Friendship–Katie and her best friend, Mike, have a special friendship because each of them believes the best about each other, and they are content to be quiet together in comfortable silence. Ask students to brainstorm ways Mike and Katie show the true nature of their friendship. Then have the students list other characteristics and qualities a good friend has and evaluate their own friendships based on that list. What kind of a friend are they based on the list generated?

Justice–The poems “Snowball” on pp. 113—114 and “Framed” on pp. 115—116 seem to portray metaphorically the essence of the story surrounding the arrest, trial, and execution of Hauptmann. Record similarities between the two stories. Ask students if it is important to stand up for their rights, even if they don’t think others will believe them. What factors may have affected the outcome that have no place in matters of justice? Did Hauptmann’s death accomplish what Lindbergh had hoped for his family? (p. 171)

Connecting to the Curriculum
History–Choose one of the people from the list in the “When the Stars Come Out” and briefly research their life. (p. 83—84) Using the information students discovered, have them write a poem modeled after one of the character poems in the book. Then have students attach a picture of the person to the poem and display the poems on a bulletin board.

Social Studies–In the poem “Signs,” the author conveys the fear that many German Americans had during World War II and that Japanese Americans had after the bombing at Pearl Harbor. (p. 99) After September 11, 2001, people from the Middle East felt fear. Ask students if this fear was justifiable? Read the report on the following Web site: http://www.publicagenda.org/specials/terrorism/terror_pubopinion9.htm
Divide the class in half and have them debate the issue of racial profiling based on the information in the article.

Science–The investigation of the Lindbergh kidnapping happened in the mid-1930s. Have students choose a forensic procedure or a tool that is available in the 21st century that would have enabled the investigators to conclusively prove the guilt or innocence of Bruno Hauptmann. Research the technique and explain it to the class, using original illustrations drawn on a poster board.

Language Arts– “Souvenirs” illustrates how opportunists make money on the sorrow and hardship of others. (p.67) In today’s society this practice continues. Have students research recent news events that resulted in tragedies, hardships, and sorrows. How did or could opportunists have capitalized on these tragic human situations? Do you think this practice is right or wrong? Write a letter to the editor of your local paper stating your opinion and support it with research.

The price of being a hero can be high. Read “Hero” on p. 63 and “January 11, 1935” on p. 95 and have students answer these questions: Why is it a responsibility to be a hero? What does it cost to be a hero? Consider professional athletes, war heroes, and the recent heroes after the attack on September 11, 2001. To see both sides of the issue, have students pick an individual they consider a hero. Then, write a speech from that individual telling why it is a privilege to be a role model and hero. Juxtapose the speech against a letter this person would have written to a family member expressing the stress and problems of hero life.

Most poetry uses imagery to convey pictures with words. Have students reread “Finger Music”, paying close attention to the similes. (p.71) Using this poem as an example, they can choose a sound familiar to them and convey the sound using a series of similes. Then, have them share the poems with the class.

Linbergh Trial
www.lindberghtrial.com
An overview of the crime, the trial, the people involved, and photographs.

Charles Lindbergh: An American Aviator
www.charleslindbergh.com
A collection of historical accounts of Lindbergh’s flight, his life, and the planes he flew.

New Jersey’s Great Northwest Skylands
www.njskylands.com/tnflemington.htm
An overview of the town of Flemington, New Jersey, where the crime and trial took place and where Katie lived.

Public Agenda Special Edition: Terrorism
www.publicagenda.org/specials/terrorism/terror_pubopinion9.htm
A report on racial profiling of Middle Eastern people after the attack on September 11, 2001.


Learn More About The Trial
print

The Puzzling World of Winston Breen

Into the Firestorm: A Novel of San Francisco, 1906
Back to Top