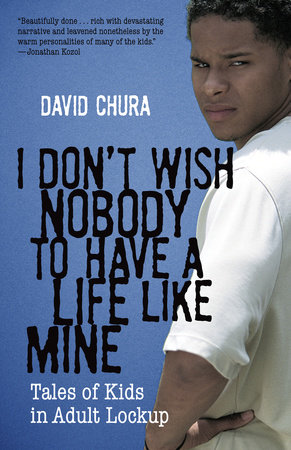 I Don't Wish Nobody to Have a Life Like Mine

Tales of Kids in Adult Lockup

Tales of Kids in Adult Lockup 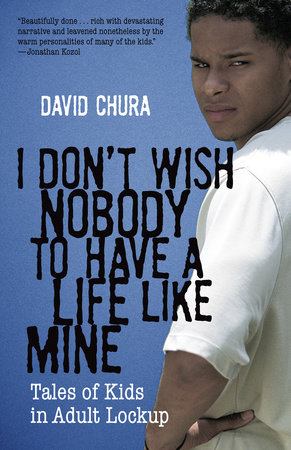 David Chura taught high school in a New York county penitentiary for ten years—five days a week, seven hours a day. In these pages, he gives a face to a population regularly demonized and reduced to statistics by the mainstream media. Through language marked by both the grit of the street and the expansiveness of poetry, the stories of these young people break down the di­visions we so easily erect between us and them, the keepers and the kept—and call into question the increasing practice of sentencing juveniles as adults.

Since the early 1990s, thanks to inflamed rhetoric in the media about “superpredators” and a wave of get-tough-on-crime laws, the number of juveniles in prison has risen by 35 percent, according to the U.S. Department of Justice, and their placement in adult prison has increased by 208 percent, according to a 2007 survey by the Campaign for Youth. Since 1992, every state except Nebraska has passed laws making it easier to prosecute youth under eighteen as adults, and most states have legalized harsher sentences for juveniles.

David Chura taught high school in a New York county penitentiary for ten years and saw these young people—and the effects of our laws on them—up close. Here he introduces us to the real kids behind the hysteria: vibrant, animated kids full of humor and passion; kids who were born into families broken up and beaten down by drugs, gang violence, AIDS, poverty, and abuse. He also introduces us to wardens, correctional officers, family members, and doctors, and shows how everyone in this world is a child of disappointment.

We meet Wade, who carries a stack of photos of his HIV-positive mother in his pocket to take out and share with pride. Khalil has spent all fifteen years of his life in foster care, group homes, juvenile detention, and mental hospitals, yet has channeled his inner demons into poetry. There’s Anna, a hard-nosed one-time teenage drug baroness who serves as a tutor to students and older women alike; Dominic, a father of two who only reads in jail, and only the Harry Potter books; and Eddyberto, a bright student and self-taught artist whose wildly creative drawings are confiscated and used to accuse him of being a potential terrorist and threat to national security.

Then there’s O’Shay, a big, burly, snarling Bronx-Irish classroom officer with a surprising protective side for the underdog, and Ms. Wharton, a hallway officer with a spiky demeanor but a soft spot for animals.

In language that carries both the grit of the street and the expansiveness of poetry, Chura breaks down the divisions we so easily erect between us and them, the keepers and the kept—and shows how, ultimately, we as individuals and as a society have failed these young people.


“Riveting . . . An indictment of the system.”—Sam Roberts, New York Times

“As U.S. courts send more than 250,000 minors each year into adult prisons (according to a 2008 Juvenile Justice report), Chura’s anguished, incisive depiction of one of those outposts is . . . a compelling call to repair our society’s brokenness.”—Cathi Dunn MacRae, Youth Today

“In its many twists and turns, the book discovers in the prison labyrinth a metaphor of the confinements and refuges of the human spirit. In the face of every person he so carefully depicts, the author shows us a mirror.”—David Kaczynski, Times Union

“[Chura] recalls the raw, gritty emotions of young men with little education and few options. . . . A compelling personal look at the failings of the juvenile justice system.”—Booklist

Chapter One: The Human Stain

Chapter Two: From the Projects to the Condos

Chapter Ten: The Things They Carried

Looking for More Great Reads?
21 Books You’ve Been Meaning to Read
Download Hi Res
I Don't Wish Nobody to Have a Life Like Mine

I Don't Wish Nobody to Have a Life Like Mine