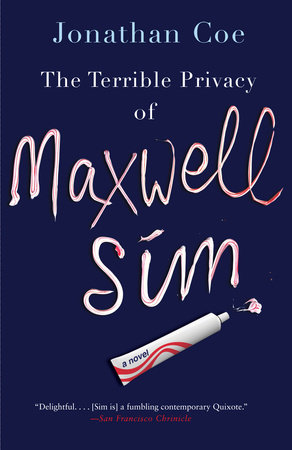 Maxwell Sim can’t seem to make a single meaningful connection. His absent father was always more interested in poetry; he maintains an e-mail correspondence with his estranged wife, though under a false identity; his incomprehensible teenage daughter prefers her BlackBerry to his conversation; and his best friend since childhood is refusing to return his calls. He has seventy-four friends on Facebook, but nobody to talk to.

In an attempt to stir himself out of this horrible rut, Max quits his job as a customer liaison at the local department store and accepts a strange business proposition that falls in his lap by chance: he’s hired to drive a Prius full of toothbrushes to the remote Shetland Islands, part of a misguided promotional campaign for a dental hygiene company intent on illustrating the slogan “We Reach Furthest.”

But Max’s trip doesn’t go as planned, as he’s unable to resist making a series of impromptu visits to important figures from his past who live en route. After a string of cruelly enlightening and intensely awkward misadventures, he finds himself falling in love with the soothing voice of his GPS system (“Emma”) and obsessively identifying with a sailor who perpetrated a notorious hoax and subsequently lost his mind. Eventually Max begins to wonder if perhaps it’s a severe lack of self-knowledge that’s hampering his ability to form actual relationships.

A humane satire and modern-day picaresque, The Terrible Privacy of Maxwell Sim is a gently comic and rollickingly entertaining novel about the paradoxical difficulties of making genuine attachments in a world of advanced communications technology and rampant social networking.

1. On a superficial level, The Terrible Privacy of Maxwell Sim is about a depressed, recently divorced, middle-aged customer relations representative who take a leave of absence and then becomes a toothbrush salesman—hardly an irresistible premise for a novel. How does Coe manage to take such inauspicious circumstances and spin from them such a brilliant fictional work? What are the larger themes that emerge from the novel?

3. When Max tells people his name, he explains, depending on the age of the person he’s speaking to, that his last name is Sim—like the SIM (Subscriber Identity Module) memory card in a cell phone or like the game that allows users to create a simulated city complete with simulated citizens, or Sims. Why would Coe have chosen this name for his protagonist?

4. The novel is titled The Terrible Privacy of Maxwell Sim and yet Max himself claims that there is “no such thing as privacy anymore. We were never really alone” [p. 72-73]. In what ways is Max both alone and not alone, robbed of privacy and at the same time a victim of it?

5. Over dinner in a restaurant, both Max and his daughter Lucy are more absorbed in sending and receiving text messages than they are in each other’s company, which prompts Max to remember the wonderful intimacy he’d observed between the woman and her daughter. What is the novel saying about the role of new technologies such as BlackBerrys, SatNavs, cell phones, Facebook, etc., in our lives?

6. The novel is filled with surprises—sudden turnings, strange coincidences, stunning revelations. What are some of the most startling moments in the book? How do these create narrative tension and draw the reader on?

7. Max is both a narrator and a reader in the novel, as the story he is telling contains several other stories within it—Caroline’s short story “The Nettle Pit,” Alison’s essay “The Folded Photograph,” and Max’s father’s memoir “The Rising Sun.” What does Max learn about himself through reading these narratives? What do they add to the overall structure of the novel?

8. Just before Caroline leaves Max, she says, “How can anybody like a man who doesn’t even like himself?” [p. 13]. What is the source of Max’s inability to accept and to like himself? Does he come to greater self-acceptance by the end of the novel? In what ways do his struggles mirror those of his father?

9. Why does Max identify so strongly with Crowhurst? What are the consequences of this obsessive identification?

10. Discussing his complicated scheme to make money out of nothing, Roger Anstruther tells Max’s father: “Don’t become one of those lesser mortals who inhabits the material world. The world where people spend their lives making things and then buying and selling and using and consuming them. The world of objects. That’s for the hoi polloi, not the likes of you and me. We’re above all that. We’re alchemists” [p. 297]. In what ways do Roger’s exhortations here embody the Masters of the Universe ethos of the financial wizards who nearly destroyed the world economy in 2008? What are the dangers inherent in wishing to live “above” the material world?

11. Max recalls the quote by E. M. Forster “Only connect,” and reflects that the highways in Great Britain seem to have been designed to fulfill the opposite injunction: Only disconnect. In what ways does the novel dramatize the disconnection of modern life?

12. Why does Max feel so comforted by “Emma,” the voice of his Toyota’s Satellite Navigation system? In what ways is his “relationship” with her genuinely healing for him?

14. What does the novel as a whole say about the emotional costs of repressing one’s sexual identity?

15. The Terrible Privacy of Maxwell Sim, though it is an emotionally powerful, realistic narrative, could be described as meta-fiction. How surprising is the novel’s remarkable ending? In what ways does the ending force the reader to rethink all that has come before?

Jonathan Coe’s awards include the John Llewellyn Rhys Prize, the Prix du Meilleur Livre Étranger, the Prix Médicis Étranger and, for The Rotters’ Club, the Bollinger Everyman Wodehouse Prize. He lives in London with his wife and their two daughters.

Life and Death of Harriett Frean

The Whole Story and Other Stories