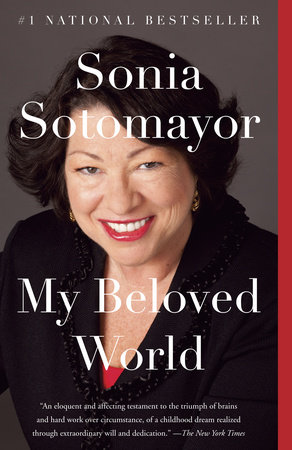 The questions, discussion topics, and suggestions for further reading that follow are designed to enhance your group’s conversation about My Beloved World by Sonia Sotomayor, the first Hispanic to serve on the United States Supreme Court.  Direct, candid, and inspiring, she describes her difficult childhood, her path to success at Princeton University and Yale Law School, and the realization of her dream of becoming a judge.

Born in 1954, Sotomayor grew up in an impoverished, close-knit Puerto Rican community in the South Bronx. Her mother was often absent, working long hours as a nurse; her father was an alcoholic. When she was diagnosed with diabetes at the age of seven, Sotomayor learned to give herself daily insulin shots, taking on the responsibility that both her parents found difficult.  Sotomayor escaped the tensions at home at her grandmother’s among a loving extended family and discovered the pleasures and rewards of education at the strict Catholic schools she attended.  A top-notch student, she went to Princeton, and on to Yale Law School.  As a young lawyer, she worked at the New York City District Attorney’s office and moved on to private practice at a prestigious law firm; at the age of 38, she was appointed to the Federal District Court.

From intimate snapshots of her childhood to nuanced reflections on affirmative action, the legal profession, and the strengths and shortcomings of American society today, My Beloved World shines with the intelligence, enthusiasm, good humor, and compassion Sotomayor has brought to every step of her extraordinary journey.

1. What do Sotomayor’s descriptions of her childhood convey about Spanish-speaking communities in New York?  In what ways are the hardships in her household—the lack of financial resources, her father’s alcoholism, and the tension between her parents—exacerbated by the strains of living in a marginalized society? What family or cultural traditions help mitigate the difficulties she and her family face? Are there traditions in other cultures  including your own that serve the same function?

2. When she learns she has diabetes, Sotomayor thinks, “I probably wasn’t going to live as long as most people…So I couldn’t afford to waste time” [p. 99]. What does her reaction reveal about the way Sotomayor views herself and the possibilities available to her?  In what ways does it establish a pattern for her behavior throughout her life? What other life events, like Sotomayor’s chronic illness, can alter a person’s outlook?

3. Sotomayor writes, “My father’s neglect made me sad; but I intuitively understood that he could not help himself; my mother’s neglect made me angry” [p. 16].  This is a child’s perspective of her life at the time.  Is it fair?  If so, in which ways and if not, what nuances of addiction and family’s responses are missing?

4. How do her visits to Puerto Rico enrich Sotomayor’s appreciation of her background? What aspects of her time there give her a sense of pride? Why does the island’s physical beauty, the museum she visits, and the warm connections among her relatives affect her so deeply [pp. 40-48]?  Compare her impressions as a child to her perspective as an adult [pp. 191-192].  Do visits, traditions, or other events evoke an appreciation of your own background?

5. In describing the visit to her maternal grandfather, Sotomayor writes, “I have carried the memory of that day as a grave caution” [p. 49]. Why do you think her mother never spoke to Sotomayor about being abandoned as a child? Are there good reasons for keeping an unhappy past from one’s own children?  Do you agree that “without acknowledgment and communication, forgiveness is beyond reach” or do you think that it is possible to forgive someone who is unable or unwilling to acknowledge their impact on your life?

7. When Sotomayor arrives at Princeton she finds “that many of my classmates seemed to come from another planet and that that impression was reciprocated” [p. 160]. What role does gender and ethnicity play in her sense of isolation and insecurity?  What helps her adjust to the unfamiliar, often unfriendly, atmosphere of Princeton?  Are there other means that she might have tried?

8. In addition to the barriers women and minorities faced at traditionally male, white universities, students of Sotomayor’s generation faced the polarizing effects of affirmative action:  “The Daily Princetonian routinely published letters to the editor lamenting the presence of ‘affirmative action students’” [p. 183].  What arguments can be made on either side for supporting or opposing affirmative action programs?  Did the book assist you in understanding the debate better?

9. In reviewing the repercussions of affirmative action, Sotomayor writes, “Much has changed in the thinking about affirmative action since those early days when it opened doors in my life and Junior’s. But one thing has not changed: to doubt the worth of minority students’ achievement when they succeed is only to present another face of the prejudice that would deny them a chance even to try” [p. 245].  Have the prejudices Sotomayor encountered changed over the ensuing decades? Are things better, worse, or the same?

10. At Yale Law School Sotomayor met José Cabranes, whom she calls “the first person I can describe as a true mentor” [p. 224]. What does Cabranes represent to her?  How do the mentors she meets at various stages of her life shape her approach to her role as a model for others?  Do you have mentors in your life who have provided or now provide support in different ways?

11. What does she learn at Yale and later as an Assistant DA in New York City and as a lawyer in private practice about the assumptions made about her based on her gender and ethnicity? In what ways do her experiences in both the public and private sectors defy her assumptions?  What assumptions about yourself do you regularly encounter and how do you deal with them?

12. Sotomayor describes several of the cases she took on at the District Attorney’s office and at Pavia & Harcourt.  What do these descriptions contribute to the memoir?  What insights do they offer into the workings of the legal profession as well as Sotomayor’s personal approach to the practice of law?

13. Sotomayor writes candidly about her divorce [p. 280-285]. Are the difficulties she and Kevin faced common in relationships that begin during the teenage years or in situations where the wife is more successful than the husband? Discuss the regrets and self-criticism Sotomayor offers in describing the reasons for her failed marriage. Do you think she and Kevin could have had a successful marriage given their circumstances?

14. How have Sotomayor’s strong attachments to her community, family, and friends shaped her personality and unique perspective?  How do they reflect the attitudes she acquired growing up in a Puerto Rican culture? Are these attitudes that can be acquired in different ways?

15. What different groups does Sotomayor identify with in the course of her narrative? How does her self-image change as she pursues her education and career? How does she define herself at the memoir’s end? How do you define yourself and your life?

16. How would you describe the tone of My Beloved World? Talk about the effects of her touches of humor (including self-mockery); frank appraisals of herself and others; and informal style on your appreciation of her story. Are there aspects of her life you think she should have explored more fully?

The Other Wes Moore

The Autobiography of Malcolm X

Once Upon a Secret

Funny in Farsi
Back to Top