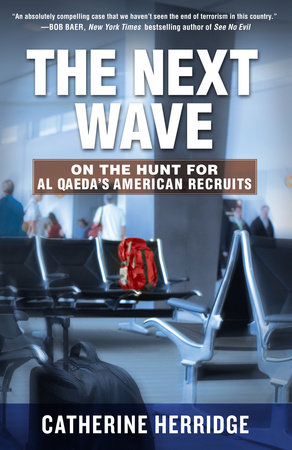 On the Hunt for Al Qaeda's American Recruits

About The Next Wave

TERROR WALKS AMONG US. Born here, raised here, plotting here, the terrorists of al Qaeda 2.0 aim to kill Americans. And our government helps.

Who are the recruits for the next wave? They live next door.

A radicalized army major guns down forty-five, killing twelve soldiers and one civilian; an airport shuttle-bus driver plots a subway slaughter; a legal immigrant tries to blow up Times Square while another fanatic hopes to kill hundreds at a Christmas tree–lighting ceremony . . . and a radical Muslim born in New Mexico has a legion of fanatics in his web.
The Next Wave reveals the shocking story of how that blood-crazed American, Anwar al-Awlaki—now hiding in Yemen—was treated to Pentagon pomp as a “moderate Muslim,” and how our Justice Department hid his movements from the 9/11 Commission . . . even though al-Awlaki aided the 9/11 hijackers.

The terrorists next door turn our tech against us, exploiting Facebook, Skype, and our outdated laws. Online terror recruiters are one of the Web’s greatest success stories—yet our government refuses to stop them. Activists howl about “inhuman” conditions at Guantánamo—while pampered inmates laugh at our weaknesses.
The next wave of deadly terror is here and now. Washington shuts its eyes. And the next massacre in the name of Islam will be “Made in the U.S.

From Guantánamo to Afghanistan, Fox News national correspondent Catherine Herridge has looked the world’s worst terrorists in the face. A “reporter’s reporter,” she and her investigative team spent years scouring the United States and the world to uncover the shocking… More about Catherine Herridge

“An absolutely compelling case that we haven’t seen the end of terrorism in this country. In a gripping narrative,  Herridge tells how it was only by sheer luck we sidestepped al Qaeda’s “second wave” – and we’ll need all the more of it not to be hit by the next.” – Bob Baer, New York Times bestselling author of See No Evil and Sleeping with the Devil

“The only thing more disturbing than al Qaeda’s efforts to recruit U.S. citizens to harm America is its success at doing so. Expertly investigated, The Next Wave delivers a powerfully written, fresh look at homegrown terrorism in its most insidious form – and gives every reason to believe that the question is not whether an attack will occur, but when.”
– The Honorable Tom Ridge

“Catherine Herridge has written a book that, from start to finish, grabs the reader.  It is a fabulous look into her complex world that contains detailed observations and shocking revelations.  Woven into the back story is the harsh reality of U.S. government incompetence, cover-up and deception – all focused on self-serving bureaucratic ass-covering that continues to endanger the well being of the American people.  She is able to provide a dire forecast – a storm warning if you will – of the next generation of Muslim extremism and how they are evolving and adapting to the 21st century.  Her work should be read – and internalized – by anyone who wants to learn how we must improve U.S. national security, counterterrorism and intelligence collection. Herridge’s investigation of al Qaeda 2.0 reads like a novel.  Herridge comes from a military family — so her reporting on national security issues is deeply personal. The Next Wave is an action adventure — like a “mission impossible” military mom.”
—Tony Shaffer, LtCol (USAR), bestselling author of Operation DARK HEART, and Senior Fellow, Center for Advanced Defense Studies

“Even before Osama bin Laden’s death, al Qa’ida had shown itself to be an organization as adaptable as it was deadly.  With their plots frustrated at one level, they have adjusted their approach.  Catherine Herridge’s The Next Wave chronicles that adjustment–including more AQ reliance on the self radicalized, home grown, lower threshold threat–and challenges us to adapt as quickly and as well as our murderous adversary.  This is a must read for anyone who wants to understand where this war is going and what we need to do to win it.”
–General Michael Hayden, former director CIA and NSA

“Written with no-nonsense clarity, moral rigor and hard-earned expertise, The Next Wave is a landmark in investigative journalism.  This book by our most-relentless reporter on national security reveals in sharp detail how Washington’s infighting, political correctness and outright duplicity enable home-grown Islamist terrorists to attack Americans–by turning our own freedoms and laws against us.  Fierce, first-rate and frightening.”
—Ralph Peters, former U.S. Army intelligence officer and author of Endless War: Middle-Eastern Islam vs. Western Civilization.


“This is a must read for every American. The domestic terrorist threat is real! America’s response has been disappointing. Explore the world of the growing and evolving danger of homegrown terrorism in this compelling analysis.” – Congressman Pete Hoekstra — Chairman/Ranking member House Intelligence Committee (2004 – 2011)


“Catherine Herridge is quite simply the best national security reporter on television today.  She breaks news, and tracks down stories before the mainstream media – and even the U.S. government – know about them.  If you want the inside story of how an American Muslim cleric became al Qaeda’s  top recruiter and propagandist, and the growing danger posed by cadre of traitors – al Qaeda’s American recruits – you must read this book.” – Marc Thiessen

“Catherine Herridge’s The Next Wave is a desperately needed antidote to the soothing, politically correct, but ultimately lethal pabulum about militant Islamism fed to Americans by leaders in both parties and their academic and mainstream-media acolytes. Ms. Herridge’s investigatory reporting details the growing appeal of bin Laden’s call to jihad among young U.S.-citizen Muslim males, as well as the damage they already have done in America due to a lack of focused, enduring attention from government and law-enforcement officials at all levels, men and women who fear a backlash from bin Laden’s able, if unthinking abettors in U.S.-based Muslim advocacy groups, the ACLU, and other champions of multiculturalism. Ms. Herridge’s The Next Wave makes clear that a front in the war America is fighting overseas against Islamist militancy is well established in the United States, that it is growing and attracting intelligent fighters, and that it intends widespread violence in our cities and towns.” –Michael Scheuer, author of Osama bin Laden and Adjunct Professor of Security Studies at Georgetown University