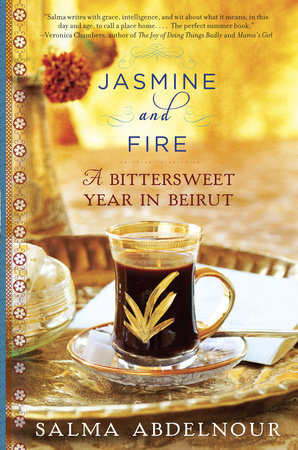 1. In the introduction to Jasmine and Fire, Salma describes her lifelong craving for home, but she also wonders, “What did home mean anyway?” For Salma, the sense of losing home kicked in after her family left Beirut, but as the years went on, that sense became more nebulous, even as it persisted. What does home mean for you? How would you define the word, for yourself and/or universally?

2. Even though Salma has spent years as a travel and food writer for magazines and newspapers, when she first arrives in Beirut in August, she’s overwhelmed with a sense of sadness and anxiety. Why? Think back to the last few times you’ve gone on a trip. What feelings did you have when you arrived? How is traveling somewhere for a few days different than for a week or a month or longer?

3. In the October chapter, Salma throws herself a housewarming dinner party to both symbolize and celebrate her move to Beirut, and also to feel more at home in the apartment and the city. What details of that dinner party, or Salma’s preparations for it, stood out to you the most? Does bringing people into your home, after you first move in somewhere, help you feel more grounded? How and why? Have you ever had a housewarming celebration in a new home?

4. Salma describes the long strolls she takes around Beirut and writes that “walking always helps bind me to a place and clarify my feelings for it.” What details do you remember most from her walks along the Beirut streets? Can you recall an especially memorable exploration of a new place you’ve found yourself in, whether a city or a neighborhood or just a street?

5. “Do we move to a city and then it becomes home?” Salma asks in the October chapter. “Or in these days, when we have more choices of where to live, do we choose to live somewhere long term mainly because it feels like home?” What are the most essential elements guiding your decision to live in a specific place? Is the place where you live truly home? Or where do you imagine would feel more like home for you?

6. In the November, December, and later chapters, Salma attends various events commemorating Christian (Christmas, Easter) and Muslim (Ramadan, Ashura) holidays in Beirut, and she also goes to three American-style Thanksgiving dinners. How does this portrait of life in Beirut in the twenty-first century strike you? Is it similar to what you might have imagined Beirut to be like? How does it tie in, or not, with your sense of life in the Middle East?

7. In Beirut, locals often speak French or English instead of Arabic among themselves, even if there are no foreigners present. In the November chapter, Salma laments the sense she gets that the Lebanese are “running away from” their own language. Do you agree that locals should speak their country’s native language? If you were visiting Beirut, would you be comforted to find the Lebanese speaking your language (if it’s English or French) to you? Or would you prefer to be surrounded by the sounds of a foreign language (if Arabic is foreign to you)?

8. In the January chapter, Salma pokes fun at the international media for describing Lebanon as a country that’s either constantly at war or constantly partying. Having read Jasmine and Fire, how do you think those characterizations either do a disservice to or accurately portray Lebanon?

9. In the February, March, and April chapters, Salma discusses the political tensions that come up in her relationship with her boyfriend, who is American and Jewish. Neither Salma nor Richard considers themselves religious, or a nationalist, and yet when they debate Middle East politics—particularly pertaining to Lebanon, Israel, the Palestinians, and related issues—they often find themselves backed into separate corners, as Salma notes with frustration after one of their arguments. Is it possible to get past identity politics in a place like the Middle East, or in America for that matter? How do the cultural, national, or religious identities we grew up with cause us to react to other groups’ realities and struggles? How might those identities, whether we embrace or reject them, help us see both or all sides more sympathetically?

10. In the May chapter, Salma spends time in some particularly beautiful villages in Lebanon and declares: “I love Lebanon. I really love it here.” Then she interrogates that feeling, and wonders what it means to love a country. Does loving a country make you a nationalist? What is nationalism, at its core? How can you both love a country and find it deeply, even tragically flawed?

11. In the June and July chapters, Salma wrestles with the idea of leaving Beirut and moving back to New York. What would you have done in the same circumstances?

12. Throughout Jasmine and Fire, Salma describes food-related moments and discoveries that helped her reconnect with her past as well as learn more about Lebanon, and come back home to it in visceral ways, both physically and emotionally. Have certain food memories or experiences brought you home again, or helped you connect with a new place? Are there other sensory experiences (say, musical, environmental, spiritual) that have a similar effect on you?

13. How do the foods described in Jasmine and Fire relate to your previous conception of Lebanese or Middle Eastern food? What are the dishes or descriptions that resonated with you most?

14. Throughout Jasmine and Fire, Salma mentions family friends and relatives who stayed in Lebanon for the entire fifteen-year civil war, which lasted another nine years after Salma’s parents decided to move the family to the States. If the city or country where you were living became dangerous or difficult to live in—because of war or a devastating natural disaster, for example—would you pack up and leave? What would make you decide to stay, or go?

15. How does Salma resolve the question of home in the end—or does she? How do you relate to the home or homes in your life? Are you happy with your relationship to home, whatever “home” means to you, or would you like to change or redefine it? How does Jasmine and Fire finally answer the question “Can you go home again?” whether for its own author or for readers who might be fantasizing about a similar journey?
Learn More About Jasmine and Fire
print

Sideways on a Scooter
Miranda Kennedy

The Secrets of Mariko
Elisabeth Bumiller

I Should Have Honor
Khalida Brohi

Beyond the Sky and the Earth
Jamie Zeppa