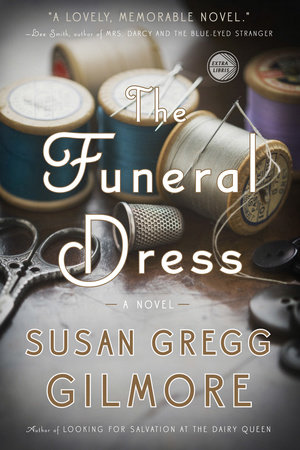 Please note: In order to provide reading groups with the most informed and thought-provoking questions possible, it is necessary to reveal important aspects of the plot of this novel—as well as the ending. If you have not finished reading The Funeral Dress, we respectfully suggest that you may want to wait before reviewing this guide.

1. Eudora Welty wrote, “Every story would be another story, and unrecognizable if it took up its characters and plot and happened somewhere else. . .” With this in mind, do you think the Southern Appalachian setting of The Funeral Dress is integral to the telling of its story? And in what ways does Emmalee’s life in the holler and Leona’s life on the mountain affect their attitudes and their relationships, particularly in the face of hardship and loss?

2. Why is it so difficult for Emmalee to leave Nolan and Red Chert Holler, even though her day-to-day existence is difficult and her father’s abuse emotionally and physically painful? How does Nolan’s grim work, assisting the town’s funeral director, affect Emmalee’s outlook toward the living and the dead?

3. Emmalee gives birth to her baby girl on the shirt factory’s floor. A single, teenaged mother, Emmalee feels burdened
by her daughter’s care. Only as Cora, Wilma, and Easter embrace Emmalee does she begin to see herself as a mother. How do you imagine attitudes toward teen pregnancy have changed in the past thirty-five years? Do you think TV reality shows highlighting teenaged pregnant moms have affected our attitudes toward teen pregnancy?

4. When Mr. Fulton learns that Emmalee’s baby is his own grandchild, he faces serious moral and ethical decisions. How does Mr. Fulton negotiate his relationship with his wife, son, and Emmalee while also dealing with the scrutiny of a small town?

5. Southern textile mills and factories provided many women a first opportunity to earn money of their own and gain
some financial independence. What types of challenges at work and in the community do you think blue-collar working women like Cora, Wilma, and Easter faced? And how do you think these challenges have changed since the mid-1970s?

6. Religion, church, and God mean very different things to Leona and Emmalee. Leona attends Sunday and Wednesday services regularly, but it seems an obligation, whereas Emmalee doesn’t attend church but faithfully makes her crosses for every Cullen resident who dies. What do you imagine the relationship with God and church may mean to someone living in a small town versus a large metropolitan area? And what do you think it would be like to feel alienated from formal, organized religion in such a place?

7. References to birds are made frequently throughout the book. The first mention is “A redbird rapped at the trailer’s far window, but it flitted off before Leona could blow a kiss and wish for something better” (page 25). More than good luck, what do these birds represent in the telling of this story?

9. Mr. Clayton and Leona’s adulterous relationship was judged harshly by the other seamstresses at Tennewa. Do you think these women were unfair in their judgments?

10. Leona’s death was sudden and tragic, and no one felt her absence more acutely than Emmalee. Do you think Emmalee became a stronger, more independent woman because of her friend’s death? And in what ways do you think Emmalee’s making of Leona’s burial dress affected her and her relationship with her baby girl?

11. What do you see ahead for Emmalee? Do you think she will be up to the challenges she’ll face while raising Kelly Faye?

Looking for Salvation at the Dairy Queen

The Year of Pleasures

The Sleepwalker’s Guide to Dancing

The Homecoming of Samuel Lake

The Pull of the Moon
Back to Top