May the Road Rise Up to Meet You Reader’s Guide 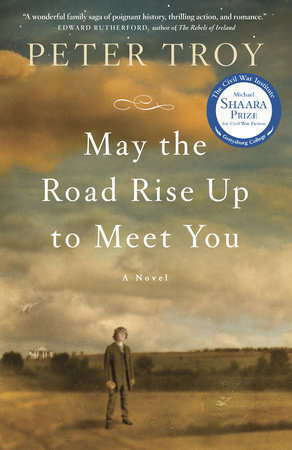 May the Road Rise Up to Meet You Reader’s Guide

The introduction, discussion questions, and suggested further reading that follow are designed to enhance your group’s discussion of May the Road Rise Up to Meet You, Peter Troy’s sweeping novel of the American Civil War told from the perspectives of four distinct characters: Irish immigrant Ethan McOwen, Spanish immigrant and abolitionist Marcella, and two slaves, Mary and Micah.

It’s the middle of the nineteenth century in Ireland, and The Hunger has claimed Ethan’s older sister (and best friend) Aislinn.  Desperate to save her starving son’s life, Ethan’s mother books passage for the twelve-year boy to sail alone to America with the hope of joining his father and older brother in New York. After an arduous crossing, Ethan is faced with the prospects of a life of corruption and crime in the notorious Five Points, but instead follows two newfound passions: baseball and photography.  When the Civil War breaks out, he is among the first to enlist in the famed Fightin’ 69th Regiment of the Irish Brigade.

When an injured Ethan returns to New York, he is praised for the photographs he sent back from the trenches. At a sponsored exhibition of his work, Ethan meets the beautiful and intelligent Marcella, a society woman originally from Spain who has defied her family to follow her own ambitions in life, including becoming an important abolitionist. These two individualists are an instant match. But Ethan is due back at the front, and their fledgling love is put on hold, relegated to an intense correspondence of letters.

In the meantime, Mary, a young slave girl, is being auctioned to a wealthy Richmond merchant family, in whose home she’s able to practice her talent as a seamstress and quickly proves herself worthy of a position in the family’s dress shop before war changes all of their lives. While volunteering at the local hospital washing bandages, Mary encounters Micah, a plantation slave temporarily doing carpentry work for the hospital. Micah’s circumstances are much worse than Mary’s, but he has a resilient soul. Having each been torn from their families at a young age, they find in each other affirmation that they are not alone in the world.  Their courtship of stolen moments soon turns to love and they plot a clandestine Christmas Eve escape…but things will not go as planned.

Written in richly textured historical detail, these four parallel stories ultimately collide in this all-consuming saga about faith, freedom, family, and the triumph of love.

1. While faith is never discussed in specific terms, how is Gertie’s stitchin’ in the prologue, and its connection to the final scene, a metaphor for faith?

2. If anger, hurt, disappointment, fear and doubt are some of the principle obstacles to faith, how do these elements affect the four main characters?  Discuss specific moments when each of them confronts these aspects within themselves and the change, if any, which comes from them.

3. The “Great Hunger” (also called the “Potato Famine”) in Ireland is a generally misunderstood period in history, often being left out completely from American textbooks or covered only for the impact it had on Irish immigration to America.  It is estimated that more than one million deaths can be attributed to disease and starvation between the years of 1846-1851, and between death and emigration, Ireland’s population decreased by fully 20% during those few years. Considering that Ireland continued to export food to England during the worst years of The Hunger, why is the term “famine” a misnomer, and how does it reflect the notion that the winners write the history books?

4. Why might Ethan’s Mam consider the stories Mr. Hanratty tells Ethan to be potentially quite dangerous?

5. How does Mr. Hanratty’s statement to Ethan, “If it’s a happy tale yer after, den sure you was bahrn in th’wrong land,” reflect the tragic impact English policies had on Irish attitudes?

6. As Ethan views his native land in the increasing distance from onboard the ferry, he begins to understand why Mr. Hanratty would refer to Ireland as “she” or “her” and not “it.” Discuss the emotional impact leaving one’s native land under such circumstances would have on a person.  How might that affect how they view their adoptive country in ways good and bad?

7. How is Ethan’s experience with the College Professor reflective of the attitudes of many people towards immigrants?

8. Counting both Union and Confederate casualties, there were almost as many American lives lost in the Civil War as in all other American wars combined.  Yet at the start of it, neither side believed it would last more than a few months. When Ethan and his friends enlist, what is their attitude towards the war?  How is their enthusiasm changed after their first battle?

9. All four main characters are greatly influenced by a loved one who has passed away.  How do some of the characters “communicate” with their loved ones and how does this affect them?

10. Discuss the impact reading and writing have on of each of the four main character’s lives.

11. Each character is assigned their own narrative voice and grammatical structure throughout the book.  How and why do they change, either subtly (Ethan, Marcella, Micah), or dramatically (Mary), as their stories progress?

12. For each of the four main characters, the Civil War, in a manner of speaking, “makes” them.  How does the outbreak of the war alter their lives permanently?

13. How are the love stories of Ethan and Marcella, Mary and Micah similar?  How are they different?

14. What is the significance of the term “frontsways”?  Where does it come from originally and how does it apply to the journey of all four characters?

15. How is the author’s use of different narrative voices, perspectives, and grammatical structure, a metaphor related to this very theme?

16. Each of the four main characters is born into a situation where he or she is instructed in no uncertain terms to understand their “place.”  Whether it is at the lowest or highest levels of the social hierarchy, there are quite specific sets of instructions on how to properly behave so as not to place themselves outside the realm of normalcy. Discuss the general restrictions placed upon each character, Mary and Micah as slaves, Marcella as a woman, Ethan as a poor Irishman. How is each character reminded by someone close to them to stay within the range of accepted behavior? How does each character, either secretly or overtly, rebel against those same instructions? What are the results of these rebellions and how does it alter the life of each character?

17. The issue of race has been a contentious one in American society, politics and culture from the very early days of the Colonial Age until the present day, often impacting the portrayal of different characters in film and literature through a stereotypical lens. How are Micah and Mary different from the stereotypical slave? How is their ascent from slavery first a mental journey, then a physical one?

18. The range of slave/owner relationships in the book is extensive, from brutality to pseudo-love.  How does this reflect the psychological and emotional impact of slavery on both the slaves and their owners?

19. How is the relationship that develops between Ethan and Micah made possible?  What encounters along their journeys are critical in forming their attitudes towards each other and their acceptance of each other as men, regardless of color?

20. When Marcella visits the First African Baptist Church in Savannah, Georgia, she identifies several signs and signals that served as coded instructions to runaways.  Discuss these symbols and their meanings.

21. When Mary and Gertie attempt their escape, Gertie tells Mary to find the Quaker Meeting House.  Discuss the role the Quakers played in the Underground Railroad.

Peter Troy is a former high school history teacher from New York. He is at work on his next novel.

Howard Bahr, The Judas Field; Peter Behrens, The O’Briens; E. L. Doctorow, The March; Kathleen Grissom, The Kitchen House; Robert Hicks, A Separate Country, The Widow of the South; Valerie Martin, Property; Jonathan Odell, The Healing; Edward Rutherfurd, New York, The Rebels of Ireland.
Learn More About May the Road Rise Up to Meet You
print

Enchantments
Back to Top