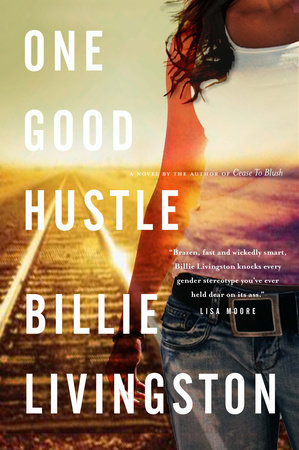 1. In the novel, Sammie thinks about the church, Christianity and the Bible fairly often, even though she herself seems ambivalent about the existence of God. Discuss the meaning behind the presence of Christianity in the novel. What does Sammie find so appealing about the church? Why is she embarrassed about her time spent there when she discusses it with her father?

2. Even though Sammie loves and feels a connection to her parents (as evidenced by the way she frequently defends and protects them), she refers to them by their first names. What does this say about her relationship with them? Is she attempting to distance herself from them? Was this something they themselves encouraged?

3. Ruby adopts Sammie into her home after hearing about Sammie’s life with her mother. She looks after and feeds Sammie, but at times she seems to attack Sammie’s appearance and her mother. Is Ruby a good influence in Sammie’s life? Is she understanding and compassionate or is she closed-minded and inconsiderate?

4. Sammie and Drew’s relationship, by the end of the novel, seems uncertain, with their last encounter ending on an ambivalent note. Do you think Sammie will see Drew again? Will she attempt to pursue a relationship with him, and would that be a good idea for her?

5. Sammie’s interactions with men are often negative or frightening. Is it possible for Sammie to have a positive interaction with any man? When George, Sammie’s landlord, corners her in her apartment, do you think he was behaving inappropriately? Was she right in perceiving a threat?

6. At several points in the novel, Sammie thinks about her appearance, or wishes she looked different. Why is appearance so important to her? What sort of appearance does she wish to project? How do other characters perceive her?

8. Jill regards the loss of her virginity as something that was extremely upsetting, as though it had been taken from her, while Sammie seems to regard the situation as something Jill brought on herself. Discuss this complicated issue.

9. We find out late in the book that Sammie blames herself for her family falling apart. Why would she believe herself to be responsible?

11. Sammie spends a good portion of the novel lamenting her situation and believing that a few simple fixes – a change in location, a change of appearance, money – could bring peace back to her life. Why does she believe simple fixes can solve big problems? Does she understand the scope of the problems she faces? What could actually bring peace to Sammie’s life?

12. By the end of the book, what sort of changes has Sammie experienced? Has she found any kind of peace?

13. A recurring theme of the novel is what it means to be a good person and a bad person, and how our morals define us. Sammie believes that she and her family are bad, but she will often attempt to justify past hustles by painting their victims as “asking for it” or that they otherwise deserved it. Is this part of her struggle to become a good person? Does she truly believe herself when she says this?

15. Sammie’s attempts to keep Drew from her family fail when she asks for his help in finding her mother. Soon after, she cuts off all contact with him. Why does she stop talking to him? Why, later in the book, does she let him back into her life?

16. Why is it so important for Sammie to hold her mother’s gaze at the end of the book?

Kill Me If You Can
Max Allan Collins and Mickey Spillane

Diamond and the Eye
Peter Lovesey

Murder on the Vine
Camilla Trinchieri

From the Shadows
James R. Benn

Other People’s Secrets
Meredith Hambrock
Back to Top