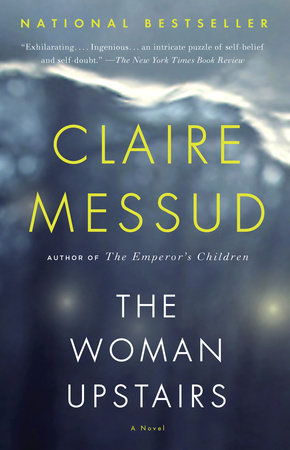 The novel opens with a furious self-introduction by the narrator, Nora Eldridge, an elementary school teacher in Cambridge, Massachusetts. “How angry am I? You don’t want to know. Nobody wants to know about that” (p. 3). Just past forty now, she has led the life of a good girl and good daughter, a good teacher who’s good with the kids but not always so good with herself. She has become “the woman upstairs”: quiet, polite, smiling, causing no trouble. But now she is furious. She wants to set the world on fire. The journey that brought her to this point unfolds as the novel moves forward.

The trouble begins with what at first appears to be a godsend: the arrival in Cambridge of the Shahid family from Paris. Seven-year-old Reza, an enchanting boy, joins her class, and soon Nora meets his charming, sophisticated parents: Skandar, a visiting scholar at Harvard, and Sirena, an installation artist on the cusp of international fame. Nora falls in love with all of them, both separately and together, and in the process oversteps the boundaries she has so carefully created for herself. When Reza is attacked by schoolyard bullies, Nora is drawn deep into the family’s complex and alluring world.

Nora’s growing friendship with Sirena also reawakens her own artistic ambitions, which were largely abandoned when she became a teacher. Sirena is working on a new sculptural and video-based installation called Wonderland, based in part on the dream-world into which Lewis Carroll’s Alice descends, to premier at a major show in Paris. Fueled by Sirena’s vision and creativity, Nora dives into her own project: small-scale dioramas of the rooms of four different female artists, each radical in her own way. Working with Sirena, working on her art, Nora feels fully alive, energized and inspired. “I was awake in my life in a way completely new to me,” she says, “and I knew that anything  . . . was possible” (p. 142). But this moment of exaltation is short-lived; Nora’s relationship with the Shahids becomes more dependent, more complicated—and more and more fascinating for the reader, right up to the surprising, shattering conclusion.

Emotionally and intellectually complex, The Woman Upstairs offers a fresh take on the themes of appearance and reality; deception and betrayal; identity, self-expression and exploration. And the novel paints a vivid and unflinching portrait of a woman on the verge, one who is finally ready, as she says, to set the world on fire as she grasps at a last chance for happiness.

1. Note Claire Messud’s epigraphs for the novel—quotes from some very persuasive, and very powerful, male writers. How do these words set up expectations for the reader? How do these choices look to you upon finishing The Woman Upstairs? And what about the other male writers (such as Dostoyevsky and Chekhov) whose work is alluded to in Messud’s text? Do they reveal anything about the author’s own understanding of Nora’s reliability, sense of self and potential literary legacy?

2. Nora introduces herself by saying: “My name is Nora Marie Eldridge and I’m forty-two years old. . . . Until last summer, I taught third grade at Appleton Elementary School in Cambridge, Massachusetts, and maybe I’ll go back and do it again, I just don’t know. Maybe, instead, I’ll set the world on fire. I just might” (p. 5). Which choice seems more likely for Nora? How might she set the world on fire? Is the book itself an act of revenge?

3. At the beginning of the novel, Nora says: “I’ve finally come to understand that life itself is the Fun House. All you want is that door marked EXIT, the escape to a place where Real Life will be; and you can never find it” [p. 4]. Why does Nora feel that life is a Fun House? What does the Fun House represent for her? Why does she feel it’s impossible to escape? Why is Nora so drawn to each of the Shahids? What do they seem to offer her, and how do her memories inform her attraction to them?

4. What does Nora mean when she describes herself as “the woman upstairs”? What are the chief attributes of this archetype?

5. Nora asks, “How did all that revolutionary talk of the seventies land us in place where being female means playing dumb and looking good?” (p. 4). In what ways can The Woman Upstairs be read as a feminist novel? Which aspects of women’s experience does the novel illuminate?

6. Nora might be described as a self-conscious narrator. At the beginning of Chapter 7, she writes: “There was another strand in this tapestry. What does it signify that I am loath to tell you, slow to tell you?” (p. 148). What effect is created by Nora’s direct addresses to the reader and her self-questioning? How does Nora want her readers to see her? Does this honesty make her more of a reliable narrator, or does it trigger the reader to be more skeptical of her storytelling—including her observations and her claims?

8. Earlier in the novel, she writes that hunger is “the source of almost every sorrow” (p. 46). Is hunger at the root of her own pain? Nora understands that “the great dilemma” of her mother’s life “had been to glimpse freedom too late, at too high a price” (p. 40). Does Nora reenact her mother’s failed ambitions or go beyond them? Why did Nora give up the artist’s life and become first a management consultant and then an elementary school teacher?

9. Why does Nora choose Emily Dickinson, Virginia Woolf, Alice Neel and Edie Sedgwick as subjects for her dioramas? In what ways does she identify with, yet try to distinguish herself from, these particular writers and artists?

10. The ending of The Woman Upstairs delivers a tremendous shock to Nora and to the reader. Were there hints and warnings that a betrayal was coming? Why wasn’t Nora more wary of her involvement with the Shahids? What may have motivated Sirena to treat Nora as she does?

11. Early in the novel, Nora writes: “I’m not crazy. Angry, yes; crazy, no” (p. 5). But later she suggests that if someone else told her story to her, she’d conclude they were either crazy or a child. How is the reader to understand her mental and emotional state?

12. After visiting Sirena’s Wonderland exhibit in Paris, Nora writes: “How could I begin to explain what it meant . . . the great rippling outrage of what it meant—about each of us, about myself perhaps most of all, about the lies I’d persistently told myself these many years” (p. 252). What does the betrayal Nora suffers mean for each of them? What lies has she told herself?

13. It becomes clear by the end of the novel that Sirena was using Nora. Is Nora purely a victim of Sirena’s ruthlessness? To what extent does Nora make herself vulnerable to such humiliation? Was she also using Sirena for her own purposes?

14. Look again at the ferocious opening pages of the novel and at Nora’s self-description, written after the events the novel describes have already transpired. How has she been transformed by her experience with the Shahids? Has the experience, as painful as it was, been good for her in any way?

Claire Messud’s most recent novel, The Emperor’s Children, was a New York Times, Los Angeles Times and Washington Post Best Book of the Year. Her first novel, When the World Was Steady, and her book of novellas, The Hunters, were both finalists for the PEN/Faulkner Award; her second novel, The Last Life, was a Publishers Weekly Best Book of the Year and Editor’s Choice at The Village Voice. All four of her books were named New York Times Notable Books of the Year. Messud has been awarded Guggenheim Fellowship and Radcliffe Fellowships and the Strauss Living Award from the American Academy of Arts and Letters. She lives in Cambridge, Massachusetts, with her husband and children.
Learn More About The Woman Upstairs
print

Among the Ten Thousand Things
Back to Top