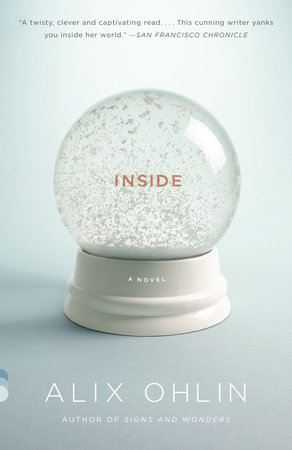 The introduction, discussion questions, and suggested further reading that follow are designed to enhance your group’s discussion of Alix Ohlin’s emotionally powerful new novel Inside.

Alix Olin’s Inside gives readers a novel of extraordinary depth and complexity. Following the intertwined lives of several sets of characters, Inside explores the often hidden inner life and the many ways it radiates into the external world.

The novel begins as Grace, a psychotherapist, is out skiing when she stumbles upon a man lying in the snow. The man, named Tug, has fallen after a failed suicide attempt. Grace helps him to the hospital and then is increasingly, irresistibly drawn into a relationship with him, driven by the desire to help him and to unravel the mystery of who he really is. Tug keeps his own inner life safely out of reach, barely sharing the mere facts of his past, and certainly not revealing the reasons for his suicide attempt. He is a riddle Grace is determined to solve.

Inside shifts between different time periods, settings, and characters, exploring their increasingly complex relationships and interrelationships. Throughout the novel, the theme of helping others—or of trying and often failing to help others—appears again and again. Grace tries to rescue Tug from his despair and the posttraumatic stress he suffers after witnessing atrocities in Rwanda. She also tries to help her clients, one of whom, a teenager named Anne, runs away to New York and becomes an actress. With little money or stability of her own, Anne takes in two other runaways, Hilary and Alan, virtually turning over her East Village apartment to a pair of strangers. Mitch, Grace’s ex-husband and himself a therapist, is drawn into a relationship with Martine, partly drawn by the desire to help her autistic son. But when that proves too draining, he heads off to work with a struggling native community in Alaska, where he tries to help Thomasie, a young Inuit man whose mother lies in a coma after falling asleep drunk in the snow with her daughter. Later in the novel, Mitch will help Grace recover after she suffers a car accident.

Ohlin delves into the inner lives of each of these characters with extraordinary sensitivity and skill, revealing their motivations, their fears and vulnerabilities, and the strategies they’ve adopted to cope with their pain. Again and again, she shows how these people push up against the limits of their ability to help or be helped. She explores, as well, the many ways people choose to hide, disappear, or walk away from each other.

And yet the novel—unflinchingly honest about the ways in which our attempts to help others often fail or prove disastrous—is ultimately hopeful. As Ohlin writes near the end of the book: “Witnessing the pain of others is the very least you can do in this world. It’s how you know that when your own turn comes, someone will be there with you” (p. 252). The novel itself asks readers to bear witness to the pain of others, a request that is amply rewarded by the remarkable insight it offers into the human condition, and by the sheer pleasure of great storytelling.

1. In what ways does the novel unfold the significance of its title? In what ways is it about the inner life?

2. What threads run throughout the novel? In what multiple ways are all the major characters interconnected? What important experiences do they share?

4. In what ways is this a novel about the desire to help others (or to rescue them) and the limits of this desire? Which other characters take on the role of helper? What are the consequences of their efforts?

5. Why does Anne run away from home? How is Hilary able to tell that she’s a runaway like herself?

6. After she is attacked in Edinburgh, Anne decides to keep the experience from her fellow actors and feels “the secret high that came from thinking none of them knew her at all” [p. 131]. Tug keeps his inner life “hidden behind a curtain, on a secret stage” [p. 165]. In what ways do the characters in Inside both reveal and conceal their inner lives? What does the novel ultimately suggest about one person’s ability to truly know another?

7. After Tug tells Grace about his traumatic experiences in Rwanda, the terrible violence and suffering he witnessed there, he says: “You can tell people your story, or any terrible story, and it doesn’t make any difference. Things just keep happening over and over again” (p. 186). Is Tug right about this? Does telling one’s story have no healing effects?

8. What is the effect of the novel’s shifting back and forth between characters, time periods, and places?

9. Mitch right to blame himself for not helping Thomasie more? Why doesn’t he follow through on his offer to help? What more might he have done?

10. Like most of the characters in Inside, Anne is complicated, her motivations often mysterious. Why does she let the runaways stay in her apartment? Why does she give all her money to Hilary after her success as an actress? Why doesn’t she stop to talk to Grace when she passes her in the park?

12. Grace thinks about all her patients who wanted to be told what to do, and how they didn’t want to hear it when she said they had to be responsible for their own lives. “What was worse than having to take responsibility for everything you did or felt or said? For the way your actions radiated out to change not just your own life, but those of the people around you?” (p. 240). Why is that such a daunting responsibility? In what ways do the actions, feelings, and speech of the characters radiate out to change others as well as themselves?

13. In what ways does Inside reflect, with remarkable accuracy, the emotional contours of contemporary life in what Tug calls the “comfortable nations”?

14. The last word of the novel echoes its title, as Anne invites Mitch “inside” (p. 258). What are the implications of the novel’s ending? Will Anne and Mitch get back together? If they do, how might their new relationship differ from their marriage?

Alix Ohlin is the author of The Missing Person, a novel, and Babylon and Other Stories. Her work has appeared in Best American Short Stories, Best New American Voices, and on NPR’s Selected Shorts. Born and raised in Montreal, she teaches at Lafayette College and in the Warren Wilson Program for Writers.

Why the Tree Loves the Ax
Back to Top