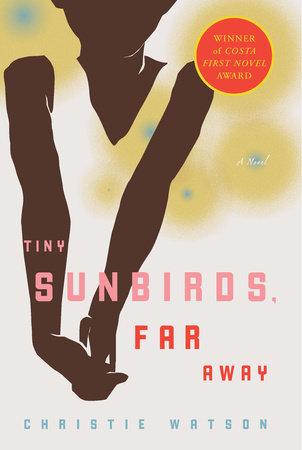 1. Ezikiel and Blessing share a special sibling bond. How did it change when they moved from Lagos to Warri? Do you think there was anything that Blessing could have done to save Ezikiel?

2. Blessing tells her story in her own distinct voice. How would you characterize her style as a narrator? Discuss Blessing’s development from an unsure, shy girl to a confident young woman. How does each character in the novel encourage–or stifle–Blessing’s maturation?

3. Watson originally tried writing Tiny Sunbirds, Far Away from the perspective of Dan, the white oil worker. How would Dan’s perspective have changed the book? What insights might his narration have brought to the novel? What limitations might Watson have faced?

4. From the very first line of the novel, “Father was a loud man,” it’s clear that her father is of crucial importance to Blessing. How does her opinion of him change throughout the story? How does her relationship with him affect her relationships with the other men in her life?

5. Discuss the power of the women in Tiny Sunbirds, Far Away (Grandma’s rally) versus the power of men in the novel (Alhaji, the Sibeye Boys). How does the expression of power differ between the genders?

6. It’s estimated that three million girls are at risk of female genital mutilation in Africa. Discuss Grandma’s choice to perform the practice. How does it inform Blessing’s own career as a midwife? How do Grandma and Blessing determine where to draw the line between ethical responsibility and cultural tradition?

7. Legend and tradition play significant roles in Blessing’s family–from Grandma’s stories to Alhaji’s disbelief in Ezikiel’s medical condition. How are religion, education, and tradition balanced in the novel? Do they coexist? When and why do they clash?

8. Though foreign companies and Nigeria’s own government gain enormous wealth from the oil industry, the majority of people residing in the oil producing regions of the country continue to live in extreme poverty. How does the presence of the oil industry impact the lives of the characters in the novel? Does Watson offer any hints as to what could be done to better the situation?

A Conversation with Christie Watson…

Q: Where did your inspiration for the character of Blessing come from?

A: I began writing Tiny Sunbirds, Far Away from the point of view of Dan, the white oil worker, but something wasn’t working properly. I had no idea how to get into his head and imagine his thoughts. After experimenting with a few different points of view I tried writing from a young girl’s, and everything flowed. I thought of my own daughter, who uses language in a certain, and sometimes nonsensical, way and suddenly, Blessing was born. The inspiration for her voice came from my daughter, but really how she felt as a young girl trapped by circumstance and not really belonging, was based on my own experiences.

Q: Your upbringing was very different from Blessing’s. Are parts of her character or her familial relationships based on your own experiences?

A: On the surface my upbringing was very different from Blessing’s. But we share a lot of experiences in common. I grew up in a very working-class family, on a council estate surrounded by poverty and violence. When I met my partner and his family in Nigeria, at first everything was strange and difficult to cope with, but as I became used to the differences between us, I fell in love with them and with Nigeria, and found a sense of belonging that I’d never experienced before. I draw on all my experiences to inform my fiction, and luckily, with my interesting families, and colorful characters within, I don’t have to look far to find inspiration. My father-in-law, for example, has a mosque in his garden and has talked for years of starting a snail farm. From a character point of view, Blessing is very much like my Nigerian stepdaughter, who is also wonderful, intuitive, intelligent.

Q: The perspective of Tiny Sunbirds, Far Away creates a great sense of intimacy between Blessing and the reader. When you finished writing the novel, did you miss her?

A: I originally wrote the entire novel in third person and got to the end and realized that the distance between reader and writer was too great, because the distance between me and Blessing was too great. So I wrote the whole thing again in first-person point of view and everything changed. Suddenly I lived, breathed, and slept as Blessing. I imagined the characters all around me, and even dreamed in the fictional world I’d created, which was strange and wonderful at the same time. I called my  daughter Blessing on more than one occasion. So when the writing came to an end, of course, I cried. The characters followed me around for a few weeks, as if they too didn’t want to leave. I miss them even now.

Q: You tackle a variety of contemporary issues throughout the book including oil drilling, genital mutilation, and children as rebel soldiers. Do you think of your novel as having a social conscience?

A: My politics come first, writing second. I write (and read) in order to understand the world, and myself. I think of all my writing as having a social conscience. The idea for the novel came from extended family members describing their experiences to me of female circumcision (as they call female genital mutilation). But although my novel deals with some terrible realities, I hope that my writing reflects balance: there is beauty and horror, light and dark. I try to add humor in order to make the dark scenes easier to read. I wanted to write a novel about life and difficult issues in contemporary Nigeria, without resorting to negative stereotypes of a fictional Africa that is so often presented in the West.

I did worry about my “right to write” this novel. It was only after encouragement from my Nigerian family and friends that I found the courage. I was terrified of presenting a negative Western view of “Africa” as a place of nothing but famine, disease, and war. I really hope that by presenting the reality of the Nigeria I know–one of difficulties but also humor, culture, middle classes, parties, and incredible family units, as well as the differences between rich and poor, traditional and modern–that I’ve managed to avoid stereotype or prejudice. I wanted to show Western readers what family really means in Nigeria, in the face of the extreme injustice in the Niger Delta caused by the Western oil companies. Chimamanda Adichie recently gave a brilliant lecture about the dangers of reducing a people to a single story. I hope that my version of Nigeria is not one thing or another, but balanced, and I hope that my story of the Niger Delta becomes one of many.

If you enjoyed Tiny Sunbirds, Far Away, try one of these books next!

GraceLand by Chris Abani
The coming-of-age story of young Elvis Oke, named for the American rock-and-roll star, in 1970s Nigeria.

Things Fall Apart by Chinua Achebe
This classic and widely read novel examines European colonization in the late nineteenth century within a small community in Nigeria.

Changes: A Love Story by Ama Ata Aidoo
A woman’s decision to divorce her husband and marry into a polygamous relationship sheds light on women’s issues in Ghana, as well as around the world.

The Smell of Aples by Marc Behr
The story of a young son of an army general in apartheid South Africa.

Little Bee by Chris Cleave
The lives of Nigerian orphan Little Bee and a wealthy British couple intersect during a horrible crime and are forever intertwined.

Don’t Let’s Go to the Dogs Tonight by Alexandra Fuller
Born in England, Fuller was raised in Rhodesia (current-day Zimbabwe), and her childhood there is the subject of her memoir.

Waiting for an Angel by Helon Habila
Habila’s debut tells the story of a young journalist living amid the chaos of Lagos, Nigeria.

Mister Pip by Lloyd Jones
A teacher in Bougainville connects with his students through Charles Dickens’s Great Expectations.

The Boy Who Harnessed the Wind by William Kamkwamba
Kamkwamba’s memoir relates his childhood in famine-stricken Malawi and his determined attempt to make for his village what he thought it most needed: a windmill.

The Birth House by Ami McKay
Local traditions and modern medicine clash in this novel about a doctor’s practice in World War I-era Nova Scotia.

Efuru by Flora Nwapa
The first book published in Nigeria by a native woman, Efuru is an intimate story that explores village life and tradition.

Cutting for Stone by Abraham Verghese
Physician Verghese tells the story of Ethiopian twins, born from a scandalous union between an Indian nun and a British surgeon, who come of age as Ethiopia teeters on the brink of revolution.
Learn More About Tiny Sunbirds, Far Away
print

Flirting with the Beast
Jane Porter

Every Summer After
Carley Fortune

Aesthetica
Allie Rowbottom
Back to Top