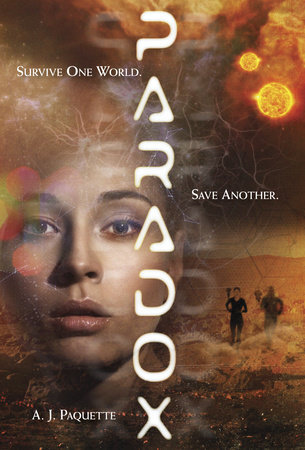 By A. J. Paquette

By A. J. Paquette

Fans of James Dashner’s Maze Runner series will love this postapocalyptic adventure about a girl who must survive an alien planet in order to save the Earth.

Ana only knows her name because of the tag she finds pinned to her jumpsuit. Waking in the featureless compartment of a rocket ship, she opens the hatch to discover that she has landed on a barren alien world. Instructions in her pocket tell her to observe and to survive, no doubt with help from the wicked-looking knives she carries on her belt. But to what purpose?

Meeting up with three other teens–one boy seems strangely familiar–Ana treks across the inhospitable landscape, occasionally encountering odd twists of light that carry glimpses of people back on Earth. They’re working on some sort of problem, and the situation is critical. What is the connection between Ana’s mission on this planet and the crisis back on Earth, and how is she supposed to figure out the answer when she can’t remember anything?

About A. J. Paquette

A. J. PAQUETTE is the author of the middle-grade novel Nowhere Girl, as well as several picture books for young readers. She is also a literary agent. She lives outside of Boston with her family and her very tall to-read… More about A. J. Paquette

Kirkus Reviews, April 15, 2013:
“The fate of two worlds hangs in the balance in this unorthodox science-fiction thriller.”

Booklist, June 1, 2013:
“The backstory, initially revealed through interspersed newspaper articles, presents the intriguing notion of memories as a kind of infection. The result is a delayed, but eventually worthwhile, payoff.”