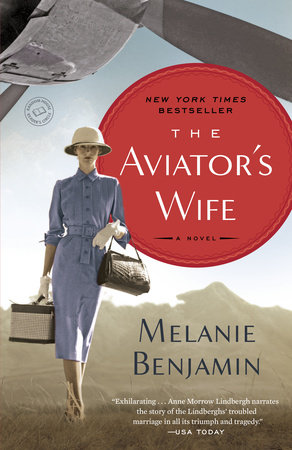 1. The  epigraph for this novel is from Antoine de Saint-Exupéry who, like Anne Morrow Lindbergh, was both a celebrated author and a noted aviator. Do you agree with his statement, “One must look with the heart”? What do you think that means? And do you think it means something different to an artist (author) as opposed to a scientist (aviator)?

2. One of the recurring themes is how Anne will choose to remember Charles. How do you think she concludes she’ll remember him by the end? How does it change?

3. Anne ’s father says, “And there’s Anne. Reliable Anne. You never change, my daughter.” (page 11)  How does Anne change over the course of this novel? Or does she?

4. How does Anne ’s nomadic lifestyle as the daughter of an ambassador later influence  her concept of “home” with Charles? What do you think defines home?

5. Anne seems to think of herself as an outsider—someone too shy and insular to make a big impression. Do you agree, or do you think Anne misevaluates herself? Do you think this insularity made Anne appealing to Charles, or do you think he was drawn to her because he saw past it? Is Charles an insular character himself, whether by nature or because he was forced into a “celebrity bubble”?

6. “Had there ever been a hero like him, in all of history?” (page 16) Anne starts her description of Charles with hero worship, comparing him to Columbus and Marco Polo. How does her opinion evolve as she comes to know him better? How did your opinion of Charles Lindbergh evolve throughout Anne’s story?

7. The title of this book is, of course, The Aviator’s Wife. Do you think that’s how Anne views herself upon marrying Charles? Do you think she sees that as a role she ’s playing, or as a defining characteristic of who she is? Does it change over the course of the book?

8. Have you ever been up in a biplane? Do you think you would ever go, even with an expert aviator at the controls?

9. Compare the relationships Anne has with the men in her life: her brother, Dwight; her father; and Charles.

11. Have you ever met someone famous? Did he/she live up to your expectations?

12. Do you think Charles and Anne were in love? Why or why not? Did that change over time?

13. Do you think you could keep the secrets that Anne keeps from her children? Why or why not?

14. What do you think flying represents to Anne? How does it compare with writing? Which do you think is more important to Anne?

15.  Do you think Charles Lindbergh was a good husband in any ways? What do you think makes for a good partner?

17. If you could ask Anne one question, what would it be?

18. How does Anne ’s relationship  with her family change after she marries Charles?

19. How would you react to the scrutiny by the press that Anne and Charles endured? Would you want to be famous if it meant being constantly under the microscope? Would you answer differently if there weren’t social media outlets but the same type of newspapers and newsreels from Anne and Charles’s lifetime?

At the Water’s Edge

The House at the Edge of Night
Back to Top