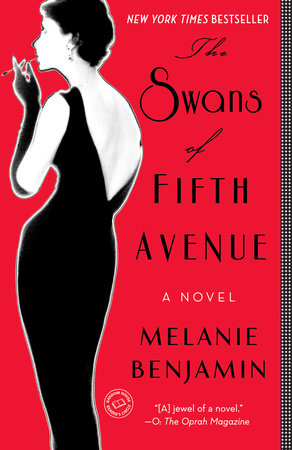 What Would Babe Do?

Since the hardcover of The Swans of Fifth Avenue was published, I’ve been asked by many readers if there was any one particular Swan who has influenced me in my own life; if there’s one I personally identify with.
I always answer that I think I identified the most with Slim Keith; her voice in the book is the most like my own. I loved her attitude, her ability to cut through the bullshit. I loved that she alone didn’t really seem to take all the trappings of wealth seriously.
But as far as who’s influenced me the most, I think I’d have to answer Babe. Because there have been several times, since writing the book, when I’ve found myself asking WWBD?
What Would Babe Do?
It came up when I was preparing for my book tour last winter. All of a sudden, my typical author wardrobe didn’t seem up to snuff: How could I go out and talk about these fabulous women wearing my usual black upon black upon more black? So I asked myself, What Would Babe Do?
Babe would purchase an entire new wardrobe. She would build it meticulously, piece by piece. She would spend days trying each piece on, combining them in different ways, looking for maximum impact. Maximum fabulousness.
It was a little hard to convince my husband that my frequent outings to Bloomingdale’s and Nordstrom were vital to my career, but ultimately, I stopped trying to convince him, asking myself once more—-
What Would Babe Do?
She’d go shopping anyway. And so I did.
When it came time to pack this fabulous wardrobe for the tour, I wrestled with the usual dilemma. Do I bring everything or pack lightly? WWBD?
She’d bring everything. So into my brand new suitcase (another result of WWBD?) everything went.
Should I pack carry–on? Resign myself to a few tiny jars of the bare minimum of toiletries—-a tube of all–purpose moisturizer, toothpaste, mouthwash—-and hope for the best? Or should I bring along my dependable arsenal, my jars and tubes of unguents and potions: the toner and concealer and night cream and day cream and wrinkle cream and eye cream, the perfume, the liquid foundation, the shampoo and conditioner and styling product, the hairspray? The hand lotion that smells like lavender?
What Would Babe Do?
In the suitcase went everything; out the window went the convenience of not having to check the bag.
Now, I know authors who can breeze through a tour with one single backpack. I have never been one of those authors, but I’ve always felt terrible about that. I’ve always suspected that I’m way more high–maintenance than most of my peers, and that isn’t a comfortable feeling. Or—-it wasn’t. Until I spent a lot of time with Babe Paley while researching and writing The Swans of Fifth -Avenue. And I realized that depending upon a ritual, finding delight in the discipline of maintenance, of pampering, of making up and dressing well, isn’t the frivolous time–waster I used to think it was.
Babe lived in a different era, an era when a hairdresser visited her every day to set, style, and spritz. A fabulous, glamorous time—-a time I sometimes long for, to tell the truth, especially when I’m jammed into an airplane protected from my seatmate by only a thin layer of yoga pant, watching fellow passengers floss their teeth or trim their nails.
Every day, after hours spent perfecting herself, Babe emerged from her home looking rested, ready, and beautiful. Every single day, even if she was just walking the dog. And it was a treat to see her, according to every account. A feast for the eyes. And for the senses.
Isn’t that lovely? That she cared enough to give that to the world? That she respected people enough to live up to their expectation of her?
I’m not saying I present such a picture, and even at my most vain, I don’t spend hours on my hair. But I do appreciate the time and consideration that Babe gave to her appearance; it’s a treat to look at all the photos of her, and marvel at such perfection, such an ornament of a different, more glamorous time.
I know I’ll never look like Babe Paley. I also know I don’t have to; I have a different canvas for my art—-the page—-whereas Babe’s only creative outlet, her only canvas, was herself. I’m the lucky one, of course.
But I also no longer feel uncomfortable about my own somewhat high–maintenance schedule; I don’t discount it as wasted time or vanity run amok. I no longer feel sheepish about not being able to travel with only a backpack and a toothbrush. Because at the end of the day, after I’ve unpacked all my unguents and potions and hung all my nice clothes and lined up all the shoes, I feel special. Cared for. By myself.
And isn’t that a nice gift? To bestow attention upon yourself, to pamper yourself?
Isn’t it a nice gift to give to everyone who happens to pass you on the street, or sit next to you on a plane, or show up at your book signing? The gift of your best, most polished self?
I think so. And that, more than anything else, is What Babe Paley Would Do.

1. The Swans have very complicated relationships with one another—-perhaps most notably, Slim and Pamela were both married to the same man. What ties these women together, despite their differences and the sometimes competitive nature of their friendships?

2. Truman is embraced wholeheartedly by the Swans when he first appears on the New York social scene. What do you think draws them to him?

4. What do you think of Truman’s relationship with fame? At times, he seems willing to sacrifice almost anything (love, his health, and his friendships) in pursuit of the limelight. How does that serve him, ultimately?

5. Why do you think Truman published “La Cote Basque 1965”? What point was he making about (or to) the story’s subjects?

7. Babe and her sisters were raised for successful marriages. Did they live up to their mother’s hopes?

9. Do you think Babe forgave Truman in the end?

10. A number of characters tell stories throughout the novel. What are some of the stories that you tell—-about yourself or about others? In what ways do stories shape our experiences?

11. Who was your favorite character? Why?

13. Aging is a prominent theme throughout the novel, as the opulent fifties come to an end and a new generation of socialites supplants the glamorous Swans. What did you think of that? How do you feel about getting older?

15. If you have read any of Melanie Benjamin’s previous books, compare and contrast this work with her earlier novels. Is this story a departure? If so, in what ways? If not, how is it in keeping with her other writing?

16. Babe always presents a very carefully composed face to the world. Only occasionally do we see that mask slip. Discuss those moments. Who is the real Babe, beneath the makeup and jewels?

18. Can you think of a woman who is the modern equivalent of Babe Paley and her circle of friends?

Learn More About The Swans of Fifth Avenue
print

Loving Frank
Back to Top