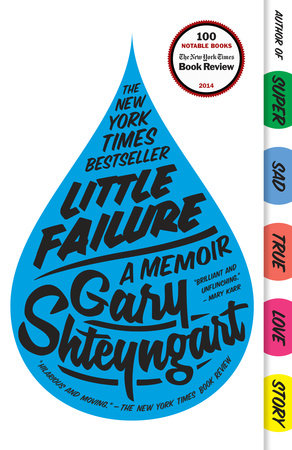 The Examined Life by Gary Shteyngart

“Why did you decide to write a memoir now?”

I’m often asked. As in, “Why not wait until you’re completely gray?” They’re talking about my relatively young age—this memoir, Little Failure, was published when I was forty-one; I always respond that forty-one is actually seventy-four in Russian years, a joke I make while clutching my beleaguered, butter-slathered heart.

But there are other reasons I decided to write Little Failure right after hopping onto the daisy path of middle age. My alcohol-and drug-related hijinks at Oberlin College notwithstanding, I can still recall in shocking high definition my strange Lenin-loving childhood in the Soviet Union—we left that country before I turned seven—and my early Reagan-loving years in the United States. The facts of my crappy Cold War existence—my parents’ doting but harsh child-rearing, the cries of “Commie!” from Queens yeshiva kids—are still potent enough to quash the sentimentality I might indulge in as an older memoirist. Sure, I hunger for youth, but not for that youth.

It is no coincidence that I began Little Failure just before becoming a father myself. Our sweet American boy was born just before my book’s publication. In writing it, I wanted to remember the best of my parents, but also to remind myself that my past did not have to be my son’s. Still, the truth is, my parents made me who I am. By the time I was nine, my father had already taught me the meaning of satire. And the mega-immigrant work ethic I inherited from my mother kept me typing away on my first novel even through the pot haze of college, when I could have been spending my time enjoying the rather frightening coed showers.

Through my teens and twenties and early thirties, I bore my parents a small but ever-percolating grudge. Like many immigrant children, I had wished them to be American parents: supportive of my writing, light on criticism of my life choices, and open-walleted. The term “little failure” was first spoken by my mother in my hundred-square-foot, water-bug-friendly Lower East Side hovel, after I informed her that I was not going to law school but would instead try to be a writer. She took one look around my apartment, which would have been considered pathetic even in the lousiest quarter of Minsk, and proclaimed: “Failurchka.”

Failurchka is how I always felt before them. “Ne kritikuete menya!” I would scream, an incorrect Russian version of “Stop criticizing me!” But how could they? It was what they knew. When I was writing Little Failure, though, something unexpected happened: My anger and incomprehension toward my parents turned to sadness—for them, for what their lives had been and hadn’t had the chance to be. My father’s first memories: hiding under the carriage of an evacuee train being bombed by the Luftwaffe; his cousin, pursued by hungry rats, jumping out of a window; and, worst of all, at age five, being told that his father had been killed during the Siege of Leningrad. When the war is over, there’s my father hiding beneath the couch, singing opera while daydreaming of going back in time to kill Hitler, thereby saving his own father’s life. And there’s my mother in the present day, constrained by fears and anxieties I could never understand, with her World War II–era photo album labeled “Uncle Simon, Wife, Murdered Children.” No Cape Cod vacation Polaroids for her.

So what could my parents make of my all-American fantasies of becoming a writer? (“But what kind of profession is this, writer?”) And until I began writing my memoir, how could I truly understand them?

Which leads to the first question a memoirist must ask: What should I hold back? Whatever one writes, and however crackerjack one’s memory, memoir is by definition an intrusion into the privacy of others. In this book I quote the poet Czesław Miłosz: “When a writer is born into a family, the family is finished,” perhaps overstating the case in a typically Eastern European way. Or not. My two favorite memoirs—Vladimir Nabokov’s Speak, Memory (Speak, Memory, published in 1951, bore that title initially only in the United Kingdom. It was titled Conclusive Evidence in the United States and Drugie Berega [Other Shores] in Nabokov’s native Russian) and Mary Karr’s The Liars’ Club—are as different as can be. The first is a celebration of a family whose world falls apart; the second, the story of a family that itself falls apart.

In the end, I held back almost nothing. I wanted to write with all the sickening honesty that could be brought to bear upon the subject. My parents raised me Russian in America, in the tried-and-true immigrant way, and I realized that, to American eyes and ears, the belittlement and the thwacks on the head I endured would come across as injustices. But to most readers from my background, they would be just the familiar artifacts of our cross-cultural reality.

Eventually, my parents reconciled themselves to my career, and now they are proud of me. The actor Oliver Platt, introducing me at a reading in New York, called my memoir “a difficult love letter to your parents,” and that is exactly how I hoped it would be read. Because without the difficult part there can be no love, only blind adoration and obedience, a commandment instructing one to “love thy parents.” The real, uncoerced love is bumpy, painful, and often unwieldy. It is too big for this essay. It is too big even for a book titled Little Failure.

Originally published in the July 2014 issue of O: The Oprah Magazine

1. What do you make of Gary’s dedication? If you wrote a memoir, would you dedicate it to your shrink as well?

2. Why does the book begin where it does? Discuss the importance of the Chesme Church for Gary. Was there a building in your childhood that messed up your life forever?

3. Little Failure is sprinkled with non-English words. Do you think immigrants like Gary should just stick to English and basta with the foreign words already? Try to use some of your newly learned Russian curse words with a Russian speaker. Discuss what happens next.

4. Gary was born in 1972. Do you think he’s too young to write a memoir? Why should only old people and former astronauts be allowed to write memoirs?

5. Did the photos change your reading experience or how you were imagining Gary and his family? Is he more or less geeky than you would picture him from his words alone? Would you have taken Gary to your senior prom? Discuss why not.

6. Did reading this book change the way you view Gary’s novels? Is it easier or harder to laugh at misfortune when you know it actually happened?

7. Can you imagine how Gary’s life might have been different without his early passion for writing? Try to imagine Gary as a very unsuccessful lawyer you meet at a bar. What would you say to him if he put his arm on your shoulder?

9. Food carries a lot of literal and symbolic weight for Gary. What food in your life has the most emotional baggage? As an exercise, try eating a pound of farmer’s cheese covered in canned peaches. How do you feel? Not so good, right?

10. How and when did your family come to the United States? Why didn’t any of them write a memoir? It’s not that hard. Maybe they were too busy actually working.

11. Gary describes his family’s life in Queens as “middle-middle-middle class.” Do you agree? In what ways did you see the American
class system affect the Shteyngarts? Why do immigrant parents often hold conservative views while their kids are raging secular progressives?

12. Was there a specific moment in the book when you felt that Gary truly assimilated as an American? Feel free to send Gary a hamburger care of his publisher if you think that’ll help.

13. Have Gary’s parents achieved the American dream? Has Gary? Have you?

14. Discuss some of the larger forces at play in Little Failure: Judaism, psychoanalysis, drugs and alcohol. Which one worked out best for Gary?

16. What did the return trip to Russia do for the Shteyngarts, for Gary, and for the book as a whole? Should one try to dig up one’s own past or just sail ahead blindly into the future blasting eighties rock into one’s eardrums in an attempt to block out the pain?

Time to Be in Earnest
Back to Top