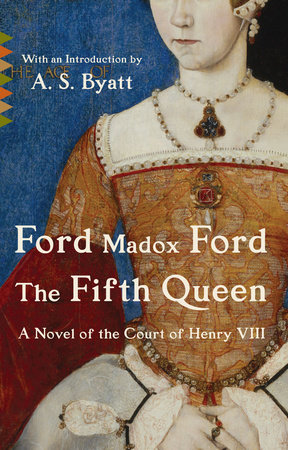 Melding fact and fiction, Ford Madox Ford offers a richly imagined portrait of Katharine Howard, the fifth wife of Henry VIII. The topics for discussion, questions, and suggestions for further reading that follow are designed to help your reading group explore Katharine’s role in
the political and religious turmoil that make Henry’s reign one of the most intriguing periods in history.

Katharine wed Henry VIII when he was forty-nine, more than three decades her senior.  She was regarded with suspicion and disdain by many of her contemporaries: Her adherence to the “old faith” (Catholicism) displeased the recently empowered Protestant elite and her reputation as a wild, sexually experienced woman inspired vicious gossip in the royal court and beyond. Nor has history been kind: in books, movies, and television programs about Henry and his wives, she is most often depicted as uneducated, foolish, and promiscuous.

Ford’s trilogy, which follows Katharine from her first meeting with the king to her tragic end, presents her in a far different light. Ford portrays Katharine as a virtuous young woman schooled in the classics and well aware of the motivations, honorable and corrupt, that propel people’s actions. At Henry’s court her strengths and her virtues are challenged by powerful men, from the king himself to the ambitious Thomas Cromwell, Lord Privy Seal, the consummate schemer, Throckmorton, the opportunistic Archbishop Cranmer, and their many spies and emissaries, some with secret agendas of their own. Katharine’s story, set against the vivid backdrop of sixteenth-century England, captures the mood and the customs of the times in glorious detail and illuminates the timeless impact of love and betrayal, fear and fanaticism on the human drama.

2. Is Cromwell primarily driven by religious convictions, patriotism, or personal ambition? What missteps lead to his downfall? To what extent is his ruin attributable to his flawed assumptions about England and its position in the world, to the treachery of others, to faults in his character?

3. Throckmorton proclaims his allegiance to—and even love for—Katharine on several occasions (pp. 146-155, 224-231, 350-351, for example). Why is winning Katharine’s trust and reestablishing the Roman Catholic Church in England so important to him? What is the significance of Katharine’s refusal to expose Throckmorton’s plot to Cromwell although “with her woman’s instinct she felt that the man about to die [Cromwell] was a better man, though he was her foe” (p. 305)?

4. How fully does Katharine understand the political implications of the religious upheavals in England? How does her family history influence her opinions? Does Cromwell’s fall deepen her awareness of what is at stake?

5. At what points does Katharine assert her independence? What enables her to stand up for her choices?  How do the classic writings of Greece and Rome, as well as Church teachings, shape her thinking and sense of morality?

6. In what respects is The Fifth Queen a traditional love story? Does the attraction between Henry and Katharine develop in a realistic way? How do Henry’s reaction to Katharine’s performance as Persephone (pp. 140-142); their conversations in Lady Mary’s room (pp.200-202) and at the stables (p. 236); and other encounters lay the groundwork for Henry’s proposal (p. 344)? Why does Katharine insist on talking to Anne of Cleves before they marry—and why does Henry does he consent to it (pp. 338-339)?  In what ways do the issues of gender and power the couple contends with mirror the patterns of romantic relationships in general (pp. 448, 457-458)?  Do you think they feel genuine love for each other?

7. Katharine declares “I am not made for courts . . . I will get me gone to Calais . . . and then to nunnery. I am not for this world” (pp. 232-233). After Henry’s proposal, she acknowledges that “she itched to be Queen—on the morrow or the next day; she desired to have the king for her own, to wear fair gowns and a crown; to be beloved of the poor people and beloved of the saints” (pp. 351-352). What do these contradictory statements reveal about Katharine? Do her mixed feelings reflect not only her unique situation, but also common adolescent emotions?

8. Katharine is ultimately undone by rumors about her past, particularly her history with Thomas Culpepper, her handsome, impulsive cousin.  Do Culpepper’s behavior (pp. 50, 112, 335-336, 545-549) and Katharine’s thoughts and actions regarding him (pp. 53, 352, 417), as well as her description of her childhood (p. 502), give credence to the gossip?  Katharine’s enemies Norfolk and Lascelles, her companion Margot Poins, and Mary Hall, a friend from childhood, are among those who help to tarnish her reputation. Are Norfolk and Lascelles acting for the good of their country or are they motivated by greed and self-interest? Are Margot’s and Mary’s betrayals in any way more forgivable?

9. Refusing to retract her confession despite the king’s pleadings, Katharine says, “[T]oday you would save me; to-morrow a foul speech of one mine enemy shall gird you again to slay me . . . I am not one to let my name be bandied about for many days in the mouths of men. I had rather be called a sinner, adjudged and dead and forgotten” (pp. 603-604).  How do her words amplify the fervor, the confidence, and perhaps the foolhardiness Katharine demonstrates throughout the story?

10. What role does Magister Udal play in the novels? Does his lecherous nature make him a figure of fun and an object of mockery—or do his expert skills as a Latinist and writer evoke respect and admiration?

11. From Anne of Cleves to Cicely Elliott and Margot Poins, the novels present a diverse array of female characters who affect the fates of the major characters. To what extent are the lives of women—from queens to servingwomen—defined by social tradition and the limitations imposed on them by men? What examples are there of  women using their intelligence, cunning, or sexual power to influence events?

12. One of the most interesting relationships in the novels is the one between Lady Mary and Katharine. Is Mary’s anger and implacability justified by the horror of her mother’s fate and her own situation in the aftermath (p. 60)? What does her treatment of her maids (p. 116), her reaction to Henry’s conciliatory overtures (pp. 194-195), and her antipathy toward Edward (p. 460) demonstrate about her character? Is she to some extent responsible for her own unhappiness and isolation?

13. In what ways are Mary and Katharine similar? How important is religious faith and family loyalty in their lives? How much do their fates depend on the whims of the king?  Does Mary have a better sense of Henry’s powers and vulnerabilities than Katharine does?

14. The novels take place during a time of  political unrest, religious upheavals, and sweeping social change.  How did the English Reformation (England’s break with the  Roman Catholic Church) alter the traditional class structure and the balance of power and prestige that had existed earlier? In what ways does this period represent the movement of England and Europe away from the romantic, chivalrous past into the modern era? How does Ford incorporate intellectual and political trends and historical developments (the printing press and the translation of the Bible into English, for example) to capture the immensity and the complexities of the transformation?

15. The Fifth Queen trilogy re-creates the many conspiracies surrounding Henry VIII, including the convoluted plots of Thomas Cromwell, Thockmorton, Bishop Gardiner and Archbishop Cranmer, and their followers. What insights do the dissention and antagonisms depicted provide into the impact of religious and political movements on national and international affairs?  Are there parallels to our own times?

16. Discuss the balance of historical accuracy and authorial invention in The Fifth Queen. What expectations does the reader have about the reliability of the representations of characters and events in historical fiction? Do Ford’s portraits of Henry VIII, Thomas Cromwell, and the other historical figures differ from impressions you have from other works about the period? Why do you think Ford chose to deviate from the customary view of Katharine?

17. Present-day readers, as well as Ford’s early-twentieth-century audience, particularly Americans, may not be familiar with the historical setting of The Fifth Queen trilogy. What techniques does Ford use to help clarify the politics, structure of society, and the complex relationships among rulers covered in the novels? How do his language, touches of humor, and vivid descriptions of everything from fashions to palace decor to the countryside contribute to the reader’s comprehension and appreciation of time and place?

18. In the introduction A. S. Byatt cites Ford’s admiration for “Stendahl, Maupassant, and above all Flaubert” (p. viii). If you are familiar with these writers, what parallels do you see between their works and The Fifth Queen?

Ford Madox Ford (1873-1939) was the author of more than eighty books, including the novel The Good Solider and the tetralogy Parade’s End, several volumes of autobiography, and a book of criticism, The March of Literature.  Born in England, he moved to Paris in 1922 and in his later years divided his time between France and America.

Gretel and the Dark

The Book of Fires
Back to Top