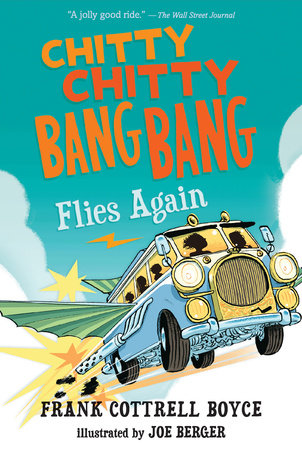 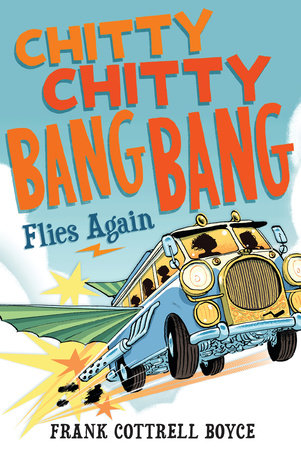 Buckle your seatbelt for the first-ever follow-up to Ian Fleming’s only children’s story! Fueled by wry humor, this much-anticipated sequel to the children’s classic — featuring a contemporary family and a camper van with a mind of her own — is driven by best-selling, award-winning author Frank Cottrell Boyce and revved up by Joe Berger’s captivating black-and-white illustrations.

Buckle your seatbelt for the first-ever follow up to Ian Fleming’s only children’s story.

When the Tooting family finds an old engine and fits it to their camper van, they have no idea what kind of adventure lies ahead. The engine used to belong to an extraordinary car . . . and it wants its bodywork back! But as the Tootings hurtle across the world rebuilding the original Chitty, a sinister baddie is on their trail — one who will stop at nothing to get the magnificent car for himself.

Fueled by wry humor , this much-anticipated sequel to the children’s classic by Ian Fleming, creator of James Bond — fe aturing a contemporary family and a camper van with a mind of its own — is driven by best-selling, award-winning author Frank Cottrell Boyce and revved up by Joe Berger’s black-and-white illustrations. 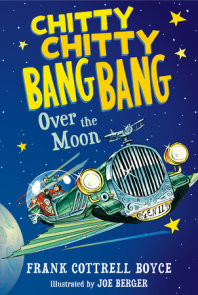 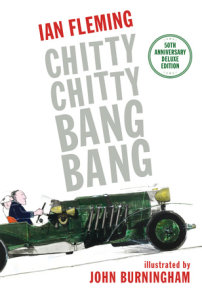 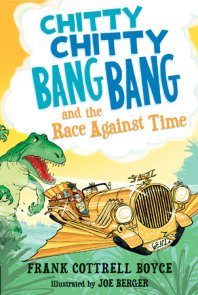 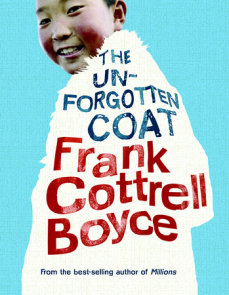 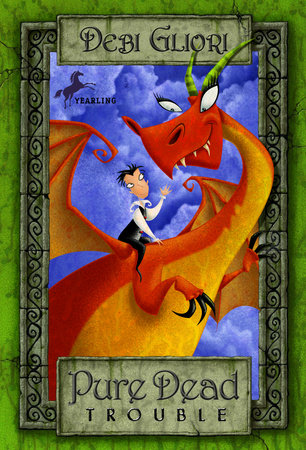 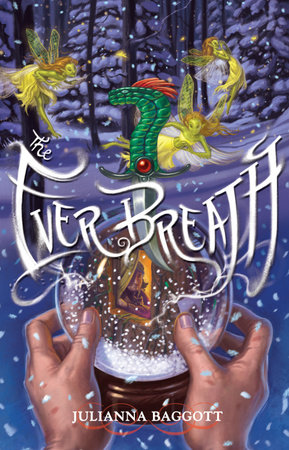 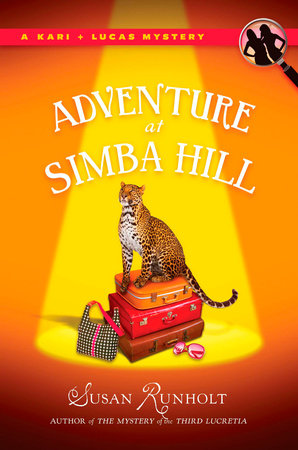 The Adventure at Simba Hill 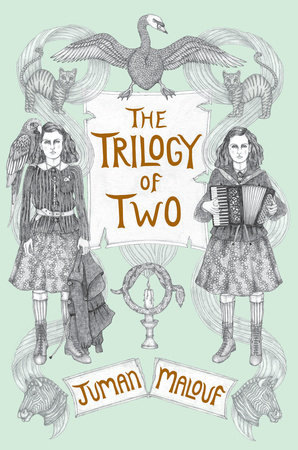 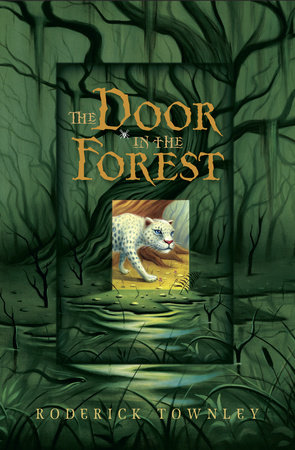 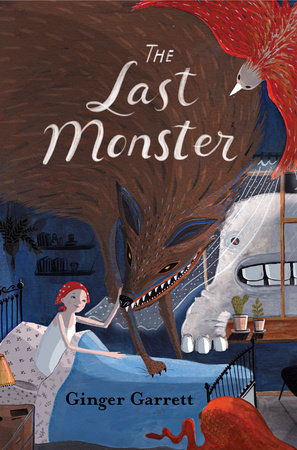 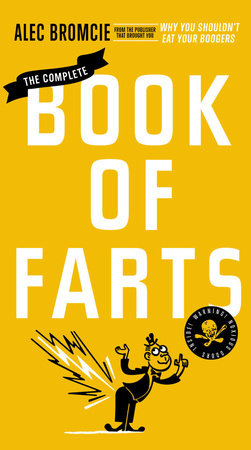 The Complete Book of Farts 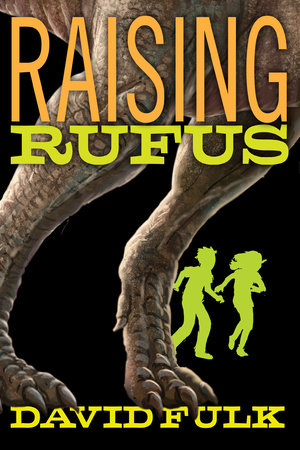 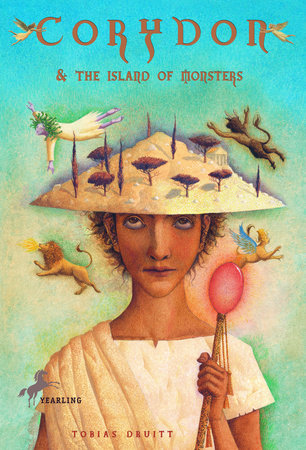 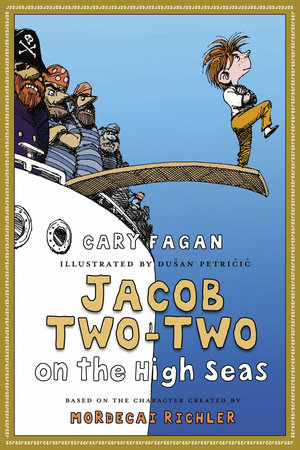 Jacob Two-Two on the High Seas

Sir Ian Fleming’s heirs, who have commissioned numerous James Bond sequels, turned to Boyce to continue Fleming’s 1964 story CHITTY CHITTY BANG BANG: THE MAGICAL CAR, and Boyce delivers… Berger adds comical artwork—he even sneaks in a diagram of Bond’s Aston Martin—creating a Chitty that any kid would be thrilled to own. This first volume in a planned trilogy is hilarious and endlessly entertaining.
—Publishers Weekly (starred review)

Although the story is inventive and picturesque, with billionaire crooks, a visit to Madagascar, and a guest appearance on a French reality show called Car Stupide, most of the humor in this very funny novel is a result of the family’s interactions with one another. Berger’s lively cartoon illustrations depict each phase of Chitty’s reincarnation in loving detail and bring the resourceful Tootings to life… A witty sequel.
—School Library Journal (starred review)

Boyce’s modernized sequel to Ian Fleming’s classic faithfully reflects the elements of the original, and the nods to Fleming’s book and the subsequent movie make this retread of the ultimate family road trip even more enjoyable… The Tootings, however, hold their own when it comes to aptitude for zany adventures, so even readers with no knowledge of Dick Van Dyke or Truly Scrumptious will want to tag along for the family’s run-ins with car-obsessed thieves, giant squids, and rogue spies. Berger’s energetic line-and-wash illustrations depict a thoroughly modern biracial family, completing the successful retooling of a beloved classic. Mr. Potts would be proud.
—Bulletin of the Center for Children’s Books

Unlike other trendy returns to classic British stories, this isn’t a narrative sequel to Ian Fleming’s 1964 children’s book. Rather, the esteemed Boyce revisits the general concept of auto-aerial exploits as their camper van, rehabbed with a mysterious old engine found in a junkyard tree, flies the Tootings across the globe, dodging evildoers and reassembling itself with missing pieces, such as headlights from the Eiffel Tower. The tone is contemporary, becoming much more Lemony Snickety as the plot progresses. The novel stands on its own as a satisfying, fresh family adventure, and readers will look forward to two forthcoming volumes.
—Booklist

Ian Fleming’s strong-minded auto takes a new road trip, and if its passengers are largely just along for the ride, it’s still a grand outing… The old racer’s still good for another lap-and maybe more.
—Kirkus Reviews

Any sequel worth the name would require plenty of crackpot humor and absurd villains and a dose of magical realism, all of which happily burst from the pages of CHITTY CHITTY BANG BANG FLIES AGAIN, a novel for 9- to 12-year-olds that puts the famous racing car in a modern setting… A jolly good ride.
—Wall Street Journal

Frank Cottrell Boyce creates a fitting tribute to the Ian Fleming classic with this companion volume starring the loving Tooting tribe and a family camper with a will of its own… Boyce makes the family dynamics the greatest source of humor in a book the whole family can enjoy. A clever homage…
—Shelf Awareness

This diverting read moves right along, thanks to the deadpan humor and warm relationships.
—Disney FamilyFun