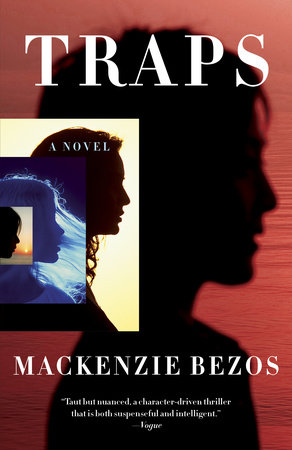 The questions, discussion topics, and suggestions for further reading that follow are intended to enrich your discussion of MacKenzie Bezos’s novel Traps.

MacKenzie Bezos’s engrossing novel tells the story of four very different women whose paths intersect—briefly, but significantly—in ways that will transform each of their lives forever.

Dana is a beautiful young security guard trained in special ops. She can disarm a bomb and perform emergency surgery, but is terrified of committing to the man she loves.  Jessica is an Oscar-winning actress whose father keeps selling her out to the paparazzi.  Vivian is a seventeen-year-old prostitute who will do anything to protect her twin babies.  Lynn is a recovering alcoholic living in isolation on a ranch in Nevada.  How their fates collide—and how that collision offers each of them a chance at redemption and renewal—is the subject of this emotionally powerful, finely crafted, richly textured novel.

1. In the novel’s opening scene, the narrator describes the sensation Dana feels each time she lowers her thick protective helmet over her head at the start of a mission.  “It muffles her hearing, but right away (she will never understand this about herself, but she will continue to crave it) her heart rate slows and her focus sharpens.”  How does this relate to your understanding of Dana’s character in the first chapter?  Look also at her conversation with her supervisor about her heart rate and her performance during the exercise with the dog. What is it that eludes her understanding, and what is it that she craves?

2. Discuss Dana’s relationship with her colleagues.  Look in particular at the descriptive passage on page 8, which begins, “Velasquez is another of the firm’s agents—he has worked protective shifts with Dana a hundred times—and Corey Sifter coached her through a high-speed-emergency driving course and an evacuation simulation in a smoke- and flame-filled room, but neither man has ever been shown a photo on her BlackBerry or heard her describe a movie she saw over a weekend or watched her drink a beer.”   How much does Bezos reveal in the course of the novel about the provenance of Dana’s issues with intimacy and personal  boundaries?   Are there hidden psychological reasons for Dana’s caution and unease?  How much of her self-protectiveness at work do you think has to do with her gender?

3. Discuss your impressions of Ian. He is unlike any other character in the novel and, indeed, might be considered Dana’s polar opposite. Are they truly opposites?  Are there any unexpected similarities between them? What do you think binds them together?  Given Dana’s need for control, do you find it odd that she would be drawn to such a free spirit?

4. One of the first things we learn about Jessica is that her father is subjecting her to an extreme form of emotional blackmail. How has this altered and narrowed her life?  What do you think of the choices she has made for herself and her family?  The life she describes to her husband on page 28 is rich in familial connection and love: “I am not hiding! I’m more social than you are!  I’m with people all the time…I’m sharing what we have! I’m making this a place the girls can be proud of.  A beautiful shared community with a huge homemade extended family.”  Is she lying to herself or is this true?  How much of Jessica’s life is shaped by fear?

5. What are your impressions of the relationship between Jessica and Akhil?   What are their perceptions of each other?  Look especially at Akhil’s ruminations about Jessica’s inner beauty on page 25, concluding with, “If Akhil is her hero, Jessica is the closest he has to any religion…”  Jessica holds Akhil in similarly high esteem, and has since the moment of their first meeting, which Bezos describes in detail on page 28.  What special qualities does each bring to their marriage?

6. What is your sense of Vivian’s predicament in the first scene with Marco? She is very different from the other characters in the novel, and yet her circumstances correspond in fundamental ways to the plights of Bezos’s three other principal characters. How?

7. What information does Bezos impart to us about Lynn’s life by inventorying the items left behind by Charlene, and the array of similarly itemized and marked boxes in Lynn’s closet?

8. The objects in Lynn’s desk drawer are similarly revealing of her character, her struggles past and present, and the parameters of her life.  Discuss the list that appears on page 50.

9. Discuss the novel’s structure. Why is it broken up into four days?  How might this relate to Bezos’s themes?

10. Lynn and Dana manage their feelings of vulnerability by becoming exceptionally self-reliant. Jessica and Vivian are tormented by unwanted callers that force them to confront something painful in their pasts. Are there other correspondences between their respective predicaments?  What do they all have in common?  What traits do you think Bezos feels they share? Discuss.

11. How does Carla Bonham’s first message inform your perception of Vivian’s circumstances?  Carla appears in the novel only once, in the novel’s final section, yet she performs a vital function.  How has MacKenzie Bezos managed to create such an appealing and significant character through a series of brief telephone messages?

12. Discuss the scene in which Lynn reads the clipping from the Southern Nevada Gazette dated October 29, 1972. What does the reader learn about Lynn in this scene? How and why is this relevant to her present life?

13. Why does Lynn decide, on putting the clipping back into a weathered manila envelope,  “it’s enough for now—a start.”  What exactly has she commenced?

14. “Then she takes a marker from the drawer below and along the box of spools with her empty bottle and juice glass she writes ‘Lynn’ and opens the closet door, and sets it on a top shelf with the others.”  How is this action symbolic?  Why is it important, and what do you think it symbolizes?

15. Discuss the climactic scene in which Jessica and Lynn see each other for the first time.  This is one of the novel’s most emotional and cathartic moments. How did you feel when Lynn read her list of all the ways in which she had hurt Jessica?  Can there be forgiveness after such calamitous errors?

16. On page 177, Jessica tells Lynn, “I could have skipped it. All the grief he’s caused me and my family.”  Lynn responds, “Apparently not.”  What does Lynn mean?  How does this relate to the novel’s themes?  What do you think MacKenzie Bezos is suggesting about the nature of misfortune?

17. Discuss the passage about Dana, from Day 4, that begins, “On the drive home, how is she different?”   In what sense could this question be asked about each of the four women?  What has changed, specifically, for Dana?

18. “Sweet are the uses of adversity, / Which, like the toad, ugly and venomous, / Wears yet a precious jewel in his head.”  This is the novel’s epigraph, taken from Shakesepeare’s As You Like It. How do these lines express the novel’s central themes?

MacKenzie Bezos was born and raised in Northern California and studied creative writing at Princeton University.  Her first novel, The Testing of Luther Albright, was published in 2005. She lives in Seattle.

Death and Other Happy Endings

The Middle of Somewhere

The Cranes Dance
Back to Top