At the Bottom of Everything Reader’s Guide 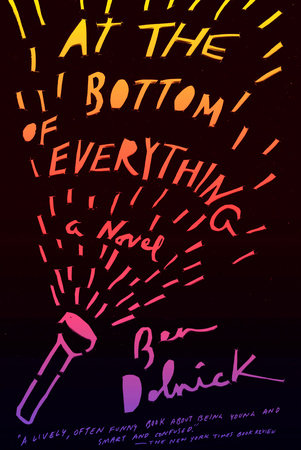 At the Bottom of Everything Reader’s Guide

print
At the Bottom of Everything Reader’s Guide

The questions for discussion contained in this guide are designed to enhance your reading group’s discussion of At the Bottom of Everything, a stunning novel of friendship, guilt, and madness: two friends, torn apart by a terrible secret, and the dark adventure that neither of them could have ever conceived.

It’s been ten years since the “incident,” and Adam has long since decided he’s better off without his former best friend, Thomas. Adam is working as a tutor, sleeping with the mother of a student, spending lonely nights looking up his ex-girlfriend on Facebook, and pretending that he has some more meaningful plan for an adult life. But when he receives an email from Thomas’s mother begging for his help, he finds himself drawn back into his old friend’s world, and into the past he’s tried so desperately to forget. As Adam embarks upon a magnificently strange and unlikely journey, Ben Dolnick unspools a tale of spiritual reckoning, of search and escape, of longing and reaching for redemption—a tale of near hallucinatory power.

1. The story opens with a focus on Adam and his two most recent relationships. How are his relationships with Claire and Anna similar/different?

2. Looking back, how has “the incident” impacted the rest of Adam’s life? His relationships? His career?

4. Adam spends most of his time at the Pells’ house while in middle school. How much of his friendship with Thomas is based on his interest in Thomas, and how much is his desire to be a part of the Pell family?

5. How are the Pells different from Adam’s mother and stepfather? Do you think the Pells made/shaped Thomas, or did they simply embrace and support his “differentness”?

6. Adam and Thomas react in opposite ways to stressful situations: conflicts in school, the police approaching on the train tracks, and, of course, the accident. Discuss the different ways Thomas and Adam react.

7. How do you think you would react in a situation like “the incident”? What if you were in ninth grade?

8. Thomas and Adam’s friendship deteriorates after the accident. Do you think they would have stayed friends if it had never happened?

9. Did you have friends in school that you no longer see or speak to? Is there anyone who you were close to in your life that you’ve lost touch with that you would drop everything for? Why did you lose touch?

10. Who was Adam helping when he went to India? Thomas? The Pells? Himself?

11. When Adam initially tells of his meeting Thomas, he says, “what set Thomas apart, I think, was that he somehow managed, in his hundred-pound body and New Balance sneakers, to give the impression of being wise” (page 12). Do you think Thomas’s search for wisdom and transcendence are based solely in his guilt? Was he on the path to something higher before the accident, and would he still have taken that direction had the accident never happened?

12. The teachings of Sri Prabhakara promise Thomas transcendence based on a certain removal of personal conscience/consciousness. Would Thomas have reached out to the Batras without this impetus?

13. Should Thomas have gone to the Batras’ house in India? Was his confession for himself or for the Batras? Who do you think it helped? Does Adam, who didn’t admit anything, get anything out of the encounter?

14. Why does Adam go after Thomas in the first place? Why does he continue to try to find him after meeting the Batras?

15. Adam’s ordeal in getting to the cave shows him to be tenacious and determined, the first we have seen this behavior from him. Discuss where this focus might have come from.

16. What happens in the shaft in the cave? Hallucinations from dehydration? Temporary insanity? Transcendence of consciousness?

17. After their rescue from the cave, Adam returns to a “normal” life. Do you think things have fundamentally changed for him? How is he different, and how different is he?

18. Adam calls Charles Lowe (the other driver) to confess what the boys had done. Do you think this will help either one of them in the long run?

20. The fourth part of the novel (post-India) is written completely in emails from Adam to Thomas. Why? Does the wordless communication they developed in the cave still exist? Is that what Adam tells himself to feel better? How does Thomas’s lack of communication affect those around him?

21. Based on his last email, what do you think will happen to Thomas?

22. To what does the title refer, besides the physical aspect of the shaft in the cave?

BEN DOLNICK is the author of the novels You Know Who You Are and Zoology, and his work has appeared in The New York Times and on NPR. He lives in Brooklyn with his wife.
Learn More About At the Bottom of Everything
print

City of Girls
Elizabeth Gilbert
Back to Top