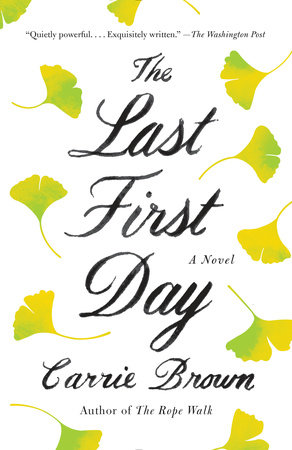 The story of a woman’s life in its twilight, as she looks back on both a harrowing childhood and the unaccountable love and happiness that emerged from it.

Ruth has always stood beside her husband, Peter, the headmaster of the Derry School for boys. The childless couple has a bond that grew out of Ruth’s arrival on his family’s doorstep as a young girl orphaned by tragedy. And though sometimes frustrated by her role as lifelong helper, Ruth is awed by her good fortune in Peter. As the novel opens, we see the Derry School in all its glorious fall colors and witness the loosening of the aging Peter’s grasp—he will soon have to retire, and Ruth is wondering what they will do in their old age, separated from the school into which they have poured everything, including their savings. As the novel unfurls, it takes us back through their days and years, revealing the explosive spark and joy of their love—undiminished now in their seventies—and giving us a deeply felt portrait of a woman from the generation that quietly put individual dreams aside for the good of a partnership, twinned with the revelation of the surprising gift of the right man’s love, which keeps giving to the end.

1. The book opens with a memory of Robert Frost visiting the Derry School, and within the novel there are many references to Keats and Longfellow. What is the author saying about the importance of poetry in our daily lives?

2. In addition to poetry, discuss the role of literature and stories in the novel. How is Ruth’s relationship with reading and books essential to her identity?

3. And conversely, discuss Ruth’s lack of family stories and memories. How do you think her lack of family and family mythology helped form the woman Ruth becomes? After her father is arrested and she learns why she’s had a peripatetic life, how does she find her way out of this tragedy?

4. Why does Ruth later invent stories of her parents and childhood? Can you sympathize or relate?

5. How is the physical environment crucial to the story? How important is the school’s Maine setting? Does this story feel like it could take place only in New England? Why or why not? How did moving around from one town to another in her childhood affect Ruth? Discuss the atmosphere of the various houses in the novel, from the headmaster’s house at the Derry School to Peter’s childhood house to Mary’s house, where Ruth was a teenager.

6. What is the importance to Ruth of never having a house of her own until the very end of the novel? How important is it for you to have a place of your own?

7. Describe the structure of the novel, and why it’s divided into two titled parts. Why is telling the story in this fashion more powerful than a simple chronological order? What emotional impact does this have on the reader?

8. How does the author play with time and memory in the novel?

9. Does the first part of the book, with its focus on a single day complete with flashbacks over the course of Ruth’s life, remind you of Virginia Woolf’s Mrs. Dalloway? Why or why not? What is similar? Dissimilar?

10. What is the importance of family or lack of family, both parents and children, in the novel? Over the years, what does Ruth learn about creating her own family? Who is her true family?

11. Discuss Ruth’s friendship with Dr. Wenning. Why are the two drawn toward each other, and how and why do they form such a strong attachment? What does Dr. Wenning provide for Ruth that Peter doesn’t? Is she more a doctor, mother, or friend to Ruth?

12. What place does Mr. Mitzotakis’s Daedalus story have in the novel? Why does Dr. Wenning share this story with Ruth? Is it a metaphor for something in Ruth or Dr. Wenning’s life? In all of our lives?

13. The man who steals Ruth’s car appears in the novel for one short scene. What is his role in the story? What impact does he have on Ruth?

14. Discuss the line “The beginning of things always contained their end” (page 65).  How does this connect with the title of the novel, and with the novel itself.

15. Ruth “wished she could believe in God. What a relief it would be. But she just couldn’t manage it” (page 274). Discuss Ruth and Peter’s differing views on God and religion. In what does Ruth believe?

17. Why does Peter betray Ruth during their teenage years? Does Ruth forgive him? How does he make up for that betrayal after they rediscover and rekindle their relationship?

18. Why does Ruth put aside her dreams of being a writer? How does she come to find her place at the school alongside Peter?

19. Who are the Finneys? What role do Charlie and Kitty have in lives of Peter and Ruth? How does this change throughout the novel?

20. How are Ruth and Kitty similar/different? How will Kitty’s role at the school be different from Ruth’s? What does this have to say about generational differences between the two women?

Carrie Brown is the author of five previous novels and a collection of short stories. She is the recipient of numerous awards, including a National Endowment for the Arts fellowship, the Barnes and Noble Discover Award, the Janet Heidinger Kafka Prize, and, twice, the Library of Virginia Award. Her short fiction has appeared in One Story, Glimmer Train, The Georgia Review, and the Oxford American. She taught for many years at Sweet Briar College in Virginia, where she lives with her husband, the writer John Gregory Brown. She is now the distinguished visiting professor of creative writing at Hollins University.
Learn More About The Last First Day
print

She Poured Out Her Heart

Can I Get an Amen?
Back to Top