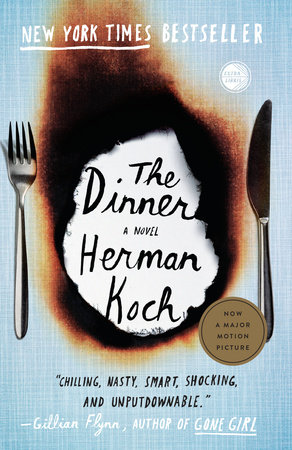 1. How did your opinion of Paul and Serge shift throughout the novel? How might the story line have unfolded if it had been told from a mother’s point of view?

2. In what way do the courses of a meal—from aperitif to digestif—echo the experience of savoring a suspenseful novel? As the waiter described each delicacy in The Dinner, did the food appeal to you, or did you share Paul’s belief that it was pretentious?

3. What do you think of the sympathy Paul and Claire feel for their son? As a parent, how far would you go to defend your child?

4. Do Michel and Rick represent the indifference of their generation, or are teenagers more socially conscious in the Information Age?

5. How much influence do Claire and Babette have over their husbands? How do they define good mothering?

6. The novel opens with Paul’s commentary on how much Serge irritates him. What accounts for their attitude toward each other? Does Paul’s animosity run deeper than typical sibling rivalry?

7. Discuss Paul’s and Serge’s career paths. What does it take to succeed in politics compared with succeeding in the classroom? What skills do the Lohman brothers share?

8. Ultimately, who is to blame for the homeless woman’s death? What does the novel indicate about the responsibilities (or irresponsibility)of the upper class? What separates sympathetic souls from heartless ones?

9. Discuss the portrait of a marriage that Paul paints as he recalls Claire’s illness and confrontsthe possibility of losing his family. Why is Claire so protective of Paul? What keeps their relationship going?

10. In chapter 30, we see the details of Paul’s approach to history and humanity. As you watched him lose his teaching job, did you perceive him as someone who is ill or simply selfish? Or rational?

11. What does the story of cousins Michel and Rick say about nature versus nurture? How do you think Beau/Faso sees his adoptive family? What have they taught him about getting ahead?

12. How did you react to Claire and Michel’s “solution”?

13. What commentary does the novel offer about the author’s homeland? What aspects of The Dinner would change if it were set in Washington, D.C., rather than in the Netherlands?
Learn More About The Dinner
print

Everything I Never Told You

The Weight of Blood

In the Woods
Back to Top