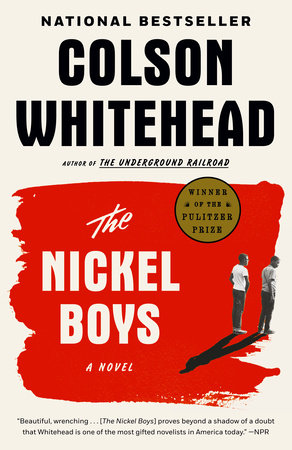 These discussion questions are designed to enhance your group’s discussion of The Nickel Boys by Colson Whitehead.

1. In the prologue, the narrator observes that after the truth about Nickel Academy comes out, “even the most innocent scene – a mess hall or the football field – came out sinister, no photographic trickery necessary.” Can you think of a time in your life when discovering the history of a place (a particular building, a statue, a historical landmark, etc.) dramatically changed your perception of it?

2. Elwood says that both he and Yolanda King “woke to the world,” or discovered racism, at six years old. How old were you when you became aware of racism and inequality? How do you think this experience is different for different people?

3. While in the infirmary, Elwood reads a pamphlet about Nickel that details the contributions the school has made to the community, including bricks from the brick-making machine “propping up buildings all over Jackson County.” What do you think of the ways that the wider community seemed to benefit from labor performed by Nickel students? Do you see any historical or modern-day parallels to this symbiotic relationship?

4. One student, Jaimie, is half-Mexican and constantly shuffled between the “white” and “colored” sections of Nickel Academy. Why do you think the author included a character with Jaimie’s ethnic identity in this story?

5. One of Elwood’s takeaways from Dr. King’s speeches is the importance of maintaining one’s dignity in the face of oppression.  Is Elwood’s decision to escape (and risk the consequences of capture) rooted in the realization that he can no longer maintain his dignity in a place like Nickel?

6. At one point, the narrator writes that “laughter knocked out a few bricks from the wall of segregation, so tall and so wide.” Does humor truly lighten the burden for the boys?  Or is it merely one of the very few things that can’t be taken away from them?

7. Who do you think was the true “villain” of the story? The teachers? The school itself? Something or someone else?

Colson Whitehead is the #1 New York Times bestselling author of The Underground Railroad, which in 2016 won the Pulitzer Prize in Fiction and the National Book Award and was named one of the Ten Best Books of the Year by The New York Times Book Review, as well as The Noble Hustle, Zone One, Sag Harbor, The Intuitionist, John Henry Days, Apex Hides the Hurt, and The Colossus of New York. He is also a recipient of the MacArthur and Guggenheim Fellowships. In 2020, he won his second Pulitzer Prize for Fiction for The Nickel Boys. He lives in New York City.
Learn More About The Nickel Boys
print

Olive, Again
Back to Top