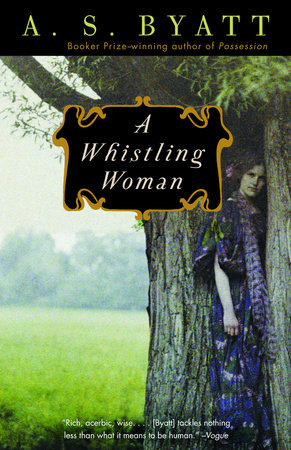 FROM THE BOOKER PRIZE–WINNING AUTHOR OF POSSESSION

The introduction, discussion questions, suggested reading list, and author biography that follow are intended to enhance you group’s reading of A. S. Byatt’s A Whistling Woman, the final novel in the quartet, which includes The Virgin in the Garden, Still Life, and Babel Tower.

Frederica Potter is leading the life of an independent single mother during a time of great social change in Britain in the late 1960s. Television is still an intimidating and powerful new phenomenon; psychoanalysis and genetics present new challenges to students of human behavior; the youth is anti-establishment and anti-intellectual; religion is controversial; and sexual liberation is at full throttle. Amidst this social turmoil, Frederica finds herself personally on the threshold of transition: her relationship with her lover John Ottokar is reaching a crossroads, and, in an attempt to fill her intellectual needs, she embarks on a new career in that extraordinary new medium, television.

Frederica becomes the moderator of an avant-guard intellectual talk show program produced by her former University mentor whereby she is gradually drawn back into University life. At the University, Jacqueline Winwar, a colleague of Frederica’s brother Marcus, studies Darwinian selection in local snail populations. Over in the administrative offices, the University’s intelligentsia plans the culmination of the year’s studies: the exhaustive and esoteric conference on Body and Mind. Just a few meters away, radical students set up a camp called the Anti-University and threaten to ruin the conference. And in an experiment in group therapy gone awry, the enigmatic and troubled Joshua Lamb will become the spiritual leader of a religious cult. Frederica’s connections to these developments deepen as the novel progresses, so that she is personally rocked by the bizarre climax of events, which is both cataclysmic and cathartic. Running as an undercurrent through this elaborate plot is the surprising nationwide success of Frederica’s roommate’s fairy-tale novel, Flight North, which features those strange creatures, the Whistlers.

Brimming with ideas and debate, A Whistling Woman is cerebral and cunning. From genetics to religion to gender relations to psychology, no human behavior escapes Byatt’s often hilarious wit. But A Whistling Woman is not just about ideas: central to the story is the very human Frederica who gracefully navigates her personal and professional life through the waves of counter-culture to pursue intellectual and emotional fulfillment.

1. Frederica celebrates and explores the sexual and social freedom women experienced in the 1960s in her television broadcast entitled: “Free Women” [pp. 144–152]. How do the three “free” women in the novel, Frederica, Agatha, and Jacqueline, experience and express their freedom, sexual and otherwise? How is their freedom limited? How do the resolutions regarding the two pregnancies in the novel reflect on women’s (sexual) freedom? Why do the women in the novel all keep their relationships secret, and how does this secrecy reflect on their freedom? Does the novel ever answer Frederica’s question, “What do women want?” [p. 153]? What about her later question, “Who is it that can tell me who I am?” [p. 336]?

2. How do the subjects of Frederica’s television shows amplify certain events or themes of the novel? For example, what is the significance of the images of light and mirrors that appear throughout the novel, such as in the theme of Frederica’s television show (Alice in Wonderland) or, as the first broadcast is entitled, “Through the Looking-Glass” [pp. 140–41] and again in the Manichaean religion as interpreted by the Dun Vale Hall cult [see pp. 234-240, for example]?

3. Would Frederica’s television shows be successful in contemporary society? Would they have even been successful in the United States? What do the reactions of the different characters in the novel to Frederica’s shows reveal about television’s role in society? What view of television does the author intend to convey by having the cult members join Joshua Lamb to watch the static on television on his so-called “Night Watches” [pp. 317–18]?

4. Why does Byatt go into such great depths to develop the evolution of Joshua Ramsden/Lamb’s character? How is religion both his salvation and his downfall? What is Byatt’s commentary on religion, and is religion effective as a tool to make people’s lives better? What is Byatt’s commentary on psychology, and its effectiveness as a tool to cure mental illness?

5. How does religion differ from cult ideology in the novel? How does group behavior differ from individual behavior? What do Brenda’s and Elvet’s letters reveal about cult mentality? Is there an implied parallel between the camp set up by the Anti-University on one side of the University, and the cult being established at Dun Vale Hall on the other side? Why do certain characters remain outside of these “groups” while others are drawn into them? How is group behavior juxtaposed with the intellectual life of Luk or Jacqueline or Frederica?

6. In the debate between genetic determinism and free will that runs through the novel, what does the Ottokar twins’ symbiotic existence prove or disprove? Why does John Ottokar object to Luk Lysgaard-Peacock’s studies of the “cost” of normal sexual reproduction [p. 330]? What impact might Luk’s studies have on contemporary views on genetics and reproduction?

7. Does the syllabus for the Conference on Body and Mind demonstrate that science and humanities subjects are interrelated? Does Byatt’s interweaving of plot and characters support the argument that art, science, religious life, and intellectual life are all interwoven and interconnected? How are the scientists compared to and contrasted with the artists in the novel? Which group is better situated to understand or comment upon human behavior? How does Frederica’s television show compare to the Body and Mind Conference as a forum for ideas?

8. Frederica meditates, “All the recent movements—the student Left, the dreamier counter-culture, the religious communities, had seen the nuclear family as a static thing, a source of oppression, the wrong kind of social form and structures. Who is the father was an outdated Victorian question” [p. 422]. Does the resolution of A Whistling Woman affirm or denounce these counter-family movements of the 1960s or affirm a traditional family structure or neither? Is it significant that the seemingly perfect new “family” formed by Agatha, Saskia, Frederica, and Leo [p. 13] dissolves by the end of the book with Agatha forming a more traditional family with Gerad Wijnnobel [p. 423]?

9. The lecture schedules of the Anti-University participants were blown from the marquees and shredded, and the shreds were blown into trees. Of these scraps, Byatt writes, “Some of the more mystical Anti-Universitarians thought these bleaching strips represented Tibetan prayer-rags. Others thought they were not nice and represented the last vestige of capitalist conspicuous waste. No one fetched a ladder to take them down” [p. 287]. And of student protestor Nick Tewfell, Byatt writes that many years later he became a cabinet minister in Tony Blair’s cabinet [p. 377] What is the tone of these passages and does it convey the author’s opinion of the student protestors? How do the University administrators and mainstream academics view the Anti-Universitarians? Can one body exist without the other?

10. Who are the Whistlers in Agatha’s fable and what do they symbolize? Is it significant, in light of Luk’s studies of bower birds, that the Whistlers chose the bodies of birds, rather than some other animal? Why does Luk tell Frederica to “whistle harder. Louder” [p. 417]?

11. In what ways is Byatt’s novel stylistically both traditional and contemporary? How does Byatt use different voices, both in letters and in dialogue, to vary the texture of the novel and move the plot along? Is Frederica a modern heroine?

12. Daniel gives Frederica his opinions about the ending of Shakespeare’s late comedies: “The human need to be mocked with art—you can have a happy ending, precisely because you know in life they don’t happen, when you are old, you have a right to the irony of a happy ending—because you don’t believe it” [p. 401]. Is the reader to interpret the ending of the novel in this light, or is Daniel just being a pessimist? Does the novel have a “happy ending”?

14. The list of names of Byatt’s characters is amusing and ironic: Elvet Gander; Avram Snitkin; Paul-Zag; Joshua Ramsden/Lamb; Lyon Bowman; Waltraut Ross; Jonty Surtees; Luk Lysgaard-Peacock; Gideon and Clemency Farrar; and on it goes. How do the characters’ names reflect their personalities and their role in the novel? Does the explanation of the origin of Ramsden’s name prove its significance or its absurdity [p. 116]?

A. S. Byatt was born in Yorkshire England in 1936. She is the author of Possession, the winner of the Booker Prize in 1990 and the Irish Times/Aer Lingus International Fiction Prize. A Whistling Woman is the fourth in a quartet of novels, The Virgin in the Garden, Still Life, and Babel Tower. She has also written the novels The Biographer’s Tale and The Game, two novellas published together as Angels and Insects, and four collections of shorter stories, Elementals, The Djinn in the Nightingale’s Eye, The Matisse Stories, and Sugar and Other Stories.

A distinguished literary critic, her nonfiction works include Unruly Times: Wordsworth and Coleridge, a collection of essays and book reviews entitled Passions of the Mind, and two books on the British novelist Iris Murdoch.- Educated at Cambridge, she was a senior lecturer of English at University College, London. She lives in London.

A Closed Eye
Back to Top