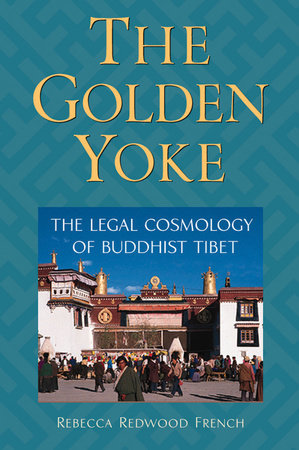 The Legal Cosmology of Buddhist Tibet

About The Golden Yoke

The “golden yoke” of Buddhist Tibet was the last medieval legal system still in existence in the middle of the twentieth century. This book reconstructs that system as a series of layered narratives from the memories of people who participated in the daily operation of law in the houses and courtyards the offices and courts of Tibet prior to 1959. The practice of law in this unique legal world, which lacked most of our familiar sign posts, ranged from the fantastic use of oracles in the search for evidence to the more mundane presentation of cases in court. Buddhism and law, two topics rarely intertwined in Western consciousness, are at the center of this work. The Tibetan legal system was based on Buddhist philosophy and reflected Buddhist thought in legal practice and decision making. For Tibetans, law is a cosmology, a kaleidoscopic patterning of relations which is constantly changing, recycling, and re-forming even as it integrates the universe and the individual into a timeless mandalic whole. The Golden Yoke causes us to rethink American legal culture. It argues that in the United States, legal matters are segregated into a separate space with rigidly defined categories. The legal cosmology of Buddhist Tibet brings into question both this autonomous framework and most of the presumptions we have about the very nature of law from precedent and res judicata to rule formation and closure.

“A work of the highest caliber. A must-read for anyone who is not satisfied with either romanticism or negative propaganda and wants a realistic picture of life in old Tibet.”—Robert A. F. Thurman

“Rebecca French has written one of the two best books of the last twenty years on the legal cultures and legal history of Asia. . . . French will surely be the last anthropologist to have studied an undiluted, pre-modern, literate legal system by talking to its practitioners.”—Andrew Huxley, Yale Law Journal