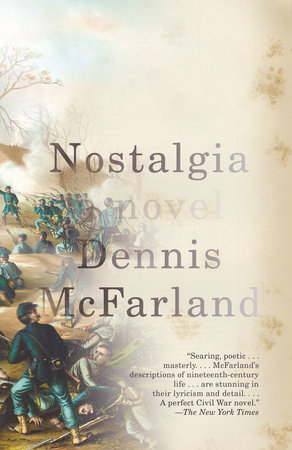 The questions for discussion contained in this guide are designed to enhance your reading group’s discussion of Nostalgia. The themes in this novel are varied and complex. If there are time constraints in your discussion, you may want to focus on one particular theme. The author has generously provided a list of books for further reading that can help guide you.

From best-selling author Dennis McFarland, an extraordinary Civil War novel: the journey of a nineteen-year-old private abandoned by his comrades in the Wilderness, struggling to regain his voice, his identity, and his place in a world utterly changed by what he has experienced on the battlefield.

In the winter of 1864, young Summerfield Hayes, a pitcher for the famous Eckford Club, enlists in the Union army, leaving his sister, a schoolteacher, devastated and alone in their Brooklyn home. The siblings, who have recently lost both their parents, are unusually attached, and Summerfield fears his untoward secret feelings for his sister. This rich backstory is intercut with stunning scenes of Hayes’s soul-altering hours on the march and at the front—the slaughter of barely grown young men who, only days before, whooped it up with him in a regimental ball game; his temporary deafness and disorientation after a shell blast; his fevered attempt to find safe haven after he has been deserted by his own comrades—and, later, in the Washington military hospital where he eventually finds himself, now mute and unable even to write his name. In this twilit realm, among the people he encounters—a compassionate drug-addicted amputee, the ward matron who only appears to be his enemy, the captain who is convinced that Hayes is faking his illness—is a gray-bearded eccentric who visits the ward daily and becomes his strongest advocate: Walt Whitman. This timeless story, whose outcome hinges on the fellowship that is forged in crisis, reminds us how deep are the wounds of war, not all of which are visible.

1. As the book opens, Summerfield Hayes is nineteen. Does he seem young, or older than his years? In what ways is he already an adult? Discuss the atmosphere of his childhood home and how it prepares you as a reader for the difficult choice he makes in going to war.

2. Sarah feels that her brother’s enlistment is a fateful desertion. Summerfield feels he must do his duty. What else might drive a young Summerfield to join the army?

3. Describe the relationship between Sarah and Summerfield. How does it change by the end of the book? What tests it and what strengthens it?

4. The theme of desertion remains constant throughout the book. Deserters from the army (if caught) are shot. Hayes is deserted by his company in the Wilderness. Sarah sees Summerfield’s leaving as an act of desertion. Both Summerfield and Sarah feel deserted by their parents. Discuss this subject in its many aspects.

5. The men whom Summerfield meets in the army are not known to him long. Why does he feel so close to them? Do you think that, in time, he will be able to remember them with simple fondness, or will his memory of them be forever intertwined with the harshness of the battle?

6. The Battle of the Wilderness was an actual Civil War battle, and the Plank Road, the Brock Road, and Hamilton’s Thicket are real places. What else does “the Wilderness” represent? Discuss what was most powerful, disturbing or moving about Hayes’s perceptions in the Wilderness.

7. How much does the historically accurate battle material affect our understanding of Hayes’s experience? What other elements in McFarland’s writing create the realistic atmosphere of battle?

8. During the battle, Hayes sees the deaths of Clahane, Flowers, and Leggett. What makes him keep fighting?

9. The battle as described is a mix of smoke and confusion and death. How closely do you think this might resemble a real battle, then and now? What are the differences?

10. The plot of the story wanders back and forth in time as Summerfield wanders in search of his company, and the flashbacks continue once he is in the hospital. How do these “nostalgic” interludes with his sister and parents help him survive?

11. While in the hospital, why doesn’t Summerfield speak?

12. Is the company of other injured soldiers like Raugh and Casper a comfort to Hayes? Compare them to his nightmares/visions of Leggett and Billy Swift.

13. Hayes’s stay in the hospital seems almost an intermission in his life. Dr. Bliss, Matron, even Captain Gracie and Babb enter and exit, never to be seen again. Discuss the importance of this stage in Summerfield’s life.

15. What does the “character” of Walt Whitman bring to the story? What does he bring to Summerfield? How does Whitman see the patients differently from others who work in the hospital, and why?

16. Post-traumatic stress disorder has been mentioned in history by writers from Herodotus to Shakespeare, but the first U.S. military hospitals for PTSD weren’t set up until after the Civil War. What about the circumstances of Civil War created so many cases of “nostalgia”?

17. Summerfield spends much of this story trying to remember his friend Billy Swift. Discuss how the mind struggles against itself in a traumatic situation.

18. Will Hayes ever forgive himself for Billy’s death? Do you think he will find Billy’s brother?

19. There are two train rides featured in the book (pp. 71–72 and 275–276). The first is the train that brings the wounded Summerfield to the hospital; the second takes Summerfield home to Brooklyn. “A raging world, hurtling them through the night. A train. Not dead. Beyond understanding.” Compare the two passages in terms of Hayes’s mental state.

21. Summerfield comes home to many changes: Sarah’s engagement, the rearrangement of their parents’ house, etc. Is this forced readjustment of his memories helpful in forcing an adjustment to his mental state?

22. What can Walt Whitman say to Sarah that Summerfield cannot? Why can’t Hayes explain, and how is this an extension of his illness in the hospital?

23. Do you think Summerfield will see Anne again?

25. What does baseball mean to Hayes? What does the game bring to the book? How does the history of the sport influence the way Americans look at baseball today?

26. How do you think the diagnosis of nostalgia in the post–Civil War era is different from a diagnosis of PTSD today? What are the similarities and differences?

27. To what degree does the book leave you with a “happy ending”?  Do you feel that Summerfield will be healed? What will he carry with him from the incidents in the book?

Dennis McFarland is the best-selling author of six novels: Letter from Point Clear, Prince Edward, Singing Boy, A Face at the Window, School for the Blind, and The Music Room. His short fiction has appeared in The American Scholar, The New Yorker, Prize Stories: The O Henry Awards, Best American Short Stories, and elsewhere. He has received a fellowship from the National Endowment for the Arts and the Wallace E. Stegner Fellowship from Stanford University, where he also taught creative writing. He lives in rural Vermont with his wife, the writer and poet Michelle Blake.
Learn More About Nostalgia
print

Captain Putnam for the Republic of Texas
Back to Top