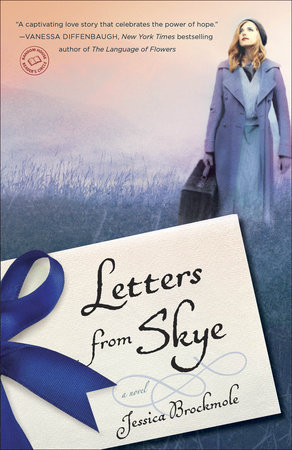 A Conversation with Jessica Brockmole and Kate Alcott

Kate Alcott was a reporter covering politics in Washington D.C., where she and her husband still live. She is the author of The Dressmaker and The Daring Ladies of Lowell.

Kate Alcott: Your story maps the lives of two solitary souls who open up to each other in a way that wouldn’t have been possible without letters. How do you think the story of Elspeth and Davey would have played out in our Internet world?

Jessica Brockmole: There are some aspects of the story that I think could only work with letters, and with the specific era in which the letters were written: the social restrictions on a man writing to a woman, and the woman responding, the unhurried pace in which Elspeth and David’s relationship unfolds, the interruption of the war, the almost painful anticipation of waiting for letters sent in wartime, the desperate reliance on ephemeral pieces of paper to hold together a relationship.

Yet, in many ways their story is still relevant today. People fall in love online—­whether through emails, instant messages, interactions on forums, or social media sites. They go through the early stages of a relationship, sometimes without a picture exchanged, relying solely on the written word and the shared passions lying between the lines. Though they don’t often have to wait so long for responses, the anticipation is still there, as is the anxiety about building something through nothing more solid than sentences.

If Elspeth and Davey were telling their story now, via email, the lags might not be there. They wouldn’t have to worry so much about messages waylaid or messages lost (though, as we all know, emails occasionally do disappear into the ether). Yet there would still be counted moments between replies, joy when the replies finally came, anxiety about that first meeting, about hearing words spoken rather than seeing them written. The power of the written word exists no matter what the medium.

KA: What gave you the idea to tell your story solely through ­letters? Could you tell us more about the benefits and pitfalls of that structure?

JB: One reason that I decided to tell Elspeth and Davey’s story solely through letters is that I really enjoy reading real collections of historical letters. I’m fascinated by what’s said and what’s left unsaid, by the story told between the lines. I thought this would be an intriguing way to write a novel, limiting myself in format, yet allowing the story to unfold in a very organic manner.

Another big reason was that I had just moved to Scotland, an ocean away from friends and family. We had to, out of necessity, shift our communication to the epistolary. We had to trust in our words. I found it intriguing how relationships could be held together with nothing but words and sentences (even though those words are mostly emailed these days), without touch and sound. I wanted to explore that in a book.

There were certainly difficulties in limiting myself to this structure. Description of setting and of character had to be approached carefully, so as to sound natural in a letter. Recounting events that involved both the sender and the recipient, such as the three times Elspeth and Davey meet, were tricky. The reader needed to experience those meetings, but both characters already had and didn’t need to recall every detail. I had to strike a balance between story and structure, between giving the reader the necessary information without sacrificing the authenticity of the ­letters.

KA: Were Elspeth and Davey based on real people?

JB: They weren’t based on real people, but I’m sure that both hold characteristics of myself. Like Elspeth, I’m hesitant to venture far from home. I’m sometimes turned so inward that I can lose hours to poetry. Like Davey, I use books as security in a turbulent world, as lucky charms to hold tight to when life seems uncertain. Like Margaret, I’m fascinated by family history. Like Finlay, I sometimes find it hard to apologize. I think it’s unavoidable when writing to prevent little pieces of yourself from sneaking into the story and the characters.

KA: What kind of research did you do?

JB: Unsurprisingly, I read a lot of letters and postcards written during the time, both from published works, from digital archives, and from my own personal collection. I did read many between sweethearts—­from soldiers on the field of battle and the loved ones waiting at home—­but I discovered that those weren’t always the best representatives of epistolary voice from the era. Soldiers’ letters came with a filter. They were always subject to the censor and were often meant to be shared among friends and family at home. It wasn’t uncommon to read aloud a new letter to the larger family group. Many of these letters were polite and formal and careful, even to wives or sweethearts.

To really get a more representative feel for the epistolary language of the time, especially between correspondents who wrote for nobody but each other, I had to look at other exchanges. I read letters between siblings, between best friends, between young couples writing in secret. I read letters written outside of wartime, in the relative freedom of peace. I read letters from men and women, from those young, old, and in-­between. The voices in these letters often felt more relaxed, somehow more true. They chatted casually and unguardedly. So, while the letters from the front gave me specifics about life in a warzone and the emotions carried through battle, all of the details needed for my story, many of the other letters gave me the language that I needed to tell it.

KA: You create a deep sense of place in your novel. What is it about Skye that drew you to that setting?

JB: When I visited Skye years ago, I was struck by the starkness of the landscape, but also by the rich beauty. The rain, the sea, the impossible green of the hills, centuries of myth tucked along the coast. Though I hadn’t written poetry for years, I wanted to then, as I felt ordinary prose couldn’t do the place justice. I began researching the island during the world wars and found more reason to set a novel there. There was such a strong sense of isolation, especially during the First World War, a feeling (at least among some) that the conflict was distant enough to not affect them. I thought this would be intriguing to explore, through a character connected to the war, but not initially expecting to be impacted by it.

KA: You’ve also framed your story between the universal truths and tragedies of two world wars. What do you hope your readers will take away from this novel?

JB: I’d like readers to think about the sense that history can and does repeat itself. Love happens, in and out of wartime. Family secrets and family quarrels happen, regardless of where in the world you are. A generation and a war apart, the same struggles exist. Reading through wartime letters, I see this over and over, the same sorts of heartbreak and worry and joy that people face today.

KA: What are some of your favorite novels—­and why?

JB: Like Davey, my favorite book is very much a security blanket. It’s the classic A Tree Grows in Brooklyn, a book I love as much for its history and for its complex, real characters as for the role it plays in my life. It’s the last thing I pack in moments of upheaval—­college, moves, hospital stays—­and the first thing I unpack.

Apart from that steady favorite, my list changes often, every time I read something new that I can’t stop talking about. I read and enjoy a lot of novels contemporary to the eras I write, like All Quiet on the Western Front or Humphrey Cobb’s wrenching Paths of Glory. Though not contemporary to that era, I was blown away by Sébastien Japrisot’s A Very Long Engagement, which brought me to laughter and to tears. I strive to write like that.

Other favorites from recent years include the often-­reread Alyson Richman’s The Lost Wife, Jamie Ford’s Hotel on the Corner of Bitter and Sweet, Joanna Bourne’s The Black Hawk, and M. L. Stedman’s The Light Between Oceans. I love books with strong characters, with enduring love, with difficult decisions. And, of course, history.

KA: What are your writing habits?

JB: Though I do write every day, I don’t have a set routine. In fact, I intentionally mix things up to keep from growing complacent. I am constantly changing location, to various spots both in and out of the house. The few constants, though, are my music, which is always going in the background, and a cup of tea. Something about curling my hands around a steaming cup of tea really helps me to focus.

KA: How long did it take you to write Letters from Skye?

JB: I wrote the first draft of Letters from Skye in ten months of steady writing, and then gradually revised over the following several years. It was the first novel I completed and, as I wrote others and learned more about my process, I was able to apply that knowledge to Skye.

KA: Are you working on a new book? Can you share anything with us about your next project?

JB: I am! My next book is also set during the Great War and centers around a pair of artists—­one Scottish, one French—­trying
to recapture a lost summer of innocence in the midst of war.
Learn More About Letters from Skye
print

Vanessa and Her Sister

The Song of Hartgrove Hall

To Dance with Kings
Back to Top