The Other Language Reader’s Guide 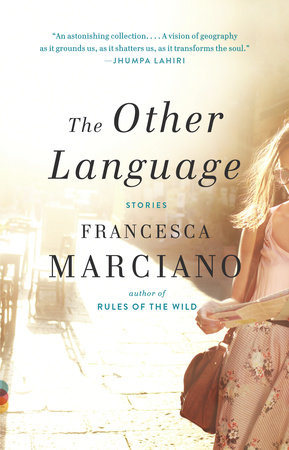 The Other Language Reader’s Guide

print
The Other Language Reader’s Guide

The questions, discussion topics, and other material that follow are intended to enhance your group’s conversation about The Other Language, a breakthrough, transporting collection of stories from internationally acclaimed author Francesca Marciano.

Hailed by The New York Times as “a natural-born storyteller,” the much-admired author of Rules of the Wild gives us nine incandescently smart stories, funny, elegant, and poignant by turns, that explore the power of change—in relationships, geographies, and across cultures—to reveal unexpected aspects of ourselves.

Taking us to Venice during film festival season, where a woman buys a Chanel dress she can barely afford; a sun-drenched Greek village at the height of summer holidays, where a teenager encounters the shocks of first love; and a classical dance community in southern India, where a couple gives in to the urge to wander, these remarkable stories bring to life characters stepping outside their boundaries into new passions and destinies. Enlivened by Marciano’s wit, clear eye, and stunning evocations of people and places, The Other Language is an enthralling tour de force rich with many pleasures.

1. How does the very first, and title, story of the collection explore the chasms and common ground that can be found between different cultures through language? Consider Emma’s observation of how her brother Luca and Nadia relate—“They no longer needed a common language to get along”—and her own almost magical, unconscious assimilation of English (11). What happens to people when they are forced to speak a language not their own—do they stay the same or become someone else?

2. In “The Other Language,” the three siblings who lose their mother at a very young age assume that “death must be an impolite subject to bring up in conversation, a disgrace to be hidden, to be put behind” (7). How does this belief affect Emma’s developing relationships with her brother and sister; her father, David; and later, Jack? What are the other characters’ relationships to loss and to death?

3. Travel is the jumping-off point for many of the stories. How are characters both bound and liberated by a sense of “home”?

4. What are some reasons people in these stories travel, alone or with others—physically as well as metaphorically? Consider Stella in “Big Island, Small Island,” Lara in “The Presence of Men,” and Mrs. D’Costa in “The Club.”

5. What do you think is behind the way that Pascal and Caterina play their game in boutiques, in “Chanel”? Is the promise of Caterina’s dress fulfilled, even indirectly, by the story’s end? Why or why not? And what does Venice as a particular location add to this story?

6.  What roles do clothes and “dressing up” play in one’s ambitions and sense of self and identity in “Chanel,” and throughout the collection? Consider what being “in fashion” means in the stories “The Presence of Men,” “An Indian Soirée,” and “Roman Romance” as well.

7. Similarly, what role does music play, especially rock and roll, in helping various characters uncover their desires and achieve idealized versions of themselves? Consider “Roman Romance” and “An Indian Soirée” as well.

8. How does Marciano’s own background, as an Italian who writes in English, inform her narrative style? Could you sense this multicultural, and even specifically Italian, point of view in the way she observes the world, draws her characters (Italians and non-Italians alike), and uses English to describe certain ideas, places, or people?

9. In “Big Island, Small Island,” what is it about seeing Andrea in his new environment that makes Stella so uncomfortable? Is it only the place itself and the way Africa changed him, or is it something else, perhaps having to do with Stella herself?

10. How would Andrea and Stella’s reunion have been different without Carlo Tescari’s presence? Who really is the biggest “outsider” among the characters in this story (91)?

11. What changes the relationship between Lara and Mina in “The Presence of Men”? Are they united more by their vulnerability toward and attraction to men, or their resistance to them?

12. What does Lara mean when she says that “delayed pain was the story of her life: it was exactly for this reason some people had called her an optimist and others a fool” (147)? Who is most responsible for this pain? And do you think Lara’s behavior around Leo and Ben makes her seem more optimistic or foolish?

13. Many of Marciano’s protagonists are women. What does looking so closely through that lens tell us about the nature of relationships today? How does the husband’s point of view in “An Indian Soirée” add to the collection’s representation of love and desire, as well as marital and midlife dissatisfaction—what he calls “this lack of want for life” (172)?

14. How does this story’s structure of alternating perspectives reveal the couple’s fundamental misunderstandings of each other? Do you think it was their trip to India, a place with “too many layers, multiple souls, [and] myriad messages” that caused an inevitable rupture, or might they have stayed together if they’d never left home (178)?

15. What are the short- and long-term effects of racial and ethnic stereotypes on the characters in “The Club”?

16.  For Mrs. D’Costa, is it more harmful or soothing to feel nostalgia for her old self and old life with her late husband, Victor? How does she turn her wounds both past and present into positive energy, despite her losses?

17. How does Marciano capture the way people from different cultures interpret foreign behaviors and customs, both seriously but also in a humorous sense? Consider the book  the narrator in “The Italian System” is writing, and her take on American as well as Italian culture. How do both sets of interpretations get upended by the story’s ending?

18. In “Quantum Theory,” what comfort does Sonia find in being in a place, and finding love, where “one could vanish, be lost, be found and rescued by strangers” (249)?

19. What is so painful about the way Drew breaks up with Elsa in “Roman Romance,” and about the confusion that comes from the megahit song people think is about her? Consider both the painting  Judith Slaying Holofernes and the story’s eponymous song. What do they both suggest to you about the role of art and artifice in fashioning a sense of identity?

Francesca Marciano is also the author of the novels Rules of the Wild, Casa Rossa, and The End of Manners. She has written several screenplays, including Don’t Tell, which was nominated in 2005 for an Academy Award in the category of Best Foreign Language Film. She lives in Rome.
Learn More About The Other Language
print

Friend of My Youth

The Love of a Good Woman

Dance of the Happy Shades
Back to Top