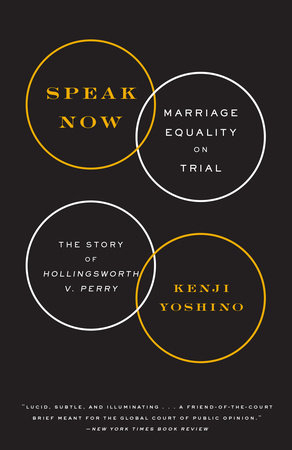 A renowned legal scholar tells the definitive story of Hollingsworth v. Perry, the trial that will stand as the most potent argument for marriage equality


In 2008, California voters passed Proposition 8, rescinding the right of same-sex couples to marry in the state. Advocates for marriage equality were outraged. Still, major gay-rights groups opposed a federal challenge to the law, warning that it would be dangerously premature. A loss could set the movement back for decades. A small group of activists, however, refused to wait. They turned to corporate lawyers Ted Olson and David Boies—best known for arguing opposite sides of Bush v. Gore—who filed a groundbreaking federal suit against the law.
A distinguished constitutional law scholar, Kenji Yoshino was also a newly married gay man who at first felt ambivalent about the suit. Nonetheless, he recognized that Chief Judge Vaughn Walker’s decision to hold a trial in the case was momentous. Boies and Olson rose to the occasion, deftly deploying arguments that LGBT advocates had honed through years of litigation and debate. Reading the 3,000-page transcript, Yoshino discovered a shining civil rights document—the most rigorous and compelling exploration he had seen of the nature of marriage, the political status of gays and lesbians, the ideal circumstances for raising children, and the inability of direct democracy to protect fundamental rights. After that tense twelve-day trial, Walker issued a resounding and historic ruling: California’s exclusion of same-sex couples from civil marriage violated the U.S. Constitution. In June 2013, the U.S. Supreme Court denied the final appeal in Hollingsworth v. Perry, leaving same-sex couples in California free to marry.

Drawing on interviews with lawyers and witnesses on both sides of the case, Yoshino takes us deep inside the trial. He brings the legal arguments to life, not only through his account of the case, but also by sharing his own story of finding love, marrying, and having children. Vivid, compassionate, and beautifully written, Speak Now is both a nuanced and authoritative account of a landmark trial, and a testament to how the clash of proofs in our judicial process can force debates to the ultimate level of clarity.

1. Before reading Speak Now, what did you know about the history of marriage equality litigation in this country? What did you learn that surprised you?

2. Yoshino argues that the trial in Perry was “the best conversation” about same-sex marriage he had ever encountered, deeming it more rigorous than “any legislative hearing, any academic debate, or any media exchange”? Do you agree? Why or why not?

3. When Loving v. Virginia was filed, some thirty states had already legalized interracial marriage. When Perry was filed, same-sex marriage was legal in only four states. Would you, like most major gay-rights organizations at the time, have declined to file Perry so soon?

4. At the press conference where Olson and Boies first announced they were filing the Perry lawsuit, they used only the American and California flags as a backdrop. They did not use the rainbow flag associated with the gay-rights movement. What did that decision signal to the media? To the gay-rights groups? Would you have made the same decision?

5. One of the most famous moments in the trial came during the summary judgment hearing, when Judge Walker asked what harms would arise as a result of same-sex marriage and Cooper responded: “I don’t know.” How did Cooper’s answer come back to haunt him? Should it have? How persuasive was Cooper’s argument that those words were taken out of context?

6. Judge Walker originally sought to broadcast the trial online or to other courthouses in California. Why was his request denied? What impact did the controversy over broadcasting the trial have on the rest of the proceedings? When, if ever, should trials be televised?

7. Under Prop 8, same-sex couples retained nearly all the legal benefits of marriage, but the state did not consider their unions “marriage.” Why was the word “marriage” so important to the plaintiffs? Did you agree with Olson that a domestic partnership is a pale alternative to a marriage?

8. The four plaintiffs—Katami, Perry, Stier, and Zarrillo—testified about the daily humiliations they encountered because they could not marry. Why did these incidents bother the plaintiffs so much? Were these “microaggressions” serious enough to warrant litigation?

9. One of the central disagreements between the parties in Perry was the definition of the word “marriage” itself. In what specific, meaningful ways did their definitions differ?

10. In the United States, legislatures are not supposed to enact laws based solely on religious values. However, in states where citizens can enact laws by direct vote, this restriction is extremely difficult to enforce. Do you consider this problematic? What are the advantages and disadvantages of a system like California’s, which makes it very easy to change the constitution?

12. What does Yoshino mean when he says that Boies and Olson tried to elicit both “narrative compassion” and “statistical compassion”? What are some examples of this strategy during the trial?

13. Though Boies and Olson repeatedly compared Perry to Loving v. Virginia, Yoshino contends that the struggle for gender equality was more crucial to the acceptance of same-sex marriage. What is his reasoning? Do you agree?

14. Yoshino introduces himself early in the book as someone whose own life was transformed by marriage equality. In what ways did the author’s personal story diminish or enhance your trust in him as a narrator? What, if anything, did these personal interludes add to the book?

15. What does marriage mean to you personally? In the future, would you like to live in a world in which more or less social emphasis is placed on marriage?

Kenji Yoshino is the Chief Justice Earl Warren Professor of Constitutional Law at New York University School of Law. A graduate of Yale Law School, where he taught from 1998 to 2008, he is the author of Covering: The Hidden Assault on Our Civil Rights and A Thousand Times More Fair: What Shakespeare’s Plays Teach Us About Justice. Yoshino’s writing has appeared in the Los Angeles Times, New York Times, and Washington Post. He lives in New York with his husband and two children. Follow him on Twitter at @kenji_yoshino, or visit him at KenjiYoshino.com.
Learn More About Speak Now
print

Who Killed the Constitution?

The Obama White House and the Supreme Court
Back to Top