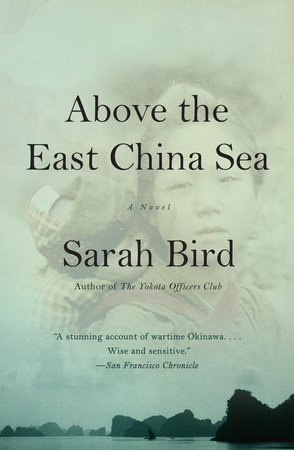 The questions, discussion topics, and reading list that follow are intended to enhance your reading group’s discussion of Above the East China Sea, Sarah Bird’s poignant and affecting novel about two teenage girls living decades apart who share a profound and unexpected bond.

Evocative and beautifully rendered, Above the East China Sea is a powerful story of two teenage girls whose lives, separated by seventy years, are inextricably linked by loss. Set on Okinawa inthe present day and during World War II, when the island was part of the Japanese Empire, the novel follows Luz, an air force brat struggling to cope after the death of her older sister, and Tamiko, a native girl with an indomitable will and whose life is in peril after American troops invade her homeland and the largest land-sea-air battle in history commences. Through the intervention of the ancestral spirits of the island, these girls’ lives become entangled in ways as unexpected as they are, ultimately, inevitable.

In present-day Okinawa, Luz is floundering. An air force brat since birth, she is worn out by the military’s endless uprootings and is dangerously at odds with her hard-ass sergeant mother. The wedge between them grows after Luz’s older sister, who was also her best friend, soul mate, and protector, is killed during the Afghan War. Unmoored from the one emotional anchor in her rootless life, and too depressed to make yet another set of temporary friends, Luz contemplates taking her own life. It is at that point of desperation that Luz is taken on a journey of discovery that cracks through her shell of wounded cynicism, as the ancient wisdom of the island guides her to uncover truths about her family’s past.

In 1945, Tamiko struggles to balance her dedication to family and country as the occupying Japanese forces prepare to sacrifice every man, woman, and child to delay the inevitable American invasion of the mainland. When her older sister leaves home to join the other Princess Lily girls, a group of sheltered high school students assigned to nursing duties in Japan’s horrific cave hospitals, Tamiko, filled with patriotic fervor, follows. As the war between the Americans and the Japanese escalates, Tamiko endures unimaginable hardship and witnesses unthinkable acts of violence,. After her older sister abandons her and the rest of her family is killed, Tamiko views suicide as heronly option. Though she finds peace through her actions, her soul will remain eternally restless until she is reunited with the other members of her family in the afterworld.
As their two stories intertwine, greater truths about Tamiko’s history and Luz’s heritage are revealed. Lyrical as it is gritty, Above the East China Sea is a powerful meditation on life, legacy, mourning, and the tragic inevitability that it is always the young who pay the heaviest price for their country’s imperial ambitions.

1. Luz and Tamiko have a shared experience of loss that binds their lives together. Explore the sisterly bond in each relationship. Are there any similarities between Luz and Codie’s relationship, and Tamiko and Hatsuko’s? Describe how Luz and Tamiko eachdeals with the loss of herolder sister, and how eachcopes with those feelings.

2. How do the themes of duty and honor manifest throughout Above the East China Sea? Are there any similarities in how Codie and Hatsuko approach their service to their country? How do Luz and Tamiko express disapproval toward their sisters’ loyalty?

3. The military brat experience is explored very openly throughout Above the East China Sea. What unique aspects of the experience are revealed in the novel? How does the shared experience of being a brat connect Luz to her friends? Why does Luz regard the Gung Hos with such disdain?

4. How much did you know about Okinawa before reading the novel? After learning the highly significant role that Okinawa has played in our country’s defense strategy ever since World War II, were you surprised at how little we know about the island? Do you understand better now why the current dispute between China and Japan over a group of uninhabited, oil-rich islands just south of Okinawa is so fraught that Slate magazine  has said that “if World War III takes place anytime soon, this is where it will start”?

5. Describe the role of kami throughout the novel. How do the kami act as a catalyst for discovery? Was it hard to make the leap of imagination required to accept a world ruled by the spirits of the dead?

8. Discuss the scene at Murder House and the meaning of Luz’s vision. How does this experience propel her to search for answers?

9. Luz has a difficult relationship with her mother, and itonly intensifies after the death of Codie. Discuss why mother and daughterclash sooften. By the end of the novel, how does Luz’s perception of her mother change? Why do you think Luzasks her mother to go to the funeral?

10. On page 91, Tamiko’s mother tells her, “From now on your life doesn’tbelong to you. It belongs to me and to your father and our mothers and fathers.” How is this statement proven throughout the novel? How does this emphasis on family legacy create huge differences between their society and our own?

11. Luz expresses that she never really knew her grandmother, but she had very specific sensory memories attached to her presence. After she meets Vaughn and finds out more about Setsuko’s life, does Luz’sperception of her grandmother change?

12. How do Okinawans define themselves as a people? Compare the ways in which Tamiko’s family members describe themselves and their heritage as opposed to how Jake’s family does several decades later. What traits carry over? What has changed in the way they have defined themselves since World War II?

13. Describe the change in Luz as she transitions from a skeptic to one who has felt her life moved by forces beyond her intellectual understanding. How does Jake help her get to that point? Have you ever had a mystical experience?

14. In the beginning of the novel, Luz refuses to make any more new friends. How does her stance change over the course of the novel? Explore her relationship with Jacey. How does this “normal” female friendship help to restore her faith in herself and in others?

15. How do the Okinawans perceive the Americans in present-day Okinawa? Reflect on the scene in which Luz and Jake go to the A&W to meet the yuta. How has Americanization affected the island nation?

16. On page 296, Luz asserts that “Runway lights are home.” What does she mean by this statement? How is the concept of home explored and destabilized throughout this novel? Where do you think Tamiko’s true home is?

17. The last few pages of the novel reveal the circumstances in which Tamiko conceived her child. How does her relationship with her unborn child buoy her, despite the environment of violence surrounding them? Explore the change of narrative perspective that occurs in the last chapter of the novel. Why do you think the author chose to have the last chapter come from the perspective of Tamiko’s child?

18. How familiar with Okinawan culture were you before reading this novel? Were you aware of the statistics about the widespread killing and destruction of Okinawa that occurred during World War II as described on page 238?

19. Compare the imperial aspirations of Japan in World War II with those of our own country after that war. How does the patriotic propaganda differ between the two? How does Japan’s history illustrate the tragic consequences of allowing a government to fall into the hands of militaristic industrialists? How are those dangers heightened when knowledge of the actions and budget of a country’s military isshielded from the people by a screen of security concerns?

Sarah Bird is the author of eight previous novels. She is a columnist for Texas Monthly and has contributed to O, The Oprah Magazine;The New York Times Magazine; Real Simple; Daily Beast; and Salon. She has performed with The Moth and, in 2012, was inducted into the Texas Literary Hall of Fame. Having grown up in an air force family that moved far more than was mentally healthy for a catatonically shy girl with any number of “nervous complaints,” Sarah swears she will never, ever, ever leave her home in Austin.
Learn More About Above the East China Sea
print

Dinner at the Center of the Earth
Back to Top