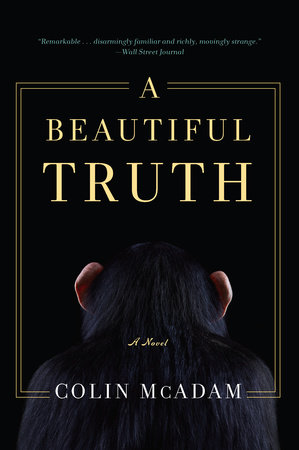 About A Beautiful Truth

Told simultaneously from the perspective of humans and chimpanzees, set in a Vermont home and a Florida primate research facility, A Beautiful Truth—at times brutal, at others deeply moving—is about the simple truths that transcend species, the meaning of family, the lure of belonging, and the capacity for survival.

A portion of this book’s proceeds benefits Save the Chimps, the world’s largest chimpanzee sanctuary.

A powerful and haunting meditation on human nature told from the dual perspectives of a Vermont family that has adopted a chimp as a surrogate son, and a group of chimpanzees in a Florida research institute.

Looee, a chimp raised by a well-meaning and compassionate human couple who cannot conceive a baby of their own, is forever set apart.  He’s not human, but with his peculiar upbringing he is no longer like other chimps.  One tragic night Looee’s two natures collide and their unique family is forever changed.

At the Girdish Institute in Florida, a group of chimpanzees has been studied for decades.  The work at Girdish has proven that chimps have memories and solve problems, that they can learn language and need friends, and that they build complex cultures. They are political, altruistic, get angry, and forgive. When Looee is moved to the Institute, he is forced to try to find a place in their world.

A Beautiful Truth is an epic and heartfelt story about parenthood, friendship, loneliness, fear and conflict, about the things we hold sacred as humans and how much we have in common with our animal relatives. A novel of great heart and wisdom from a literary master, it exposes the yearnings, cruelty, and resilience of all great apes. 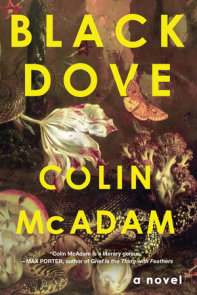 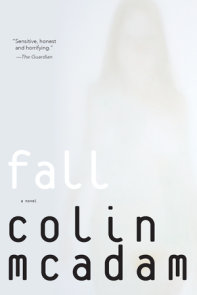 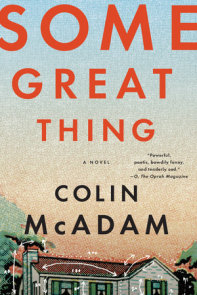 See all books by Colin McAdam

Slate Editor’s Selection for Favorite Books of the Year

Praise for A Beautiful Truth

“The transformative difference in A Beautiful Truth is that its chimps aren’t metaphors or tools for parody but faithfully described individuals . . . both disarmingly familiar and richly, movingly strange.”
—Sam Sacks, The Wall Street Journal

“McAdam teases and turns around language, giving us a creative and wondrous portrait of nonhuman society from the inside out.”
—Dan Kois, Slate

“A beautifully strange and thought-provoking novel.”
—The Independent (UK)

“If A Beautiful Truth lingers long after it is read—and I promise you, it will—it’s because even as Looee becomes a son for Walt and Judy, he becomes for the rest of us a heartbreaking guide to how we treat our closest living relatives.”
—Barbara J. King, author of How Animals Grieve writing for The Washington Post

“As brutal as it is compassionate, A Beautiful Truth collapses the gaps between humans and chimpanzees, bringing us ever closer to the recognition that what we do to the chimps in our care has the moral power to indict us or to set us free, for in so many ways they are us and we are them.”
—Matt Bell, author of Appleseed

“A Beautiful Truth manages to parlay long established and widely disseminated scientific and anthropological facts into gripping and thought-provoking fiction . . . [McAdam] clearly conducted much research for this book.”
—The Miami Herald

“If the book were simply the story of the Ribkes and Looee, A Beautiful Truth would still be a remarkable achievement. But the narrative’s radical other half, which unfolds in loosely alternate chapters and focuses on a group of chimpanzees in a Florida research institute, invoking their perspective, lends the novel a rare depth . . . McAdam’s acknowledgements attest to serious secondary reading—Frans de Waal and Sue Savage-Rumbaugh are both cited—but his depiction of simian life’s limitations turns research into rhapsodic lamentation.”
—The Times Literary Supplement

“Splendid . . . McAdam explores the unhappy history of humans adopting chimpanzees as playthings, curios and family members. Yet in a year when the National Institutes of Health has begun to formally retire its roster of medical-research chimps, McAdam’s novel also sounds an elegy for the chimpanzees who spent their lives in laboratories . . . At its heart, A Beautiful Truth is about voice—who’s talking, who’s listening, what’s understood and what’s not. McAdam makes his novel special by getting inside many heads, especially the chimps’.”
—Cleveland Plain Dealer

“McAdam has created a thought-provoking piece of art for animal lovers and humanitarians alike. The interactions carry a haunting realism that readers can attach themselves to and the characters and language create something quite and sad and addictive.”
—Bookslut

“A Beautiful Truth does an amazing job at telling the stories of chimpanzees in captivity today and it also helps people understand why these amazing souls should be loved, respected and protected in their natural habitat. We hope everyone reads this book and comes to see Chimpanzees as we do.”
—Jo Sullivan, Executive Director of Save the Chimps

“One might expect the chimp point of view to be distracting, but it speaks to McAdam’s talents that they become the most compelling parts of A Beautiful Truth . . . It’s a dark lesson in family, parenting, and community—the way we impose our ideals on others seems to be the beautiful and horrible truth of human nature.”
—Kevin Nguyen, Grantland

“A beautiful novel about consciousness and communication, about how we connect with others and our surroundings, and what it means to truly exist in the world.”
—Benjamin Samuel, The Rumpus

“Colin McAdam’s book may be a novel, but it’s still based on intense research. On a surface level, it tells the stories you’ve heard about before—the childless couple who decides to adopt a baby chimpanzee, the devoted scientist who communicates with chimps in labs, the process of studying pharmaceuticals on primates. But what makes A Beautiful Truth unique is its sincerity, its honesty, and its heart.”
—Greta Johnsen, WCQS Asheville

“[A Beautiful Truth] is grounded in solid research on chimp behavior that, along with McAdam’s distinctive poetic prose, informs readers while enriching a deeply moving story.”
—Booklist

“[A Beautiful Truth] deftly explores the mind of a domesticated ape . . . a serious, thoughtful piece of work.”
—The Telegraph

“The narrative [of A Beautiful Truth] doesn’t just show humans interacting with primates. Inventively, McAdam, gives them a narrative voice and point of view . . . the effect is jarring. McAdam has had to create a new language.”
—The Scotsman

“McAdam’s language reaches into that mysterious place where a word ends and a feeling begins. A Beautiful Truth is a story about love and beauty and our dreams for our children and our inescapable loneliness. The characters, human and animal, are sad and honest and true. I could not put this novel down, and only when I finished it could I breathe again.”
—Kim Echlin, author of The Disappeared

“A work of exquisite sensitivity and prowess, McAdams’ tale is of two species astride not a divide but a continuum, of our longings and resiliencies and the fate we share: being stronger than we are evolved.”
—Alex Shakar, author of Luminarium

“Haunting. Heartbreaking . . . it is a tale of empathy and honesty, deftly told and beautifully rendered.”
—Will Ferguson, Scotiabank Giller Prize-winning author of 419

The portrayal of chimpanzees as individuals with memories isn’t just a fictional device; the commonality of human and chimpanzee conceived here is achieved not by eliminating the traits that divide them but by illuminating the differences that unite them . . . With concise language, this heartbreaking tale of loneliness and remembrance reminds us that understanding is a process of growth and experience.”
—Library Journal, Starred Review

“McAdam writes from the perspective of both humans and apes to both dizzying and daring effect . . . An earnest and oftentimes beautiful book with something to say about the world we live in and how we live in it.”
—Tweed’s Magazine

“A Beautiful Truth is extraordinary, rather beautiful, and experimental.”
—Herald Scotland

“McAdam’s haunting prose gives zingers of crisp images, but also leaves reverberations of desire. He successfully immerses us into the experience of the non-human primates through his careful but creative use of language. It is in its critique of scientific practices that the novel becomes less vivid and more prescriptive, but McAdam successfully negotiates the divide between objective distance and subjective participation that reveals yet again that it takes good fiction to disclose life’s most profound truths.”
—Tottenville Review

“[A] sure-handed and mature work, expertly weaving together shifts in voice and point of view and making use of a poetic language full of direct, sensual metaphors . . . There are no platitudes about the power of love and our need to feel for one another, but rather an understanding of how sad and damaging a business love frequently is.”
—The Toronto Star

“Kafka’s sketch [A Report to an Academy] is an enduring satire on the kinship between humans and primates. McAdam’s novel is an earnest, daring and insistent attempt to show the moral implications of that kinship.”
—The Globe and Mail

“Packs a huge emotional punch. McAdam has effected a true leap of empathy, and in the process pulled off something often claimed to the point of cliché but very rarely achieved in fiction: He makes us see the world and ourselves in a new way.”
—Montreal Gazette

“From joyous to cautious, from hopeful to purely devastating, A Beautiful Truth touches on so many different aspects of human emotion, it’s easy to forget that the perspective is often that of a chimpanzee.”
—The Winnepeg Review

“It’s to McAdam’s credit that Looee is such a living, breathing character, so rich in mind and trajectory that he elicits much empathy . . . Maybe one of the most striking aspects of the novel is what this juxtaposition illuminates. Whether animal or human, the basic patterns of everyday life, the repetition, the need for contact, affirmation and love, are the same.”
—National Post

“Colin McAdam has a way of making simple words matter.”
—Buried in Print

“The crux of the story has to do with loneliness and empathy; people (and nonpeople) are to be marveled at for their ability and willingness to offer fellow creatures the balms of love, compassion and friendship, and McAdam doesn’t flinch from the workings of cruelty and brutality, either. There’s daring, and some pleasure, in the switches of point of view and especially in McAdam’s effort to come up with a subtle, sensitive way to inhabit the chimpanzees and approximate their version of English idiom.”
—Kirkus Reviews

“McAdam has a poetic, impressionistic style, and a sense of humour, and the resulting fantasy is convincing and strangely melancholy.”
—Toronto Globe and Mail

“One of the most important important novels I’ve read in some time.”
—Popcorn Reads

“A profound and thought provoking novel that informs while unfolding its engaging story.”
—Largehearted Boy

“McAdam does a surprisingly thorough job of dispelling the idea that Looee and the other primates in the novel are just lumbering, dumb animals . . . Heart-wrenching. ”
—Bustle

“A Beautiful Truth is an unsettling fictional meditation on evolution, altruism and empathy, revealing just how little separates humankind from animals.”
—We Love This Book