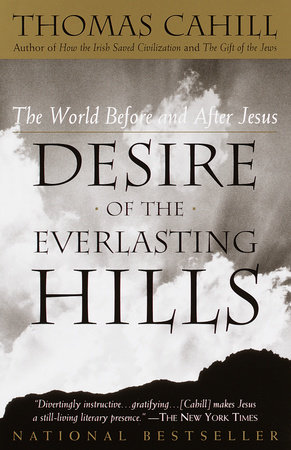 We normally think of history as one catastrophe after another, war followed by war, outrage by outrage–almost as if history were nothing more than all the narratives of human pain, assembled in sequence. And surely this is, often enough, an adequate description. But history is also the narratives of grace, the recountings of those blessed and inexplicable moments when someone did something for someone else, saved a life, bestowed a gift, gave something beyond what was required by circumstance. In this series, The Hinges of History, I mean to retell the story of the Western world as the story of the great gift-givers, those who entrusted to our keeping one or another of the singular treasures that make up the patrimony of the West. This is also the story of the evolution of Western sensibility, a narration of how we became the people that we are and why we think and feel the way we do. And it is, finally, a recounting of those essential moments when everything was at stake, when the mighty stream that became Western history was in ultimate danger and might have divided into a hundred useless tributaries or frozen in death or evaporated altogether. But the great gift-givers, arriving in the moment of crisis, provided for transition, for transformation, and even for transfiguration, leaving us a world more varied and complex, more awesome and delightful, more beautiful and strong than the one they had found.

The questions, discussion topics, and author biography that follow are intended to enhance your group’s reading and discussion of Thomas Cahill’s Desire of the Everlasting Hills. Jewish or Christian, believer or atheist, most people have some understanding of who Jesus is, what his life was about, and how he influences us today. But some understanding is not nearly enough to appreciate the importance of this man and the movement that began with his life and teachings almost two thousand years ago. In Desire of the Everlasting Hills, Cahill plunges us into Jesus’ world, showing us where and how and with whom Jesus lived. He examines Jesus’ teachings and misinterpretations of them. He shows us the Jewish and Gentile evangelists who wrote the Gospels, and he examines the importance of Paul’s letters to the development of Christianity, and spread of Jesus’ teachings.

Who was this man whom so many called Messiah? Whom so many followed, and believed was the medium through which God had fulfilled his promises to Israel, the one who helped bring Gentiles to Judaism? Cahill gives us all that is rich and essential as he answers these questions. His immediacy places us there. It makes us players in the story. When he is finished, we see Jesus in more than one dimension. We see how he belongs to Christians and Jews. We see how ancient Judaism is the root of rabbinical Judaism and of Christianity. So that, finally, we can answer the key question about Jesus: Did he make a difference?

2. Greek and Aramaic were the main languages of Jesus’ world. What role did language play in spreading or slowing the word of Jesus?

3. The Jews of Egypt fought for Caesar, an uneasy partnership that would again come into play during the time immediately preceding Jesus’ death. What are the contradictions of creating peace through military force? How effective was the military in achieving that goal in Jesus’ time and before Jesus? How effective are modern militaries?

4. The author believes that it’s urgent that Christians understand that Christianity is a form of Judaism "if they are to know who they are" [p. 90]. How important is that understanding?

6. The author tells us that Paul insists on sexual and economic equality. What are the controversial parts of Paul’s letters that argue for or against his belief in equality between women and men?

7. The author speaks of "odium theologicum–hatred for those nearby who are religiously similar to oneself but nonetheless different" [p. 184]. Do you see this principle at work today? How can we guard against it?

8. Luke, a Gentile who sat amid the temptation of Greco-Roman society, says that wealth makes a Christlike life very challenging. What is the basis for his conclusion? Was Luke more radical than Jesus on this point?

9. How does John’s Gospel as the source of hurt feelings and exclusivity add to the idea of the Jews as enemies throughout the course of history?

10. It took early Christians nearly four hundred years before they could bear to depict Jesus’ crucifixion–only then had the firsthand memories of this tragedy faded enough to give them some necessary distance. When it comes to images, we no longer receive much or any distance from our tragedies–think of Holocaust images or scenes from recent ethnic cleansing in the Balkans or genocide in Africa. How does such immediacy help or hurt us and our understanding of tragedy?

11. The author asks if our spiritual tradition "has become so universalized that it may be claimed by anyone but can no longer boast any characteristic proponents" [p. 307]. Do you think it has? Can this question be answered?

12. The author believes that the teachings of Jesus are responsible for a shift in consciousness toward peace and against the evils of self-interest. Is there evidence of such a shift?

13. The author suggests that Jesus would have supported a separation of church and state. How does Cahill support this assertion?

14. The author speaks of the authority of the dispossessed when it comes to writing true history. Discuss this in the light of the recent historical or literary writing. Do people on the fringe see the truth more clearly than do the people in power? Which category does the author put himself into, and do you agree?

For Discussion: The Hinges of History Series

1. Each book gives a piece that helps complete the picture of who we are, of our history, of our humanity and acts as a piece in a puzzle. How effective is this type of a reckoning of our past?

2. The author did not write the books in his series in strict chronological order. Instead he traces large cultural movements over many centuries. How does this choice affect the understanding of each book as a piece in the puzzle? Or as an individual work?

3. In his books, the author gets inside the heads and hearts of his subjects, using a very close third-person point of view. How does this choice strengthen his premise? Does it have limitations?

4. The author is Roman Catholic. Is he able to present these histories without being biased by his Catholicism? Does one’s religion (or lack of it) necessarily constrict or color one’s view?

5. Discuss the nature and history of the Irish and the Jews as read in these books. What are their ambitions, their differences? How do they differ from the Romans and the Greeks in all three books?

Thomas Cahill is the author of the bestselling books, How the Irish Saved Civilization, The Gifts of the Jews, and Desire of the Everlasting Hills, comprising Volumes I, II, and III respectively of the prospective seven-volume The Hinges of History series. A lifelong scholar, Thomas Cahill has studied with some of America’s most distinguished literary and biblical scholars. Born in New York City to Irish-American parents and raised in the Bronx, he was educated by Jesuits and studied ancient Greek and Latin. He continued his study of Greek and Latin literature, as well as medieval philosophy, scripture, and theology, at Fordham University, where he completed both a B.A. in classical literature and philosophy, and a pontifical degree in philosophy. He went on to complete his M.F.A. in film and dramatic literature at Columbia University. He studied scripture at New York’s Union Theological Seminary, and recently spent two years as a Visiting Scholar at the Jewish Theological Seminary of America, where he studied Hebrew and the Hebrew Bible in preparation for writing The Gifts of the Jews. He also reads French and Italian. In 1999, he was awarded an honorary doctorate from Alfred University in New York. Thomas Cahill has taught at Queens College, Fordham University, and Seton Hall University, served as the North American education correspondent for The Times of London, and was for many years a regular contributor to the Los Angeles Times Book Review. Prior to retiring recently to write full-time, he was Director of Religious Publishing at Doubleday for six years. He and his wife, Susan, also an author, founded the now legendary Cahill & Company, whose Reader’s Catalog was much beloved in literary households throughout the country. They divide their time between New York and Rome. Cahill is currently working on the fourth volume of The Hinges of History series, which explores the glories of Greek civilization.

1. The New Jerusalem Bible (Regular Edition)
2. W.H. Auden, For the Time Being: A Christmas Oratorio
3. Raymond E. Brown, An Introduction to the New Testament, The Churches the Apostles Left Behind, and The Community of the Beloved Disciple: The Life, Loves and Hates of an Individual Church in New Testament Times
4. Dostoevsky, Fyodor, The Brothers Karamazov
5. Ellsberg, Robert (ed.), Dorothy Day: Selected Writings
6. Shusaku Endo, The Life of Jesus and Silence (a novel)
7. Fitzmyer, Joseph A., The Gospel According to Luke and The Acts of the Apostles
8. Greene, Graham, The Power and the Glory
9. Richard A. Horsley (ed.), Paul and Empire: Religion and Power in Roman Imperial Society
10. Paul Johnson, A History of Christianity
11. Donald Kagan, On the Origins of War and the Preservation of Peace
12. John P. Meier, A Marginal Jew (in four volumes, two already published)
13. Arnaldo Momigliano, Alien Wisdom: The Limits of Hellenization and Essays on Ancient and Modern Judaism
14. Jerome Murphy-O’Connor, Paul: A Critical Life
15. Plutarch, Parallel Lives
16. Chaim Potok, My Name Is Asher Lev
17. E.P. Sanders, Jesus and Judaism
18. Suetonius, Lives of the Twelve Caesars
19. Tacitus, Annals
20. Walter Wink, The Powers That Be: Theology for a New Millennium
Learn More About Desire of the Everlasting Hills
print

The Ninety-Five Theses and Other Writings

The Kidnapping of Edgardo Mortara

The Ultimate Ambition in the Arts of Erudition
Back to Top